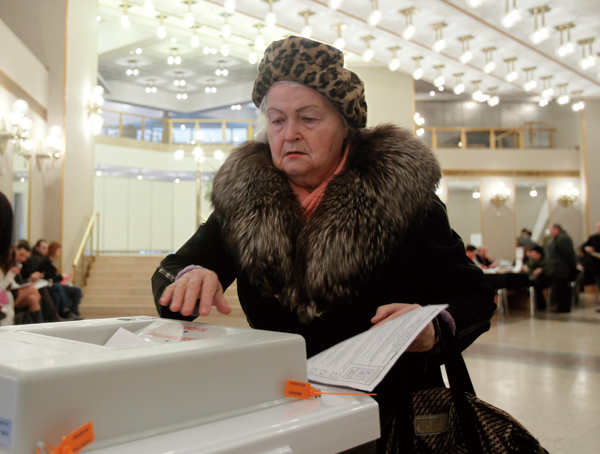 MOSCOW
Monitored by web cameras and a network of volunteer civilian observers, Russians voted Sunday in presidential elections expected to return Vladimir Putin to the Kremlin.
Allegations of widespread vote fraud in last December’s parliamentary elections set off an unprecedented wave of massive protests against Putin, who has remained Russia’s paramount leader despite stepping down from president to prime minister four years ago due to term limits.
The protests, the largest public show of anger in post-Soviet Russia, demonstrated growing frustration with corruption and political ossification in Putin’s Russia. But despite the increased dismay, opinions polls have shown Putin positioned to easily defeat four other candidates and return to the post he held in 2000-2008.
Putin presided over a significant growth in Russia’s prosperity and growing stability that contrasted with the disorder and anxiety of the 1990s, when Boris Yeltsin led Russia’s emergence from the wreckage of the Soviet Union.
“Under Boris Naikolayevich, life was simply a nightmare, but, you know, now it’s OK. Now it’s good, I’m happy with the current situation,” said 51-year-old Alexander Pshennikov, who cast his ballot for Putin at a Moscow polling station.
Putin has dismissed the protesters’ complaints, portraying them as a coddled minority of urban elitists and as dupes of Western countries that he claims want to undermine Russia. But, sensitive to the galvanized opposition, he ordered installation of web cameras at all of Russia’s more than 90,000 polling stations.
How effective they will be in recording or discouraging vote violations was unclear.
Putin’s disdain for the protesters became more marked in the last week of campaigning, as he publicly suggested the opposition was willing to kill one of its own figures in order to stoke outrage against him. That claim came on the heels of state television reports that a plot by Chechen rebels to kill Putin right after the election had been foiled. Some of Putin’s election rivals dismissed the report as a campaign trick to boost support for him.
Protests after the election appear certain.
“People in Russia are not going to recognize Putin’s victory in the first round,” Alexei Navalny, one of the loosely knit opposition’s most charismatic figures, declared flatly last week.
Another prominent protest figure, Ilya Ponomarev, a parliament member from the opposition A Just Russia party, said the protesters’ mood has become more truculent as authorities consistently brushed off their initial demands for nullifying the results of the December parliament election.
“It has evolved from ‘we demand a rerun’ to ‘go to hell’,” he said.
The Interior Ministry called in 6,000 police reinforcements to the capital from other regions, the state news agency ITAR-Tass reported Friday.
Whether Sunday’s vote is seen as honest is likely to be key; a count without reports of wide violations could deprive protesters of a galvanizing issue.
“Cameras cannot capture all the details of the voting process, in particular during counting,” the election observation mission of the Organization for Security and Cooperation in Europe noted in a report on election preparations.
Along with the OSCE mission, tens of thousands of Russians have volunteered to be election observers, receiving training for activist groups on how to recognize vote-rigging and record and report violations.
In the December election, observers from the non-governmental group Golos reported being threatened and kicked out of polling stations. Hostility to the group among officials remains; in January, the head of the Federal Security Service in the Komi republic called the group “extremists” inspired from abroad.
In his past four years as prime minister, the steely Putin remained Russia’s dominant political figure, overshadowing mild-mannered successor Dmitry Medvedev, who spoke often of reforms but accomplished little.
Putin has promised to appoint Medvedev prime minister if he wins the presidency in order to pursue his reform ideas, but many regard Medvedev as lacking the hard-edge political skills to be an effective reformer.
None of the other candidates have been able to marshal a serious challenge to Putin.
A mid-February survey by the independent Levada Center polling agency found Putin getting more than 60-percent support -- well above the 50 percent needed for a first-round win. The Communist Party candidate, Gennady Zyuganov, got support of about 15 percent, according to the survey, which claimed accuracy within 3.4 percentage points. The others — nationalist firebrand Vladimir Zhirinovsky, Sergei Mironov of A Just Russia and billionaire Mikhail Prokhorov — were in single digits.