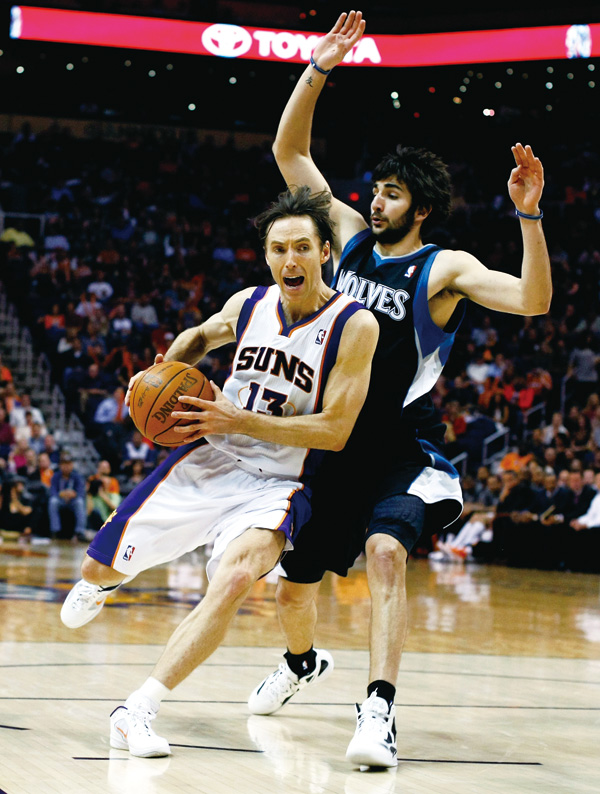 Star Tribune (Minneapolis)
PHOENIX
Whether it was due to the Minnesota Timberwolves’ continued youthful inconsistency or the stressed NBA schedule-maker’s curse, the venerable Phoenix Suns once again turned back time in their 104-95 victory at US Airways Center.
They did so with two guys beyond their 38th birthdays excelling in a game Wolves coach Rick Adelman had called a “character” test.
Thanks to last summer’s long labor lockout that forced a truncated 66-game season and some creative schedule-making, his young team played its third game in three nights on the road Thursday while the Suns went back to work for the first time since the All-Star break.
The Wolves led by 10 points before halftime, then surrendered to two-time league MVP Steve Nash’s playmaking and will and to a Suns team that simply outrebounded and then outran them with its combination of old and young legs.
“They were running, even Grant Hill looked young tonight,” Wolves forward Kevin Love said in his first game from the stomach flu. “That goes to show you right there.”
Hill entered the NBA the summer before Wolves rookie Ricky Rubio celebrated his fourth birthday. On Thursday, at age 40, he scored a season-high 20 points (15 of them in the decisive second half) that fit the night’s theme right along with Nash’s 13-point, 17-assist evening.
Adelman said before Thursday’s game didn’t want to hear any complaining — or excuses — from his players, even though he has done plenty himself in the weeks leading to this quirk in this truncated season.
He just wanted them to overcome.
“Not too well,” Love said when asked how that premise turned out. “It was a character game and we had a chance to step up.”
The Wolves didn’t, slipping back under .500 at 17-18 with their second consecutive losses after they sneaked into winning territory for the second time this season with Tuesday’s comeback victory over the Clippers in Los Angeles.
“I can’t say anything about that because the schedule was what it was,” Adelman said when asked afterward about the evening’s circumstances. “We had our opportunity. We were up six in the third quarter and we couldn’t make a shot. We missed five or six straight open jump shots and then they got it going.”
The Suns’ used a 13-2 run near the end of the third quarter to transform the game from a 70-64 deficit with five minutes remaining into a 77-72 lead with 64 seconds left from which the Wolves never, ever quite recovered. Adelman used the word “panicked” to describe his Wolves when the Suns made their run.
Love played more than 40 minutes once again, one night after he missed Wednesday loss to the Lakers because he felt too sick to play.
“I felt OK,” he said after another 23-point, 10-rebound double-double. “These guys are the ones who played three games in three nights. I almost had Tuesday night off (25 minutes against the Clippers), I had yesterday off and tonight I came out and played a lot of minutes. I felt fine out there, not 100 percent. I just need to get my legs back under me and get some rest.”
Across the locker room, Rubio sat at his stall with his feet soaking in ice after he watched Nash’s masterful performance while he had 13 points and two assists, his second-fewest assist total this season.
“He’s one of the best ever,” Rubio said. “It’s hard to play against him. He controls everything. He knows how to play and he’s always looking for the best option.”