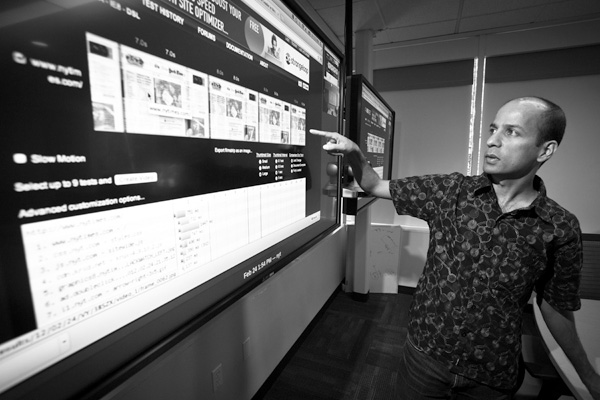 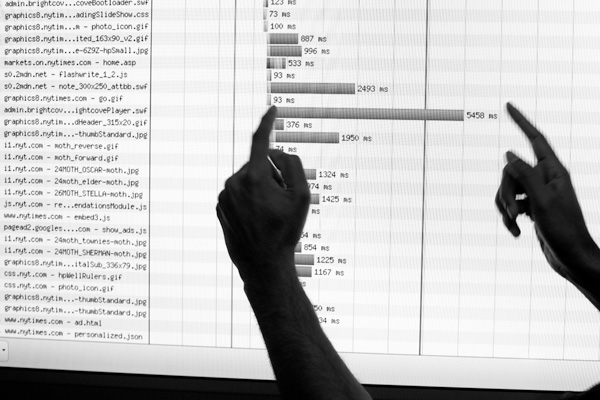 Wait a second.
No, that’s too long.
Remember when you were willing to wait a few seconds for a computer to respond to a click on a website or a tap on a keyboard? These days, even 400 milliseconds – literally the blink of an eye – is too long, as Google engineers have discovered. That barely perceptible delay causes people to search less.
“Subconsciously, you don’t like to wait,” said Arvind Jain, a Google engineer who is the company’s resident speed maestro. “Every millisecond matters.”
Google and other tech companies are on a new quest for speed, challenging the likes of Jain to make fast go faster. The reason is that data-hungry smartphones and tablets are creating frustrating digital traffic jams, as people download maps, video clips of sports highlights, news updates or recommendations for nearby restaurants. The competition to be the quickest is fierce.
People will visit a commerce or news website less often if it is slower than a close competitor by more than 250 milliseconds (a millisecond is a thousandth of a second).
“Two hundred fifty milliseconds, either slower or faster, is close to the magic number now for competitive advantage on the Web,” said Harry Shum, a computer scientist and speed specialist at Microsoft.
The performance of websites varies, and so do user expectations. A person will be more patient waiting for a video clip to load than for a search result. And websites constantly face trade-offs between visual richness and snappy response times. As entertainment and news sites, like The New York Times website, offer more video clips and interactive graphics, that can slow things down.
But speed matters in every context, research shows. Four out of five online users will click away if a video stalls while loading.
On a mobile phone, a Web page takes a leisurely 9 seconds to load, according to Google, which tracks a huge range of sites from the homes of large companies to the legions of one-person bloggers. Download times on personal computers average about 6 seconds worldwide, and about 3.5 seconds on average in the United States. The major search engines, Google and Microsoft’s Bing, are the speed demons of the Web, analysts say, typically delivering results in less than a second.
The hunger for speed on smartphones is a business opportunity for companies like Akamai Technologies, which specializes in helping websites deliver services more quickly. Later this month, Akamai plans to introduce mobile accelerator software to help speed the loading of a website or app.
The government too recognizes the importance of speed in mobile computing. In February, Congress opened the door to an increase in network capacity for mobile devices, proposing legislation that permits the auction of public airwaves now used for television broadcasts to wireless Internet suppliers.
Overcoming speed bumps is part of the history of the Internet. In the 1990s, as the World Wide Web became popular, and crowded, it was called the World Wide Wait. Invention and investment answered the call.
Laying a lot of fiber optic cable for high-speed transmission was the first solution. But beyond bandwidth, the Web got faster because of innovations in software algorithms for routing traffic, and in distributing computer servers around the world, nearer to users.
Akamai, which grew out of the Massachusetts Institute of Technology’s Laboratory for Computer Science, built its sizable business doing just that. Most major websites use Akamai’s technology today.
The company sees the mobile Internet as the next big challenge.
“Users’ expectations are getting shorter and shorter, and the mobile infrastructure is not built for that kind of speed,” said Tom Leighton, co-founder and chief scientist at Akamai, who is also an MIT professor. “And that’s an opportunity for us.”
The need for speed itself seems to be accelerating. In the early 1960s, the two professors at Dartmouth College who invented the BASIC programming language, John Kemeny and Thomas Kurtz, set up a network in which many students could tap into a single, large computer from keyboard terminals.
“We found,” they observed, “that any response time that averages more than 10 seconds destroys the illusion of having one’s own computer.”
In 2009, a study by Forrester Research found that online shoppers expected pages to load in 2 seconds or less – and at 3 seconds, a large share abandon the site. Only three years earlier a similar Forrester study found the average expectation for page load times was 4 seconds or less.
The 2-second rule is still often cited as a standard for Web commerce sites. Yet experts in human-computer interaction say that rule is outdated.
“The old 2-second guideline has long been surpassed on the racetrack of Web expectations,” said Eric Horvitz, a scientist at Microsoft’s research labs.
Google, which harvests more Internet ad revenue than any other company, stands to benefit more than most if the Internet speeds up. Jain, who worked at Microsoft and Akamai before joining Google in 2003, is an evangelist for speed both inside and outside the company. He leads a “Make the Web Faster” program, begun in 2009. He also holds senior positions in industry standards groups.
Speed, Jain said, is a critical element in all of Google’s products. There is even a companywide speed budget; new offerings and product tweaks must not slow down Google services. But there have been lapses.
In 2007, for example, after the company added popular new offerings like Gmail, things slowed down enough that Google’s leaders issued a “Code Yellow” and handed out plastic stopwatches to its engineers to emphasize that speed matters.
Still, not everyone is in line with today’s race to be faster. Kurtz, the Dartmouth computer scientist who is the co-inventor of BASIC, is now 84, and marvels at how things have changed.
Computers and networks these days, Kurtz said, “are fast enough for me.”