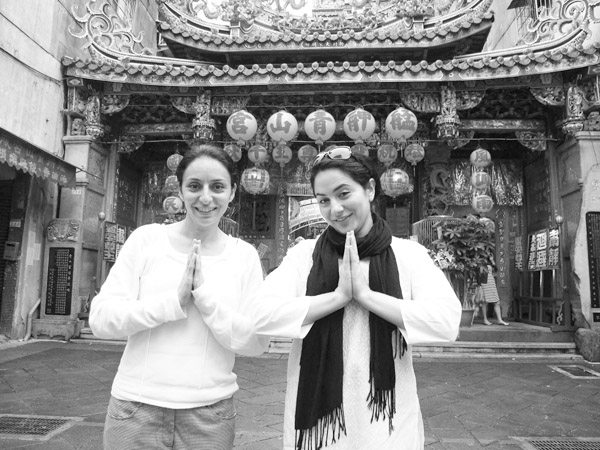 A German movie director and her sister, a scriptwriter, will sponsor a free screening of their latest prize-winning film at a temple in Taipei Friday evening to show gratitude for the film's box office success in Taiwan.
Yasemin and Nesrin Samdereli, new-generation avant-garde filmmakers in Germany, paid to have their latest work, "Almanya - Welcome to Germany," screened at Qingshan Temple in Taipei City's Wanhua District at 6:30 p.m. Friday for free, according to their agent in Taiwan.
Last November, the Samderelis were in Taipei to promote "Almanya - Welcome to Germany" at the Golden Horse Film Festival, Taiwan's equivalent of the Oscars. The story is about a big Turkish family making its first homecoming visit to Turkey after having immigrated to Germany 40 years ago.
During their visit in Taipei, the Samderelis prayed at Qingshan Temple and told General Chang, the main god enshrined in the Taoist temple, that his blessing will be returned if their film proved to be a big grossing movie in Taiwan, with box office sale exceeding NT$1 million (US$33,333).
As of January, "Almanya -Welcome to Germany" has fetched over NT$1.5 million in ticket sales in Taipei, according to the agent.
The free screening on Friday is a gesture to show gratitude to the local deity's blessings -- a common practice in Taiwan.
After the screening in Taipei, the film will also be shown in theaters in central and southern Taiwan this month, the agent said.
"Almanya - Welcome to Germany" -- described by a film critic as a heartwarming, nostalgia-tinged crowd-pleaser and also a manipulative, irresistible tear-jerker -- has won numerous prizes, including the prestigious German Film Prize for the best screenplay.
It is the most commercially successful Turkish German film to date, attracting over 1.4 million viewers in Germany alone.