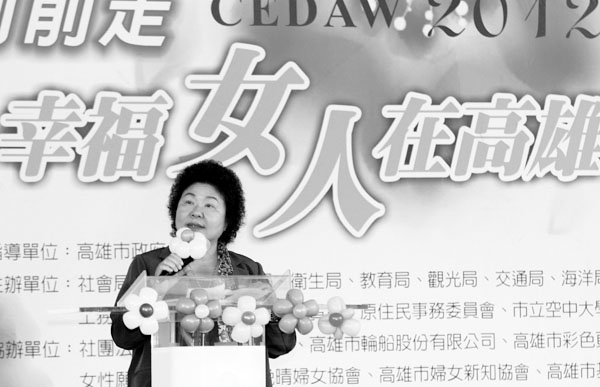 Kaohsiung Mayor Chen Chu will make her first foreign trip since taking over as interim chairwoman of the opposition Democratic Progressive Party to Japan, reports said Friday.
When the party chose her as acting leader on February 22, she was on a tour of the United States. Cuba refused her entry even though it agreed to visas for all the other members of her delegation. It was not known whether interference from China was responsible for the sudden refusal.
Chen, Yunlin County Magistrate Su Chih-fen and Chiayi County Magistrate Chang Hwa-kuan would stay in Japan March 4-9, reports said. They were scheduled to promote food from Southern Taiwan at an international food fair in Tokyo, inspect hydropower installations and meet with Osaka Mayor Toru Hashimoto.
The three women were also planning to donate 750 kilo of Taiwanese bananas to a school in Sendai hit by last year’s March 11 earthquake and tsunami. In May, they would also send a batch of lychees to the same school, reports said.
Chen’s trip comes as the DPP’s Central Standing Committee was supposed to hold a regular weekly meeting next Wednesday. At least four members of the committee will be on the trip to Japan, leading to speculation that the weekly meeting will be canceled.
Since Chen was sworn in last Wednesday, attention has focused on party reforms and policy changes following the DPP’s defeat in the January 14 presidential and legislative elections.
The 61-year-old Kaohsiung Mayor initiated the formation of a reform committee to discuss relevant issues, but she has not yet launched any major ideas.
The DPP will also soon face an election campaign for a vote by party members on a new full-term chairman scheduled for May 27.
Until now, only former Tainan County Magistrate Su Huan-chih and former lawmaker Chai Trong-rong have expressed interest in the race, but media reports have speculated that both Chen and ex-Premier Su Tseng-chang could face each other.
Chen has repeatedly said that she would put Kaohsiung first, a statement interpreted as a sign that she might not be interested to stay on as DPP leader.