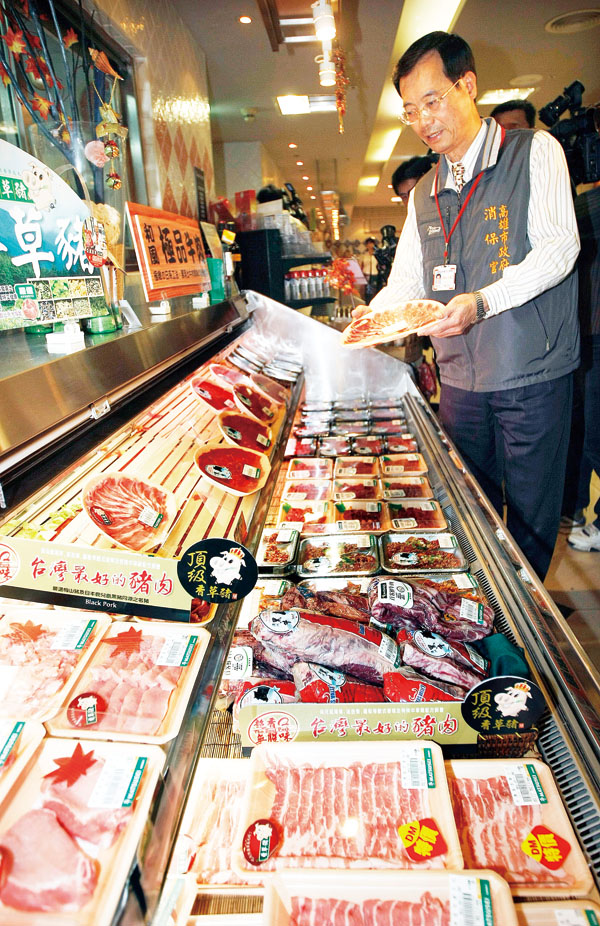 DPP and KMT lawmakers propose a zero tolerance amendment for leanness drugs like ractopamine, which could block the import of meat from the U.S. treated with leanness drugs.

The Legislative Yuan made limited progress Friday to amend the Food Hygiene Management Act which could block the import of meat from the United States treated with leanness drugs.
The caucuses of the ruling Kuomintang, the opposition Democratic Progressive Party and the small People First Party agreed to handle the issue as a priority and to pass on their four different proposals to the Social Welfare and Environmental Hygiene Committee. The committee was expected to discuss the proposals within the next two weeks, but a second reading by the full Legislature could have to wait until May, reports said.
The amendment version proposed by DPP lawmaker Wu Ping-jui wants a zero value for leanness drugs like ractopamine, while KMT legislators Cheng Ru-fen and Huang Chao-shun also mention various other drugs in their separate proposals. The PFP version sets a maximum limit for pesticides and other drugs in foods that should not be higher than the values set by the United Nations.
If the final version incorporates the DPP and KMT proposals, the government will find it impossible to lift the ractopamine ban just by executive order.
Responding to questions from lawmakers, Premier Sean Chen said the beef issue would be decided based on health and scientific concerns, and would not be treated as a chip in exchange for concessions on US arms sales or talks on a Trade and Investment Framework Agreement.
Chen said the government did not have a timetable or a precise stance on the issue, and had not made any promises to Washington. President Ma Ying-jeou told US visitors shortly after his January 14 reelection that his new administration would have a new way of dealing with the ban. Chen said Ma had not handled the issue during his first term because at the time, the government was more concerned with preventing the import of beef from areas hit by mad cow disease.
Foreign Minister Timothy Yang denied that the sudden cancellation Thursday of a visit by US Commerce Under Secretary Francisco Sanchez was related to the beef issue. Lawmakers suggested that the postponement of the March 4-6 trip was a way for Washington to raise pressure on Taiwan to lift the beef ban. A statement from the American Institute in Taiwan attributed the change to ‘unforeseen circumstances’ and did not mention the beef controversy.
The DPP legislative caucus proposed a public debate on the issue, but the KMT there was no such need at the moment. If the dispute about lean meat expanded, it would be beneficial to hold a debate to reach a social consensus, said DPP whip Pan Men-an. He said that public opinion should be allowed to decide whether or not the ractopamine ban should be lifted.
Cabinet members came under fire from lawmakers for saying that fining offenders was up to the health departments of city and county governments. The central government not only was unable to stop the import of tainted beef, but it was also unwilling to bear the responsibility for punishing the companies guilty of importing the products, the opposition said.
Meanwhile, more spot checks turned up beef treated with ractopamine. After popular steakhouses in Kaohsiung were forced to remove US beef off the menu on Wednesday, inspectors found more ractopamine in beef for sale at supermarkets and department stores in Taichung, Hsinchu and Kaohsiung, reports said. Inspections at fast-food restaurants in Taipei showed the hamburger beef had been imported from Australia or Panama.
The health authorities also visited one importer and distributor in Taipei. They ordered a thorough inspection and stopped the company from selling more meat, reports said. As a result, several restaurant chains using meat from that supplier came out with test results showing their beef products did not contain the lean-meat drug.
An anti-ractopamine action group on Friday sued Council of Agriculture Minister Chen Bao-ji and Department of Health Minister Chiu Wen-ta for failing to stop the import of tainted beef.
The COA is hosting the third in a series of inter-ministerial discussions with experts on Saturday. After repeated protests from scholars and consumers’ rights groups, the COA decided for the first time to allow the media to follow the meeting from start to finish on a screen. Critics protested outside the second meeting last week and one of the invited academics even walked out to express his displeasure at the secretive way in which the discussions were handled.
Critics have accused the government of using academics to downplay the health risks of ractopamine and pave the way for its legalization. The government has repeatedly argued it wants scientific data and public health to be the only factors in its eventual decision.
Pig farmers, who have been among the most vocal opponents of an end to the ractopamine ban, are scheduled to protest outside the COA and the Legislative Yuan on March 8.