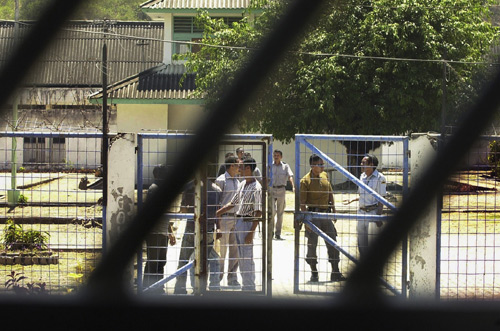 Gangs armed with stones and machetes clashed in the East Timorese capital yesterday, raising fresh security concerns following the recent escape from prison of a rebel leader and scores of other violent inmates.
Hospital officials said at least eight people were wounded in the unrest which broke out after a gang attacked a refugee camp in downtown Dili hotel with stones, witnesses said. International security forces arrived soon after to restore order.
East Timor descended into chaos in May amid fighting between factions in the newly independent country's security forces. Tens of thousands of people still live in temporary camps.
International peacekeepers have largely restored order and a new government has been installed, but sporadic gang fights have continued, mostly based on regional divisions exacerbated by the conflict.
Local and foreign security forces were searching for 57 inmates who escaped from a Dill prison on Wednesday, including renegade military leader Alfredo Reinado, blamed for some of the worst violence in May, and several of his followers.
Prime Minister Jose Ramos-Horta partly blamed the UN and neighboring Australia for the breakout, which has raised tensions in East Timor.
In a telephone interview with Australia Broadcasting Corp. radio, he said the prison was under the control of East Timorese forces, but that Australian peacekeepers must accept some of the blame because they refused to boost security outside.
"I am personally just puzzled why, in spite of our repeated requests for static forces to be outside the prison, this was not done," Ramos-Horta said. "I presume the Australian forces, the U.N., as experts in security, they thought it was not necessary."
Ramos-Horta said it appeared the escaped inmates had accomplices inside the prison.
"Obviously there was a failure of the internal security but the internal security is not armed and obviously there has to be some complicity inside," he said.
Australian Prime Minister John Howard rejected Ramos-Horta's suggestion Australian troops were partly responsible for the escape.
"I am very concerned that these people escaped but I am quite certain the Australian Defense Force has done the right thing," Howard told reporters in Sydney.
Reinado was a leading member of the campaign to oust former Prime Minister Mari Alkatiri.
A prison guard said Reinado told him before the breakout he would return to jail if Alkatiri was also imprisoned. Alkatiri is currently under investigation for allegations he provided guns to a hit squad tasked with killing his political opponents.
"Before Major Alfredo left the prison he told me that he would return when Alkatiri was in prison," prison guard Helio Watumisa Monteiro told The Associated Press. "We are the victims of an unfair tribunal."
Authorities waited more than a month to arrest Reinado following the May violence even though he made no effort to hide and East Timor's President Xanana Gusmao has always refused to criticize his actions, leading some to question whether his rebellion was part of wider moves to get rid of Alkatiri.