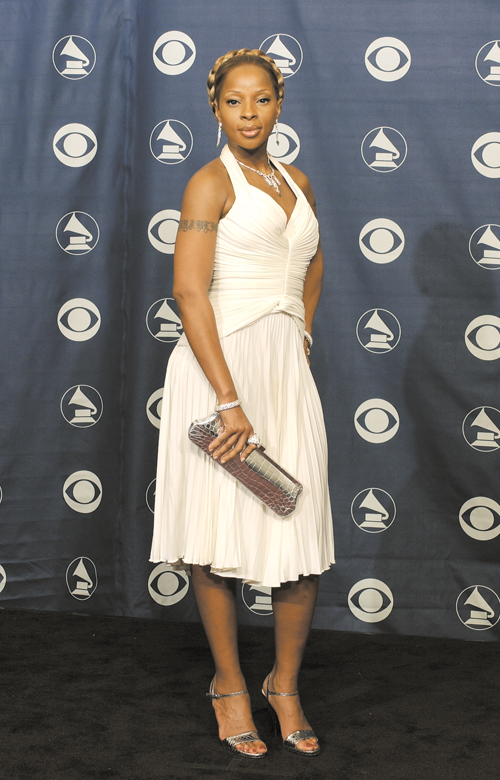 In 14 years, Mary J Blige has won three Grammys, released seven albums that have sold millions of copies worldwide, had numerous top 10 hits, defined ghetto fabulous style, and changed American slang (giving us such bon mots as "What's the 411?" and "Don't need no hateration."). So when "the queen of hip-hop soul" called her seventh album, released late last year, "The Breakthrough," she wasn't talking about a career move.
"Anything that's hard to get through, you got to break through it," Blige says over the phone from Chicago, where she's on a break from her lastest tour. "You either got to kick through it, or punch through it, some kind of way. The door's not going to just be open. Especially when it's things like self-esteem issues, addictions, things that are the hardest things to get through. Once I broke through, with my fan base, I just wanted all of us to celebrate the fact that we could do it."
Blige - singer of such hits as "Family Affair," "Not Gon' Cry" and "No More Drama" - first came to fame as a tough, glamorous woman from the streets of Yonkers, N.Y. She sang gut-wrenching R&B mixed with hard-knocks-life hip-hop. Holding her own in duets with such rappers as Method Man, she was no delicate waif or malleable pop tart. As model Veronica Webb infamously found out when the two women chatted for an Interview story that almost came to blows, Blige wasn't the kind of diva one wanted to mess with.
But beneath the hard exterior was a woman scared and spiraling downward. She was in abusive relationships with men that mirrored the fighting she saw between her parents as a child. She was drinking and partying hard.
"In reality we're all just like little lambs," says Blige, who is as candid and forthcoming as 15 minutes will allow. "We've got hearts, but we've been scorned and messed up by the world so much that we don't know what to do, so we just throw up a guard and say, 'Nobody's ever going to hurt me again. But I need this group of friends, so I'm going to go out and drink with them. I need this comfort zone, so I'm going to do all the things that they like.'
"Once you get a reality check of, 'Oh my God, who am I: I have my arm over here and my leg over here, I'm all spread out. I can't even collect myself at the end of the day and say I love myself and like myself.' That's when you know you've been living for the world for a long time. You've got to really be ready to see it, because when you see it, it's not nice."
Blige saw it about six years ago. She then made a series of life changes. First, she learned to like the person she saw in the mirror every day.
"It was me praying for a way out of the hell that I was in," she says. "I wouldn't call it religion, I would call it a spiritual breakthrough, because the spirit is in me. I just got tired of feeling the way I did about myself: Looking in the mirror and the only time I'm happy with myself is when my hair and makeup is done. What about when my hair and makeup is not done? I need that kind of confidence. I wanted to like myself even when men are not saying I look good, I want to feel good about it. I don't want to cater to people's opinions."
Then, she fell in love, with Kendu Isaacs, who became her husband and manager: "In praying for that kind of strength, I prayed for a man that was honest with me about it, and boy, did I get it."
Sober, married, and a stepmother now, Blige speaks in her songs and interviews with a forthrightness that has become her hallmark. Her lyrics and quotes can be littered with the jargon of therapy - "issues," "self-esteem," "baggage," "breakthrough." But she still sounds like she could kick butt.
"I'm the type of person that I have a strong will, I got to see the ugly," Blige says, talking about dealing with her notorious past. "I've got to see just how stupid I am."
Blige says she knew the title of "The Breakthrough" before she ever started recording. "I titled the album a year before I even went into the studio because I was at that point in my life where I was like, OK, it's time to do it or don't. Because we've been lingering too long in this little comfortable box of denial."
Once she'd named it, the songs came naturally. After the failure of 2003's "Life & Love" album with P. Diddy, the singer worked with a handful of top producers, including Dre, Jimmy Jam & Terry Lewis, Rodney Jerkins, and Will I Am. South Florida's own Cool & Dre produced the album's version of her hit duet with the Game, "MJB Da MVP." And U2 backs her on her cover of their song "One."
At 35, Blige sounds like a woman growing up. But she still is battling her demons, she says - which is why she's in no rush to have kids of her own.
"I think twice about it because I'm still working on some things, within myself. I don't want my child to ever see me go into those dark moments."
Blige bares her soul not because she's using her music as therapy (though, undoubtedly, singing helps), but because she thinks her considerable fan base will relate. The "Breakthrough" track "Good Woman Down" is about how Blige's battles aren't just hers: They're shared - and can be won - by women everywhere.
"Once you break through from the inside," she says, "everything else is going to crack wide loose for you."