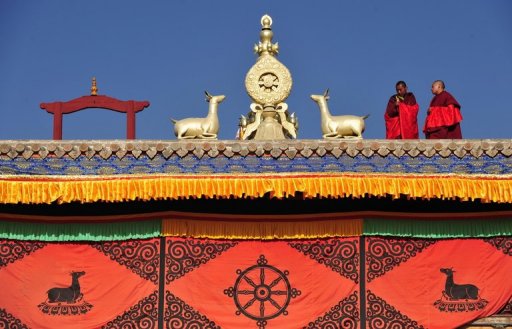 A Tibetan monk died after self-immolating in China over the weekend, state media said Monday, taking to 15 the number of people who set themselves on fire in Tibetan areas in less than a year.

It is the first time the Tibetan-inhabited province has been hit by such a protest. Most self-immolations have taken place in the neighbouring province of Sichuan, in what rights groups have said are protests against perceived religious repression.

It is unclear why Nyage Sonamdrugyu set himself on fire in Gyumai town, part of the Tibetan autonomous prefecture of Golog.

The incident comes after two former monks in Sichuan set themselves on fire on Friday -- one of whom died and another who is being treated in hospital.

Many Tibetans in China accuse the government of religious repression and eroding their culture, as the country's majority Han ethnic group increasingly moves into historically Tibetan areas.

But China rejects this, saying Tibetans enjoy religious freedom and pointing to huge ongoing investment, which it says has brought modernisation and a better standard of living.