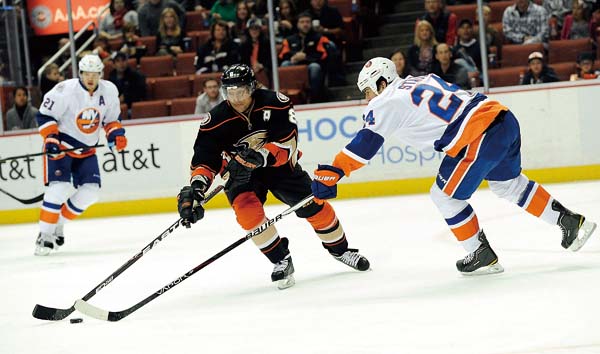 Los Angeles Times
ANAHEIM, Calif.
For once, the script played out exactly the way it was intended.
One beleaguered and frustrated general manager called out his star players in the media. And two of them answered in emphatic fashion in the next game.
Welcome to the Ducks’ crazy, spinning world on ice.
They beat the New York Islanders, 4-2, on Friday night at Honda Center, securing their first win in four games and their second in their last nine. Bobby Ryan scored twice, Teemu Selanne added a goal, Corey Perry had two assists, and captain Ryan Getzlaf scored the game-winner.
Big picture: It was Getzlaf’s first goal in 13 games, third in 30 and first since Dec. 4.
Bigger picture: This was the first game since comments appeared from Ducks General Manager Bob Murray, who said major changes could take place and that only Selanne and Saku Koivu were unavailable in trades. Both have no-trade clauses.
Murray went from Bob the Builder to Bob the Motivator.
“You don’t want to say it was a statement game, but (for) Getzy definitely,” said Ryan, whose second goal, at 9:22 of the third, came on a dazzling shorthanded play, to tie the game, 2-2.
“He’s a guy that wears his heart on his sleeve. The speculation between the three of us over the past month, week or whatever it is, has been exhausting. It’s nice to see him get rewarded because he’s putting in the work, doing the right things, and he’s being a captain, and those are things people don’t see behind the scenes.”
Ryan has been the subject of trade speculation all season, but rumors about his linemates, Getzlaf and Perry, gained traction after the holidays. Murray’s comments cranked up the heat considerably.
“It’s always a challenge,” Getzlaf said. “Our GM is one of the most honest guys around, and he’s going to call it like he sees it. He made a bold move when he got rid of our coach, and we didn’t back him for the first little bit here. Now it’s up to us to get on his shoulders and know what we’re doing here and know what we’re playing for in our spots here.”
It came across the way the Ducks responded after falling behind 2-1 early in the third period. Goalie Jonas Hiller got better as the game went along, which hasn’t been happening of late. This time, the Ducks didn’t fold when the game got tight.
“We got mad instead of hanging our heads when we fell behind,” Ducks coach Bruce Boudreau said. “When Bobby scored his second goal, it lifted the bench and crowd. You have to play with that passion whether you’ve won one or four.”
They scored the game’s final three goals, all in the third period, and looked like giddy kids celebrating. Selanne, whose goal made it 4-2 with 2:54 remaining, even hopped into the glass.
“I was too tired to stop,” Selanne said, smiling.
Said Getzlaf, of his celebration after his goal: “It looked like a playoff game, didn’t it? It was a good feeling.”
They were talking as some of the players’ children played in the dressing room. “Guys, kids are trying to play hockey here,” Perry joked to reporters.
Still, one good move, one good game is just that for the Ducks.
Getzlaf talked about what he has been going through.
“Terrible,” he said. “It’s frustrating for me and I’m sure for a lot of other people in our organization. It’s one of those things I can’t explain. If I had an explanation for it, I would have fixed it long before it happened tonight. This is still one game.”
Enforcer George Parros was scratched because of a strained groin.