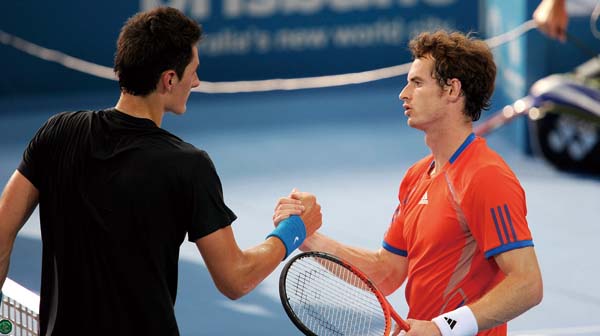 Associated Press
BRISBANE, Australia
Andy Murray had Ivan Lendl in his corner and another ATP final in his sights when he beat Australian teenager Bernard Tomic 6-3, 6-2 on Saturday in the Brisbane International semifinals.
Top-seeded Murray will be playing for his 22nd singles title Sunday when he meets third-seeded Alexandr Dolgopolov, who swept second-seeded Gilles Simon of France 6-3, 6-4 earlier Saturday.
Murray, aiming to break a Grand Slam singles drought for British men that extends back to 1936, hired eight-time Grand Slam winner Lendl as coach earlier this month and the pair met up on Saturday.
The 24-year-old Murray has lost the last two Australian Open finals and is 0-3 in major finals, something he’s desperate to address at Melbourne Park starting Jan. 16.
Murray started the week slowly, dropping the opening sets of his first two matches and complaining of aches and pains, but improved to beat 2006 Australian Open finalist Marcos Baghdatis in straights sets in the quarterfinal and outclassed Tomic in the semis.
“That was good. Served very well today, which is important against Bernard,” said Murray, who fired 13 aces and didn’t give Tomic any breakpoint chances in the 70-minute match. “Just moving so much better. It’s a huge part of my game. When I move well, the rest of my game goes well.
“My movement at the start of the week for me it felt like a one out of 10. Now I feel like I’m moving about an eight or a nine out of 10. Can still get better, but I’m playing well.”
Tomic, a Wimbledon quarterfinalist, stayed on serve until the sixth game, when he worked Murray around with some of the unorthodox angle and drop shots that can unsettle even seasoned players.
But then Murray went on a roll, winning five straight games to go ahead by a set and a break. The result seemed inevitable at that stage, with the No. 4-ranked Murray not showing any signs of rustiness or injuries.
The increase in tempo wasn’t solely to impress his new coach.
“Anytime you start working with someone new it’s different, but I’m just interested in winning,” Murray said. “I don’t mind if it’s ugly, if I played badly or I played great. You just need to fight as hard as you can to get the win. Fortunately today I played well on top of that.
“Whether Ivan was here or not, I still would have put in a tough performance.”
Murray said whatever he and Lendl discussed in terms of strategies and his game management would remain confidential, but he didn’t hide his pleasure at having the former champion watching from the courtside box.
“I’m glad he’s here. I know he’s going to help me. I’ve enjoyed even just the first day with him,” Murray said. “He has a lot of knowledge, a lot of experience. He’s going to help me a lot, I’m sure.”
Dolgopolov reached an ATP final on hardcourts for the first time when he beat Simon.
The 23-year-old Dolgopolov needed treatment for a groin strain during the second set and had his upper right leg heavily strapped, but it didn’t blunt the powerful forehand he used to unravel his French rival.
Dolgopolov finished at a year-end No. 15 in 2011, becoming the first Ukrainian man to finish inside the top 20 since Andrei Medvedev in 1995.
He has lost both of his previous two matches against Murray, including the Australian Open quarterfinals last year.
Dolgopolov said his injury started feeling better as the match progressed and wasn’t concerned about it hampering his Australian Open ambitions. He also thought a match against Murray was ideal preparation for the season’s first major.
“For sure,” he said. “I want to go to top 10 this year and if I want to do that, I have to be competing with these guys.”
The women’s final later Saturday will feature No. 24-ranked Daniela Hantuchova of Slovakia against No. 34 Kaia Kanepi of Estonia.
The 28-year-old Hantuchova, a tour veteran with four titles and more than $8 million in prize money, had an abbreviated run into the Brisbane final when 13-time Grand Slam winner Serena Williams withdrew from their scheduled quarterfinal after injuring her left ankle and Australian Open champion Kim Clijsters retired in the second set of their semifinal with a hip strain.
Kanepi has one WTA title and has lost all three previous matches against Hantuchova, but is on a 12-3 run since the U.S. Open, including wins here against second-seeded Andrea Petkovic of Germany and third-seeded Francesca Schiavone, the 2010 French Open champion.
Clijsters had scans on Saturday which revealed no serious tear and confirmed she’d had a spasm in the tensor fascia lata muscle which helps control movement in the hip.
The WTA said Clijsters would undergo further scans next week but was expected to be fit enough to play the Australian Open.