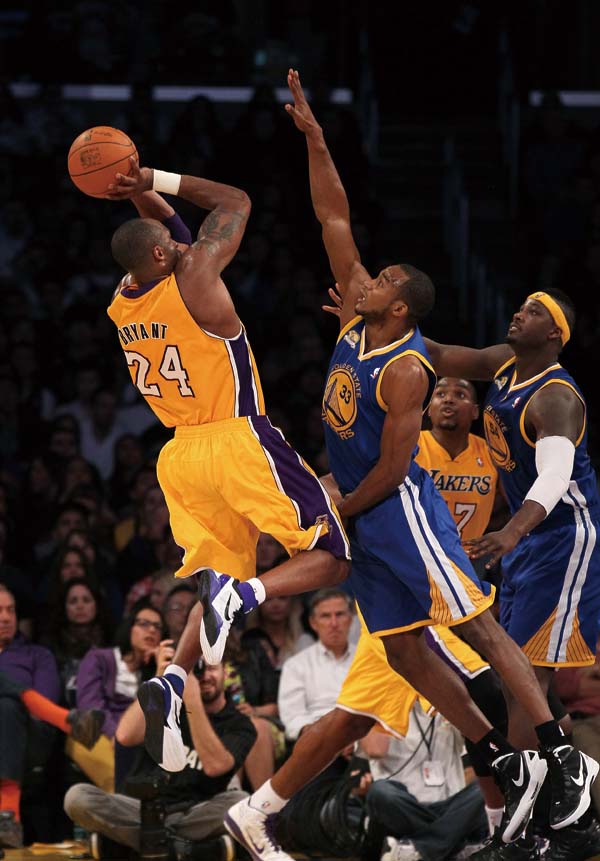 Associated Press
LOS ANGELES
Kobe Bryant’s injured right hand looks like a boxing glove, and his fellow Lakers’ legs are exhausted from a brutal early-season schedule.
That’s still not enough to make Bryant flinch while carrying Los Angeles to yet another home victory over the Golden State Warriors.
Bryant scored 26 of his 39 points in a dynamic second half, Pau Gasol added 17 points and 11 rebounds, and the weary Lakers hung on in the fourth quarter for a 97-90 victory over their upstate rivals Friday night.
Matt Barnes had 16 points and six rebounds before fouling out for the Lakers, who won their fifth straight home game while playing their NBA-high ninth game in 13 days. Los Angeles bounced back from a passionless first half with another strong effort from Bryant, who has three straight 30-point games.
“The important thing was for us to try to pick up our energy on both ends of the floor and play with a little bit more life,” Bryant said.
Bryant’s two missed layups in the opening minutes were another reminder of the 13-time All-Star’s struggles with a torn ligament in his right wrist. Before the game, Lakers coach Mike Brown acknowledged Bryant is receiving painkilling injections before every game, but said he isn’t worried about Bryant’s ability to hold up during the jam-packed NBA schedule.
“We went through stretches where we couldn’t score, and so he carried us,” Brown said. “That’s what great ones do.”
With 7-footers Andrew Bynum and Gasol openly struggling with exhaustion, most of the Lakers’ offensive burden fell on Bryant. He handled it with his usual vicious effectiveness — even if he didn’t approve of his own methods.
“I shot 28 times. I shot too much,” Bryant said.
Golden State led 39-35 after an unsightly first half for both teams, who combined for 23 turnovers. Bryant heated up after halftime, scoring 17 points during the third quarter on a variety of jumpers and drives.
The Lakers then outlasted the injury-depleted Warriors in the fourth quarter for their fifth win in seven games.
Monta Ellis scored 18 points and David Lee had 15 points and 11 rebounds for the Warriors, who have lost seven straight road games to the Lakers. Golden State dropped to 2-5 before returning to Oakland for a three-game homestand.
“A lot of the shots they were making in the fourth quarter were Kobe Bryant fadeaways from 17 feet,” Lee said. “That’s a tough shot to defend. He had a very good game tonight, but he was really the only guy that killed us statistically. It’s tough when he has a night like that.”
Rookie Klay Thompson scored 14 points as Golden State played without high-scoring guard Stephen Curry, who sprained his right ankle Wednesday in San Antonio, and center Andris Biedrins, who also has an injured right ankle.
Nate Robinson scored nine points two days after signing with the Warriors, who scored eight consecutive points to trim the Lakers’ late 11-point lead to 85-82 with 3½ minutes left. Los Angeles responded with Barnes’ fast-break layup sandwiched between two quick baskets from Gasol, putting the Lakers back in control.
Kwame Brown had 13 points for the Warriors while enduring the usual cascade of boos from the Staples Center crowd for the former Lakers big man. Golden State hasn’t beaten the Lakers at Staples Center since March 23, 2008, losing 32 of the last 35 road meetings overall.
“We’ve just got to get tough mentally,” Brown said. “We have such a young team, and we don’t have a real superstar. When the refs starting biting the whistle, we’ve just got to get tougher. They’ve earned the right to get those calls by winning championships.”
The Lakers’ ineptitude from 3-point range is among their biggest problems. After a franchise-record 0-for-11 performance in Portland one night earlier, the Lakers missed their first six 3-pointers against the Warriors, running their skid to 0 for 22, before Troy Murphy hit a 3 late in the second quarter.