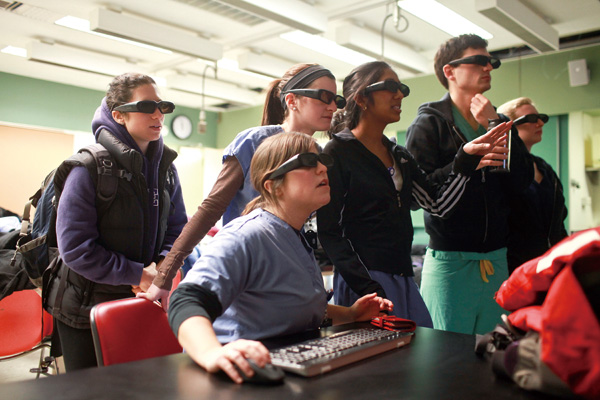 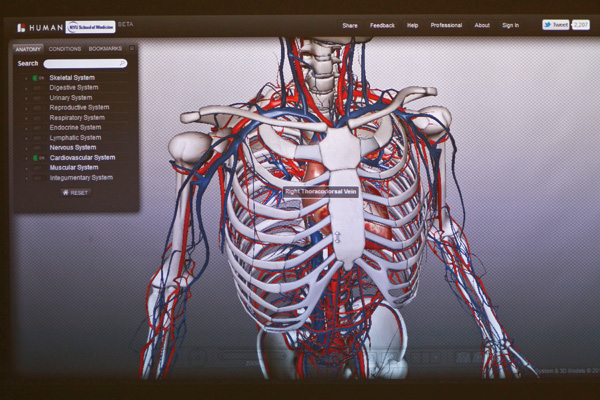 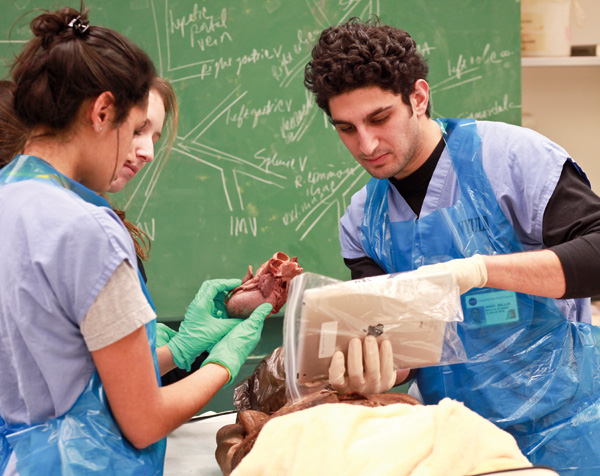 By Natasha Singer
the new york times
People wear 3-D glasses for new movies like “The Adventures of Tintin.” But for medical school?
The answer is yes at the New York University School of Medicine, which is using 3-D technology to update a rite of passage for would-be doctors: anatomy class.
In a basement lab at NYU Langone Medical Center in Manhattan last month, students in scrubs and surgical gloves hovered over cadavers on gurneys, preparing, as would-be doctors have for centuries, to separate rib cages and examine organs. But the dead are imperfect stand-ins for the living. Death – and embalming fluid – take a toll.
So, in an adjacent classroom, a group of students wearing 3-D glasses made by Nvidia, a graphics processing firm, dissected a virtual cadaver projected on a screen. Using a computer to control the stereoscopic view, they swooped through the virtual body, its sections as brightly colored as living tissue. First, the students scrutinized layers of sinewy pink muscles layered over ivory bones. Then, with the click of a mouse, they examined a close-up of the heart, watchingÂ as deep blue veins and bright red arteries made the heart pump.
Compared with the real cadavers in the lab next door, the virtual one seemed as dynamic as Imax.
“It’s like a living digital textbook,” said John J. Qualter, a research assistant professor of educational informatics at the medical school who helped design the 3-D installation.
The virtual human body is the creation of BioDigital Systems, a medical visualization firm in New York that Qualter helped to found. It develops animations of the anatomy for drug makers like Novartis, medical device makers like Medtronic, television shows like “Mystery Diagnosis” and medical schools.
The virtual body, introduced last month at NYU, represents an unusual collaboration between industry and academia. The companies, which originally paid BioDigital to develop medical animations of certain body parts for commercial purposes, agreed to let the design firm freely use the digital models for educational purposes. In recognition of NYU’s involvement, the company has pledged a small share of future revenue to the medical school.
But the medical students were merely testing an early incarnation of an ambitious project.
BioDigital plans to develop the virtual cadaver further on its new medical education website, biodigitalhuman.com, with the aim of providing a searchable, customizable map of the human body. Right now, Qualter said, the site is available only in a beta version. But in the coming months, the company plans to offer its code to, say, health websites that want to embed images of the respiratory system, or to doctors who want to show animations of prostate cancer surgery to patients.
“We wanted to use our data visualization to improve knowledge of complex health topics,” Qualter said. His firm hopes to position the virtual body as the health education equivalent of Google Maps – available as a free, easy-to-use public website and in an upgraded, fee-based professional version.
“We want to become a scalable model,” Qualter said, “a Google Earth for the human body.”
Qualter and his business partner, Frank Sculli, a software engineer, founded BioDigital Systems in 2002 to help companies and institutions use 3-D storytelling to make medical topics more comprehensible and compelling. For instance, the firm created an animated heart to demonstrate how an implant from Medtronic could fix a prolapsed heart valve. At NYU, the firm worked with the medical school to develop animations of operations for surgical education.
Those kinds of commissions helped make BioDigital successful as a small business. But its executives concluded that its growth potential would be limited if they remained focused on one-off projects for limited audiences. Last year, they decided to combine all of their commissioned medical illustrations into one virtual human.
“As a private company, as a service business, we can make a couple of million dollars annually,” Qualter said. But, as a product firm with a searchable map of the human body to market, he said, the company has greater potential to increase revenue and improve health education. “Once the BioDigital Human is really being used by a lot of people, we can leverage that.”
It is too soon to tell whether studying a digital human model will help medical students understand anatomy more deeply than they can by dissecting cadavers alone. But the virtual body certainly offers some advantages.
In the NYU lab, Chana Rich, a 21-year-old first-year student from Fairfield, Conn., dissected an older, female cadaver. But the dead woman had undergone a number of surgeries during her lifetime, and her body was now missing its appendix, spleen and right lung.
“She’s skinny and female,” Rich said, “so sometimes it’s hard to visualize the smaller vessels.”
A few minutes later, Rich was in the projection room, isolating the liver of the virtual cadaver and examining the blood vessels connected to it.
“In a cadaver, if you remove an organ, you cannot add it back in as if it were never removed,” she said as she adjusted her 3-D glasses. “Plus, this is way more fun than a textbook.”
But her colleague, Susanna Jeurling, a first-year medical student from Washington, disagreed. Dissecting a real cadaver, she said, gives students a unique, tactile understanding of the body.
“I don’t think this will ever replace cadavers,” said Jeurling, 24. “There’s something about being able to hold it and turn it in your hand.”
Administrators at the medical school say they have no plans to phase out dissection, an educational method that dates back to the Ptolemaic era. The 3-D digital human body is merely a complementary teaching method, said Dr. Marc M. Triola, associate dean for educational informatics.
“It’s an amazing blend of one of the oldest medical education techniques and the absolute newest,” Triola said.