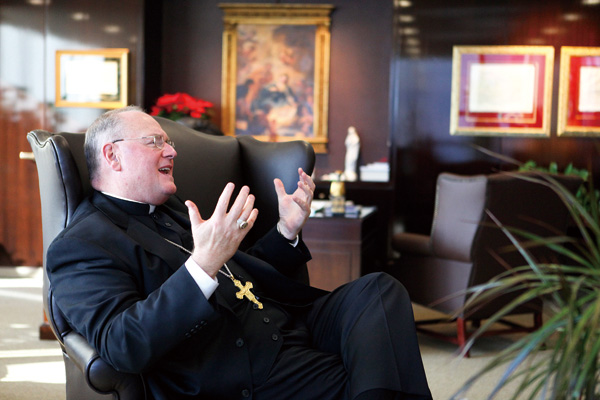 The New York Times
Pope Benedict XVI named 22 new cardinals Friday, including Archbishop Timothy M. Dolan of New York, in a set of appointments that reflected the pope’s reliance on Italians and Vatican insiders at a time when the church’s population base has shifted to the Southern Hemisphere.
The elevation of Dolan to cardinal, which will become official at a Vatican ceremony next month, is the culmination of the 61-year-old’s rapid rise through the ranks, cementing his role as a leading voice of the Roman Catholic Church in the United States and signaling the Vatican’s continuing embrace of his genial, conservative style.
Dolan is well known at the Vatican, having overseen the main North American seminary in Rome. And church scholars were struck that many of the new group of cardinals were working at the Vatican or headed Italian dioceses, reversing a trend in which Popes Paul VI and John Paul II had sought to appoint more cardinals from Latin America, Africa and Asia, continents where two-thirds of the world’s Catholics now live.
“What this means is there will continue to be this obvious disjunction between the Catholic Church on the ground and the Catholic Church at the top,” said John L. Allen Jr., an author and a correspondent for The National Catholic Reporter, a weekly newspaper.
Among the 18 new cardinals under age 80 – the age group eligible to participate in choosing the next pope – seven are Italians and only two came from dioceses in developing countries – India and Brazil (another came from Hong Kong). Although there are twice as many Catholics in Africa as in the United States, and Pope Benedict has made two trips to that continent, he named no African cardinals Friday.
“No one ever said that the Catholic Church is a one-man, one-vote operation, but it looks strange when Brazil, the biggest Catholic country in the world, has so few cardinals and Italy has so many,” said the Rev. Thomas J. Reese, senior fellow at the Woodstock Theological Center at Georgetown University, who has written extensively about the church’s leadership.

Dolan was one of two Americans named as cardinals Friday; the other was Archbishop Edwin F. O’Brien, a witty New York native who headed the Archdiocese of Baltimore before becoming the head of a Catholic lay order based in Rome that seeks to support the Christian population of Israel.

“This is a double blessing for New York,” said Monsignor Christopher Maloney, the pastor of St. John the Baptist Parish of Yonkers, who attended seminary in New York with O’Brien.

Maloney said he planned to be among the New Yorkers in Rome for the consistory Feb. 18 at which the pope will give the new cardinals the red hats that symbolize their status as princes of the church.

The elevation of Dolan came earlier than expected, in an exception to Vatican practice that underscored the Vatican’s esteem for him. Cardinal Edward M. Egan, the archbishop emeritus of New York, will not turn 80 until April, and it is unusual for a diocese to have two cardinals eligible to vote in papal elections at the same time.

“I thought probably not now,” Dolan said at a news conference Friday at St. Patrick’s Cathedral, describing his thoughts before the call he got Thursday morning informing him of his promotion. “As a kid, I just wanted to be a parish priest, and to think that now the pope has named me a cardinal – that’s awesome.”

Born in a suburb of St. Louis, Dolan began his ascension through the ranks shortly after his completion of a Ph.D. in U.S. church history. He was the secretary to the papal nuncio, the pope’s envoy, in Washington; rector of the Pontifical North American College, the Rome seminary for Americans; and auxiliary bishop of St. Louis. He was installed as archbishop of Milwaukee in 2002.

In 2009, Pope Benedict named him to lead the New York archdiocese, the church’s most prominent U.S. see, and in 2010, his fellow bishops elected him to lead the U.S. Conference of Catholic Bishops. Outgoing and warm, the archbishop quickly became known for his ability to convey his joy in the church and its teachings, rather than communicating the defensive posture of a church facing a sex abuse scandal.

He has been a faithful spokesman for the church’s conservative views, speaking out against same-sex marriage, the ordination of women, and abortion and contraception. More recently, he has been a leading voice warning about the threat to religious liberty that he and other U.S. bishops see in moves to cut off money for Catholic charitable organizations that do not offer a full range of reproductive services and equal treatment for gay men and lesbians.

But he has declined to deny holy communion to Catholic elected officials who disagree with church teachings, instead emphasizing the importance of discussion. And though he has been critical of President Barack Obama on social issues, he made a point of letting bishops know that he was encouraged by a recent Oval Office chat.

“He is a man of conciliation; he looks for conversation and dialogue,” said the Rev. Robert Barron, creator and host of a documentary series on Catholicism. “He leads with the positive first.”

Dolan has aroused the ire of some victims of sexual abuse by members of the clergy; they have complained that despite his public apologies on behalf of the church, he has done too little to assist victims in their quest for justice. Under his leadership in New York, for example, the archdiocese has continued to oppose a bill to extend the time window victims have to sue their abusers.

“He is protecting his reputation and the reputation of his colleagues instead of the emotional, physical and spiritual well-being of kids,” said David Clohessy, the executive director of the Survivors Network of Those Abused by Priests, or SNAP.

As a cardinal, Dolan’s already weighty responsibilities to the global Catholic Church will increase, meaning he will most likely spend less time in New York.

For that reason, the things he does to remind himself of his roots as a Midwestern parish priest – a time he often speaks of fondly – will probably become even more cherished rituals, including his commitment to celebrate the 7:30 a.m. Mass each weekday morning when he can.

That is where he was Friday, in ivory robes before about 100 worshipers to mark his elevation and the Feast of the Epiphany. He lifted his eyes to the sky in gratitude as he said a prayer that rang with extra meaning, “All glory and honor is yours forever and ever.”

It was a Mass of special fervor, he said from the altar, “as I thank God for the new call to service.”