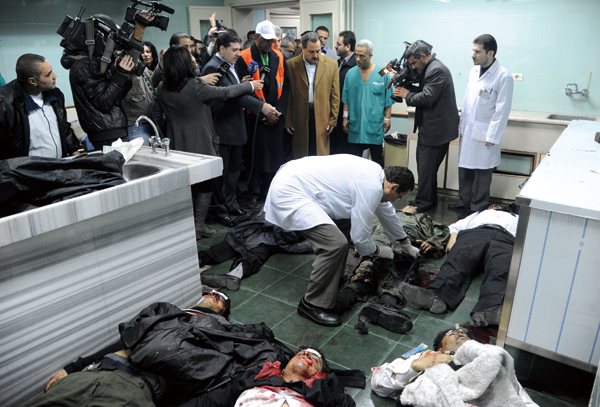 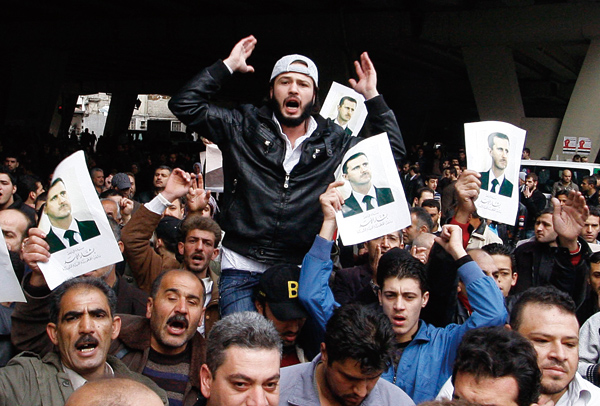 An explosion ripped through a busy intersection in the Syrian capital Friday, hitting a police bus and killing as many as 26 people and possibly many more in an attack that marked the second deadly attack in the capital in as many weeks.

A bomb rocked the Syrian capital Friday, killing as many as 26 people, injuring dozens more and leaving pools of blood, shards of glass and body parts in the streets, state media reported.
It was the second major attack in Damascus in as many weeks, marking the latest grim twist in a conflict that the United Nations says has left more than 5,000 people dead since March.
Terming it “a new escalation of terrorism” on the part of government opponents, the Interior Ministry vowed to strike back “with an iron fist.”
Opponents of President Bashar Assad accused the government itself of staging the bombings to sully the reputation of protesters who have been staging mostly peaceful demonstrations, which they say have been met with gunfire, arrests, beatings and torture.
The latest attacks came two days before an Arab League ministerial committee is scheduled to review the preliminary findings of an observer mission sent to Syria to monitor government compliance with regional demands to end the crackdown.
Opposition supporters have expressed mounting frustration with the mission, which they charge has done little but provide a cover for more violence. Activists said security forces killed as many 35 people Friday, the start of the weekend in Syria and a day of major protests as Muslim worshippers spill out of mosques after midday prayers.
The Syrian National Council, the country’s most prominent opposition bloc, urged the league to seek the assistance of the United Nations Security Council, saying Friday’s bombing “clearly bear(s) the regime’s fingerprints.” The 22-member-regional bloc has threatened to go to the security council if the government does not fulfill its obligations under a league-negotiated peace plan to withdraw security forces from residential areas, release political prisoners and negotiate with its opponents.
Syrian officials counter that bombings prove they are up against armed terrorists. Interior Minister Mohammed Shaar blamed a suicide bomber, who he said targeted an intersection in the central Midan neighborhood full of shops, pedestrians and cars with the aim of killing as many people as possible.
The official Syrian Arab News Agency said at least 11 bodies were recovered along with the unidentified remains of as many as 15 other people. At least 63, including police and civilians, were injured, SANA said.
State television aired footage of a police bus with blood and shattered glass on the seats. Furious residents held up pieces of flesh to the camera.
“That’s the freedom they want? What type of freedom is this?” one man yelled.
Damascus has been relatively sheltered from the unrest sweeping through large parts of the country. But the city has been on edge since a Dec. 23 attack in which authorities said two suicide car bombers targeting security agencies in Damascus killed 44 people and injured 166. Authorities were quick to lay the blame for that attack on al-Qaida but did not immediately finger a specific suspect on Friday.
Midan is one of the few neighborhoods in central Damascus that has seen regular anti-government protests. Amjad, a local resident too afraid to have his full name published, said the explosion took place near a police station in an area where security forces and militiamen gather before breaking up demonstrations.
He said he and a friend were headed to a nearby mosque when they heard the blast and rushed to the scene.
“There were bodies in the area and blood everywhere,” he said. “It’s so hard.”
Amjad blamed the attack on the government, which he accused of trying to divert the attention of the observers from the ongoing crackdown. He noted that the Dec. 23 bombings also took place on a Friday, which often see the week’s largest demonstrations and the highest death tolls.
Teams from the Arab League have visited the sites of both attacks.
What began as a mostly peaceful uprising against Assad has turned more violent in recent months, as a growing number of military defectors and other opposition supporters have taken up arms against the security forces.
Defectors fighting under the banner of the Free Syrian Army have claimed responsibility for deadly attacks against security installations and convoys. But a spokesman for the group denied any involvement in Friday’s explosion.

“We strongly condemn the attack,” said Maj. Maher Nuaimi, who was reached in Turkey. “It represents state terrorism from Bashar al-Assad and his gang.”

Most foreign journalists are barred from reporting in Syria and local reporters are heavily restricted, making it virtually impossible to verify the claims of either side.

“I don’t doubt that the government might place a bomb just to send a message, but it would probably do it in a place that at least does not kill its own security people,” said Rami Khouri, who heads the Issam Fares Institute of Public Policy and International Affairs at the American University of Beirut. “The tragic thing is that you can probably pick three or four possible candidates as perpetrators and all three or four of them would be credible. It’s a pretty grim symbol of the situation that Syria is in.”