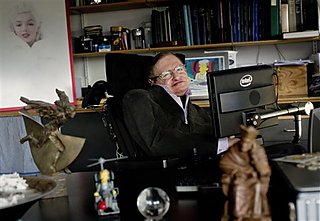 Renowned physicist Stephen Hawking was too ill to attend a conference in honor of his 70th birthday Sunday, but in a recorded message played to attendees he repeated his call for humans to colonize other worlds.

University of Cambridge Vice Chancellor Leszek Borysiewicz told the conference that Hawking, who is almost completely paralyzed because of Lou Gehrig's disease, had only recently been discharged from the hospital for an unspecified ailment.

"Unfortunately his recovery has not been fast enough for him to be able to be here," Borysiewicz said.

In his recorded speech, Hawking pleaded for interplanetary travel, arguing that humans faced a grim future unless they spread out from their terrestrial home. "I don't think we will survive another thousand years without escaping beyond our fragile planet," he said.

Colleagues including Nobel Prize winner Saul Perlmutter and renowned astronomer Martin Rees hailed Hawking as one of the most important physicists since Albert Einstein.

Borysiewicz said Hawking had "transformed our understanding of space and time, black holes, and the origins of the universe," adding that he hoped that the scientist was watching the proceedings online.

"If you're listening Stephen, happy birthday from all of us here today," Borysiewicz said to a round of applause.

A black hole expert, Hawking is one of the leading lights in theoretical astrophysics. His achievements are all the more remarkable because of his Lou Gehrig's disease, an incurable degenerative disorder with which he was diagnosed as a 21-year-old. Most people die within a few years of the diagnosis, but Hawking has defied the odds and spent half a century carrying out pioneering research.

He owes much of his fame to his best-selling series of works popularizing the latest developments in theoretical astrophysics. "A Brief History of Time," published in 1988, has alone has sold millions of copies. A host of other books, including "A Briefer History of Time," have followed.

Nevertheless the condition — known as motor neurone disease in the U.K — has made life difficult. Since catching pneumonia in 1985, he has needed around-the-clock care.

Hawking relies on a computerized wheelchair to move around and a voice synthesizer to speak. His fragile health has forced him to cancel appearances in the past.

Borysiewicz didn't say when Hawking was hospitalized or specify the nature of his condition, but he did say that Hawking would be well enough to meet some of the attendees over the next week.

Despite his absence Sunday, Hawking's celebrity status was evident at Lady Mitchell Hall, where hundreds crowded into the auditorium to hear prominent researchers outline the latest developments in cosmology.

Outside the venue, three teenagers — self-described "groupies" — waited in hope of catching a glimpse of the eminent scientist.

Eighteen-year-old engineering student Marianna Sykopetritou said that seeing Hawking would be "a once-in-a-lifetime" experience. She said that the event had a page-and-a-half-long waiting list.

In his recorded message, Hawking said explaining the universe to the wider public was a duty, and that the issue had far more than just theoretical interest.

"If you understand how the universe operates," he said, "you control it in a way."