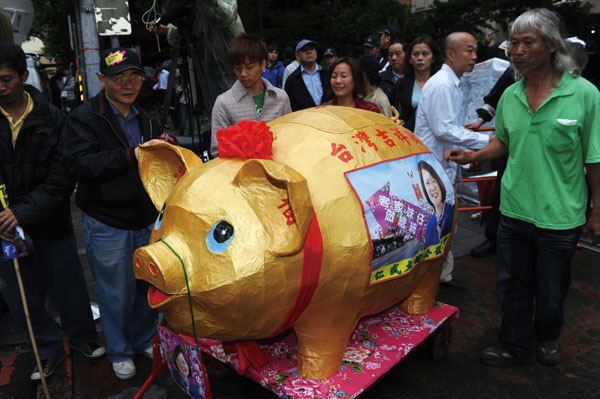 staff writer
The opposition Democratic Progressive Party (DPP) said Friday that its “three little pigs” campaign raised over NT$200 million in donations and it would use the money to defeat the ruling Kuomintang (KMT), which it described as “a big bad wolf.”
DPP spokesman Lin Chun-hsien said 143,000 piggy banks had been returned to the party with a total of NT$201 million in cash donated to the DPP and Tsai Ing-wen, its chairwoman and presidential candidate in the Jan. 14 presidential election.
Cheng Li-chun, Tsai’s campaign spokeswoman, called the fundraising campaign” the most touching small donation drive in the history of democracy.”
Lin said the funds came from ordinary individuals who helped form a great power to combat social injustice, which Cheng said was caused by “the big bad wolf” that stands by conglomerates, owns numerous party assets and employs state apparatus to help election campaign.
Cheng was referring to Tsai’s major rival, the incumbent President Ma Ying-jeou of the KMT, who is running for re-election.
In a separate event in southern Taiwan’s Chiayi, Tsai’s running mate Su Jia-chyuan touted his achievement of raising pensions for elderly farmers by NT$2,000 and helping local farmers register a record average annual income of NT$940,000 during his term as agricultural minister from 2006-2008.
Meanwhile, another DPP spokesman Chen Chi-mai rebutted a local media report that said Tsai would raise the idea of forming a coalition government during the final televised platform presentation for presidential candidates to be held Friday evening.
He said Tsai would instead outline her vision for the nation and talk about issues including cross-Taiwan Strait relations, social justice and Taiwan’s political stability.
DPP legislators Ker Chien-ming and Tsai Huang-liang, however, voiced their support for a coalition government if Tsai was elected as president. They said they believed cooperation with other parties could prevent a KMT-dominated Legislature and make running the government smoother.
In response to the media report, KMT Legislator Tsai Cheng-yuan criticized the idea of a coalition government as being simply an election tactic.
Also on Friday, in New Taipei, Tsai urged the public to view jailed former President Chen Shui-bian’s familial obligation to pay his last respects to his late mother-in-law from a humane angle instead of as a political issue.
Chen, currently serving a sentence of 17.5 years in the Taipei Prison for taking bribes and money laundering during his presidency from 2000-2008, was granted a special release to attend a mourning ceremony on Friday in Tainan. He was escorted back to the prison later the same day.
Tsai is in a three-way race against Ma and James Soong, the presidential candidate of the People First Party.