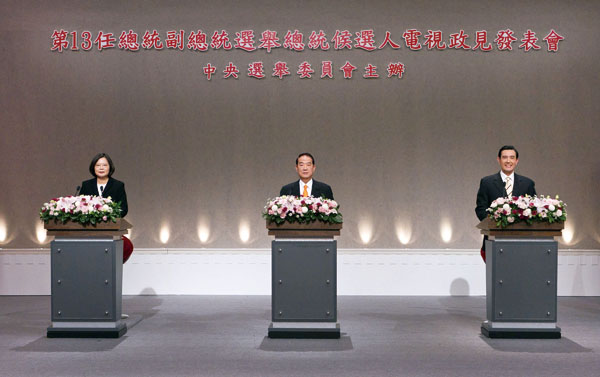 Tsai touted her ability to lead the country in the “right direction” and questioned President Ma’s ability to govern the country,while Ma touted his achievements during his first term, saying that his policies could foster a more just and equitable society.

Taiwan’s three presidential candidates focused on people’s livelihoods in their third and final live televised policy forum Friday, with the two opposition party leaders arguing that the majority of Taiwanese were not satisfied with the status quo.
President Ma Ying-jeou of the ruling Kuomintang (KMT) touted his achievements during his first term, saying that his current and future policies could build a more open environment and foster a more just and equitable society.
Tsai Ing-wen of the main opposition Democratic Progressive Party (DPP) and James Soong of the People First Party (PFP), on the other hand, questioned Ma’s ability to govern the country, saying the widening wealth gap, inflation and low salaries had left people disappointed with Ma’s administration.
Tsai urged people to ask themselves, “have you lived well in the past four years?” and touted her ability to lead the country in the “right direction.”
Soong, a veteran politician who ran for president as an independent in 2000 after splitting with the KMT, lauded his past experience and promised to take good care of those earning low to middle incomes.
Ma, who is seeking re-election, said he would start to apply the Gross National Happiness Index in 2013 in an effort to provide a gauge of quality of life as other developed countries do.
“We will focus more on happiness instead of better infrastructure and high income,” he said.
Unlike in the previous two policy forums, Ma resorted more to emotional stories and less to statistics to show that he understood the expectations people had of him, while his two rivals used similar stories to go after Ma for not being able to improve people’s lives.
Other than focusing on social issues, Tsai pledged during the end of her presentation that if elected, the DPP would not adopt the philosophy of “winner takes it all.”
She pledged to form a coalition government, base her major policies on a majority consensus and have regular dialogue with other political party leaders.
Soong said that although Ma has repeatedly highlighted his thriftiness, Ma’s campaign office and the KMT caucus have spent nearly NT$200 million (US$6.62 million) on TV commercials in “only seven days” in late December, while the DPP had spent NT$75.6 million on TV commercials.
Ma did not respond to the allegation during his presentation, while Tsai denied it.
On Taiwan-China relations, Ma said Tsai’s policies were likely to bring uncertainty to Taiwan.
“Tsai should not play Russian roulette in risking Taiwan’s fate,” he said, adding that only the “1992 consensus” between Taiwan and China was in the best interests of both sides.
The consensus refers to what Ma’s administration believes is a tacit cross-strait understanding that there is only “one China,” with each side free to interpret the meaning of the phrase.
Tsai, however, denies that the consensus exists.
Ma also denied accusations that his government overly leaned toward China, citing the example that Chinese visitors account for around 30 percent of annual tourist arrivals to Taiwan.
In response to Ma’s criticism of her proposed cross-Taiwan Strait approach, Tsai said that when the DPP was in power, the DPP adopted a rather “practical” China policy and laid the foundation for a wider realization of direct flights between Taiwan and China.
Meanwhile, Tsai said her party’s insistence on small donations to fund her campaign was to ensure that her party “will not be bound by large corporations” after it assumes power.
She accused Ma of squandering people’s money over the past three years and turning a blind eye to those who have “complicated” business interests when dealing with China.
Tsai accused Ma of abusing the national apparatus and government resources to mobilize support for his campaign, but Ma squarely denied the charges.
Tsai also said many big corporations publicly expressed support for Ma’s re-election due to pressure from China and Ma’s administration, but Ma asked Tsai not to smear these conglomerates, saying that “many small to medium-sized companies are sustained by them.”