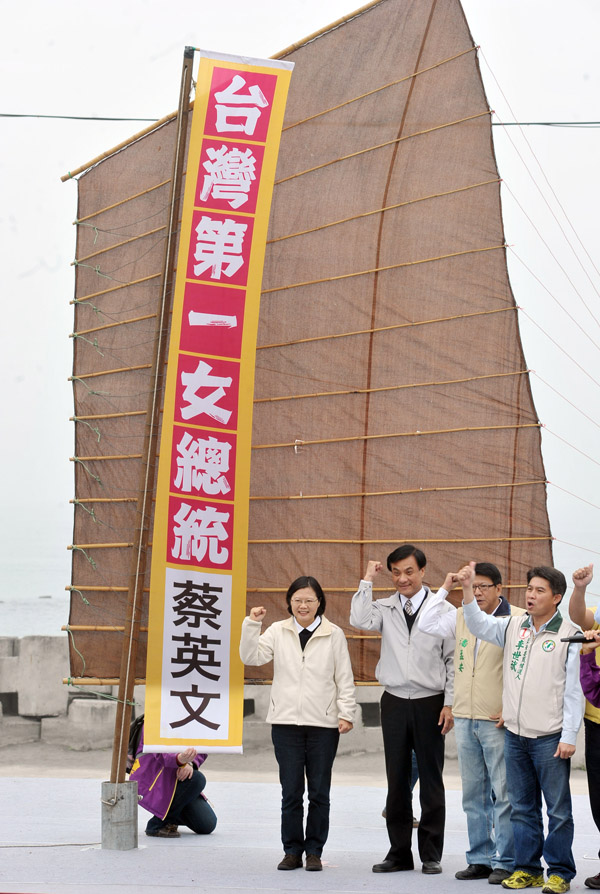 Staff writer
Tsai Ing-wen and Su Jia-chyuan, who are running on opposition Democratic Progressive Party (DPP) presidential ticket, set off Saturday on a one-week campaign tour that will take them around the island on two separate routes in the final push before the Jan. 14 election.
The tour was launched in Pingtung in southern Taiwan, with Tsai’s route planned for along the island’s west coast, while her running mate will take the east coast. The tours will converge in Taipei City on the eve of the election.
At a rally to launch the tour, Tsai said she was confident of winning the election and reiterated that she would assemble a “united government” to stabilize the political situation in the country.
She said she and Su want to change the face of politics in the country and launch a new era of a unified Taiwan that will be free of internal conflicts.
Tsai and Su boarded their campaign buses at Jhenhai Temple in Pingtung in Tsai’s hometown. The one-week tour will take them northward to cities and counties along the island’s coastlines, with Tsai’s first stop scheduled for Tainan City on Sunday.
However, Tsai will break from the tour Sunday to attend four major campaign rallies in Taichung, Changhua, New Taipei and Taipei. The rally in Taipei, to be held in front of the DPP headquarters, is expected to attract more than 100,000 people, the DPP said.
Tsai will resume the round-the-island tour Monday with a stop in Nantou County.