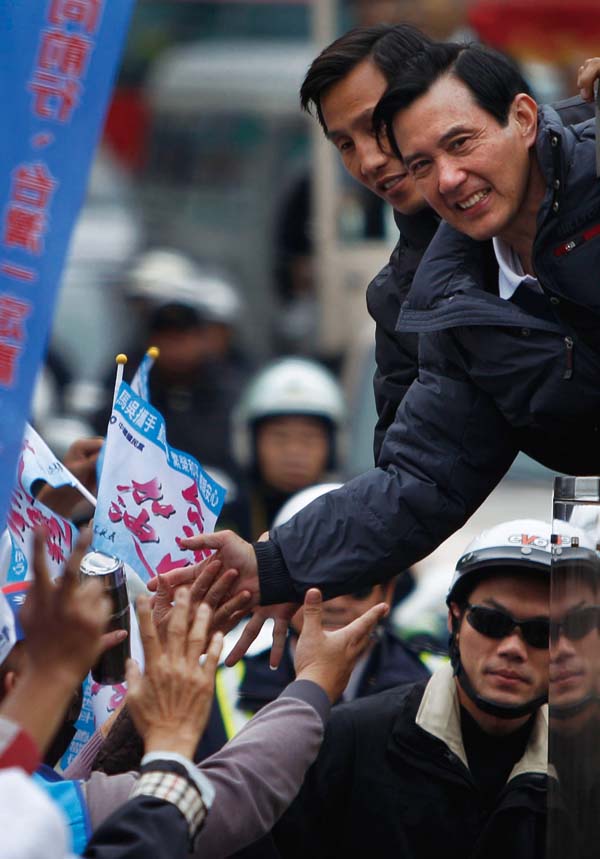 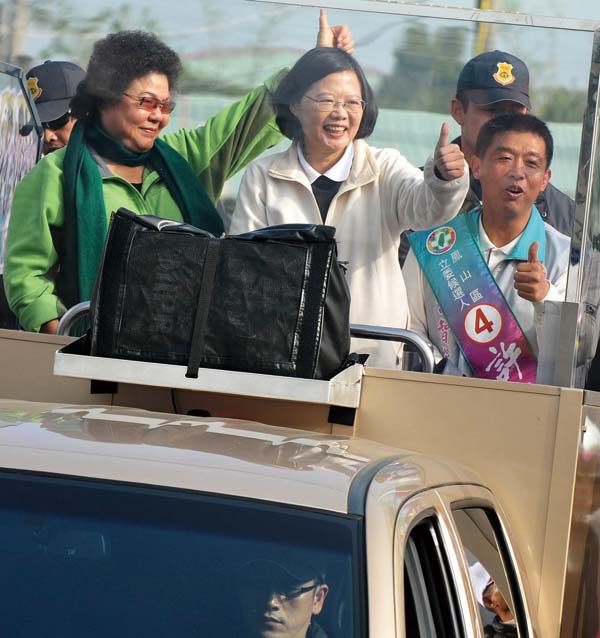 The article noted that Ma, 61, has forged a slew of reciprocal commercial agreements with China since assuming the presidency in 2008,
while Tsai, 55, is willing to do business with China, but on Taiwan’s terms.

Both President Ma Ying-jeou of the Kuomintang (KMT) and his chief rival, Democratic Progressive Party Chairwoman Tsai Ing-wen, in the Jan. 14 presidential election, cannot resolve Taiwan’s problem regarding unification or independence, but they do the island proud, an article in Time magazine said Friday.
The article, titled “Neither Independence nor Unification,” was written by Zoher Abdoolcarim, Time’s Asia editor, who interviewed the presidential candidates recently.
The article noted that Ma, 61, has forged a slew of reciprocal commercial agreements with China since assuming the presidency in 2008. Moreover, the article stated, academic and cultural exchanges have also become common and thousands of Chinese tourists visit Taiwan daily.
“Relations today between Taipei and Beijing are the coziest since 1949,” it said, referring to the year when the KMT government lost to the Chinese Communist Party in China’s civil war and retreated to Taiwan.
Ma, Beijing and Washington all want to maintain the current peace, the article said, adding that Ma believes that in a globalized world, no economy can be an island.
Engagement with China “carries risk,” Ma told Time magazine, but “it’s in Taiwan’s interest.”
The article says Tsai, 55, is willing to do business with China, but on Taiwan’s terms. According to Abdoolcarim, Tsai thinks Ma has given too much to Taiwan’s authoritarian neighbor.
“We (should) treat China as a normal trading and economic partner. A lot of people are concerned that we are moving so close and so quickly to China that we would at some point pass the point of no return, meaning the only option is to be with China in the future rather than being on our own,” the article quoted Tsai as saying.
Tsai’s remarks sound perfectly reasonable. However, because the DPP advocates de jure independence for Taiwan, many interested parties -- most notably Beijing and Washington -- worry about a Tsai victory and the possibility of returning to the cross-strait cold war witnessed during the DPP’s eight years in office before Ma’s election in 2008, the article said.
It’s clear that both China and the U.S. prefer Ma over Tsai -- Beijing because it sees him as friendlier and Washington because it doesn’t want to be caught in the middle of any new quarrel between Taiwan and China if Tsai wins.
The article pointed out that China and the U.S. don’t have a vote, and it also said that neither Ma nor Tsai can impose their wills on Taiwan. The island’s electorate will decide.
Under Ma, Taiwan has been politically stable and its economy resilient amid the economic downtown in the West. Yet polls have Tsai right on Ma’s heels if margins of error are taken into account, suggesting that her stances resonant with a substantial number of voters.
Whoever they choose will determine the course of cross-strait relations for the next four years. Beijing has to understand and accept that it must deal not just with one or two political figures in Taiwan, but also with the values and aspirations of the country’s 23 million people, the article said.
There’s a growing realization in Taiwan that “both unification and independence are impossible dreams, so much so that you don’t hear those words mentioned in Taiwan anywhere as often as before,” the article stated.
“Neither Ma nor Tsai can resolve the island’s existential problem. In fact, they reinforce it. Still, they do Taiwan proud,” the article said.
Both Ma and Tsai are informed, confident, articulate, educated, well-traveled, passionate about making a difference and genuinely concerned about the future of their land -- traits any electorate would want in its leaders.
“Too bad one of them has to lose. However, whatever happens, as the freest place in the Chinese world, Taiwan wins,” the article concluded.