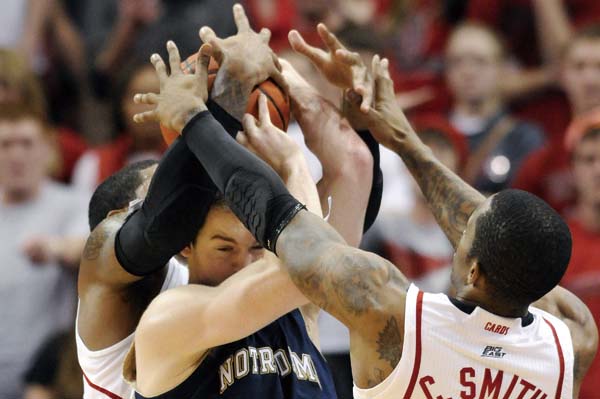 Mike Brey is impressed with the progress his Notre Dame team is making.
Eric Atkins scored six points in the second overtime Saturday, propelling Notre Dame to a 67-65 victory over No. 11 Louisville.
“I think we saw a young team maybe grow up before our very eyes today,” the Notre Dame coach said.
Notre Dame (10-6, 2-1 Big East) notched its first road win of the season and held the Cardinals without a field goal in the second overtime until Rakeem Buckles’ tip in at the buzzer.
Although Notre Dame has a 28-game winning streak at home in South Bend, Ind., they’d lost all six games played on the road or at neutral sites entering Saturday.
Atkins hit jumpers on back-to-back possessions to give Notre Dame a 65-63 lead with 17 seconds to play, and after Louisville’s Peyton Siva missed on the other end, he sealed the win with two free throws.
“You can’t say enough about Eric,” said Notre Dame guard Scott Martin. “He did a great job taking their pressure off pretty much by himself most of the time. Eric had a phenomenal game, and we’re proud of him.”
Jack Cooley led the Irish with 18 points and 10 rebounds, Jerian Grant scored 17 points, and Atkins finished with 15 points. Martin also chipped in a double-double with 11 points and 12 rebounds.
“We haven’t really been in the situation before,” said Atkins, who also had 8 rebounds. “This is our first big win away from home, and I think we can just take away our confidence.”
Kyle Kuric and Chane Behanan each scored 17 points to pace Louisville (13-3, 1-2), providing almost all of the Cardinals’ offense in the second overtime making a combined 5 of 6 free throws. Gorgui Dieng had 11 points and seven rebounds but fouled out with 2:01 left in the first extra session.
After finishing regulation tied 50-50, the teams went to overtime for the seventh time in their last 11 meetings.
The loss was Louisville’s second in a row at home and third in its last four games.
“To lose two home games in the Big East with the type of schedule we have is very destructive to say the least,” Louisville coach Rick Pitino said.
Both teams had a chance to end it after 45 minutes. Kuric, who played the entire game, was fouled on a 3-pointer and connected on two of the free throws give Louisville a 58-57 lead. But Atkins ran end to end with 10 seconds left and was also fouled. He made 1 of 2 free throws and sent the game into its second overtime at 58-58.
“After the first overtime, I remember saying to myself that I would not be surprised if this went into another one,” Atkins said.
Notre Dame committed just 11 turnovers in 50 minutes, overcoming 31.7 percent shooting for the game.
The Irish, who trailed by seven points with five minutes to go in regulation, tied the score at 50 apiece on Atkins’ 3-pointer with 26.3 seconds left. Siva was called for a charge on Louisville’s next possession, and Notre Dame couldn’t capitalize with four seconds on the clock.
The Irish trailed most of regulation after missing 12 of its first 13 3-point attempts but held Louisville without a field goal for seven minutes early in the second half to maintain pace.
Missing from the Cardinals’ offense Saturday was Russ Smith. After averaging 20 points in his last seven games, Smith went 1 of 9 from the field and scored 3 points.