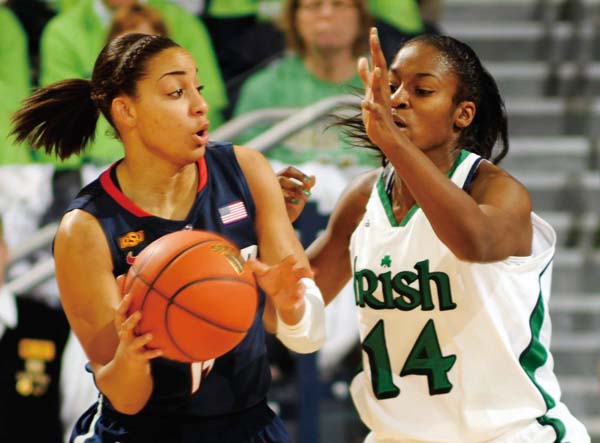 Natalie Novosel sank six free throws in overtime and Skylar Diggins scored 22 points to help No. 3 Notre Dame rally to beat second-ranked Connecticut 74-67 on Saturday.
Novosel finished with 20 points, including a 10-for-11 showing from the line for the Irish (15-1, 3-0 Big East), who won their 12th straight game.
Notre Dame snapped UConn’s 57-game conference winning streak. The Huskies last lost in the Big East to Rutgers in 2008.
UConn (12-2, 2-1) , which had beaten Notre Dame 12 straight times before losing to the Irish in the national semifinals last April, got 25 points from Bria Hartley. The Huskies were hurt by a season-high 27 turnovers.
Connecticut had a four-point lead and the ball with just under four minutes left in regulation but couldn’t hold off the Irish. Kayla McBride, whose shot with 19 seconds to go in regulation tied the game, also had a key basket in overtime and finished with 10 points and 12 rebounds.
Diggins shot just 7-for-19 but came up with a big steal near the end of regulation that ended in the tying basket by McBride in the frenzied game that saw 10 ties and 11 lead changes at the green-clad Purcell Pavilion. Notre Dame won despite shooting just 35.8 percent.
Hartley had a driving basket, a free throw and a 3-pointer to spark a 10-2 UConn spurt as the Huskies opened up a 47-42 lead with 13 minutes remaining. After a timeout, she caught a long pass and hit another layup and the Huskies had built their lead to seven with 11 minutes to go.
Trailing by eight, the Irish rallied again as Diggins scored five straight points and Devereaux Peters got free for a layup after a mad scramble on the floor for a loose ball. The 9-2 run cut UConn’s lead to 55-54.
After a timeout, Diggins sank a 3-pointer to complete the 12-2 run and give the Irish a two-point lead. But UConn responded and Carloline Doty hit a 3-pointer and then made an alert follow of a missed layup, giving the Huskies a 61-57 lead.
Mallory drove for a layup after a steal by Peters to narrow it to two with 1:49 remaining. After a missed shot by Doty, Novosel was fouled and made both free throws to tie the game with 1:10 Left.
Tiffany Hayes gave the lead back to the Huskies by hitting a pair from the line with 56 seconds and UConn got the ball back after a missed shot by the Irish. But Diggins made the steal and McBride’s ensuing basket tied it at 63.
UConn tried to set up for a final game-winning shot but freshman Kaleena Mosqueda-Lewis threw the ball away with four seconds to go — the Huskies’ 24th turnover.
After a timeout, the Irish got the ball to Novosel but here driving shot came up short, sending the game to overtime.
UConn’s 6-foot-5 Stefanie Dolson worked inside for a basket and Hartley stole the ball and drove in for a layup, putting the Huskies up 26-18 with just over five minutes to go in the opening half.
Notre Dame’s inside players Peters and Natalie Achonwa both picked up two fouls and leading scorer Diggins struggled, missing five of her first seven field goal attempts
Reinserted into the game after a breather, Diggins drove for a basket — Notre Dame’s first in more than eight minutes — Novosel also went hard to the hoop for two points and then Mallory sank a 3-pointer from the top of the key. The 11-point surge gave the Irish a three-point lead.
UConn’s Hartley stemmed the Irish rally with a 3-pointer and a layup just before the buzzer to finish with 12 points and create a 31-31 tie at the half.