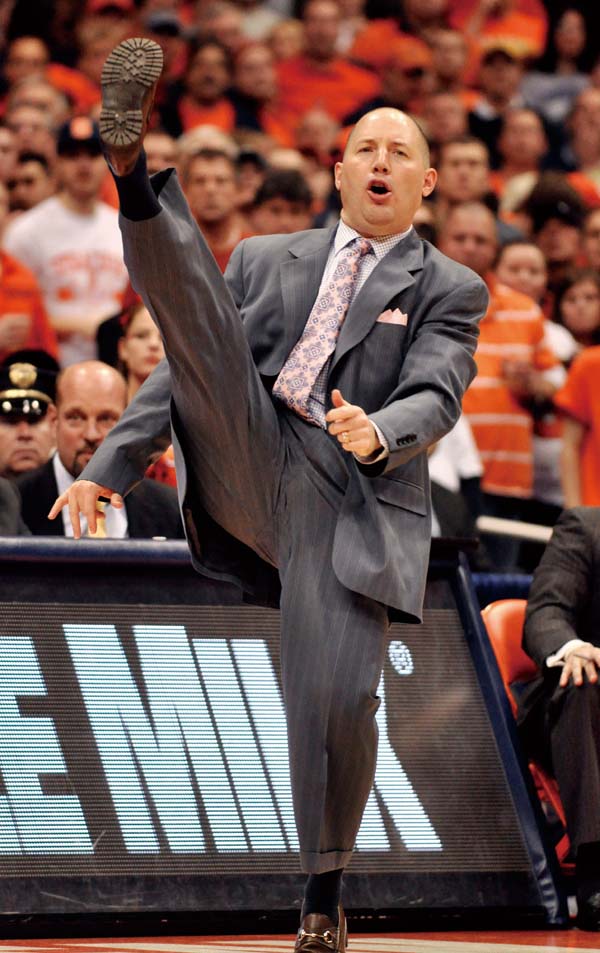 Marquette had rallied from a seemingly insurmountable deficit and was poised to put the first blemish on top-ranked Syracuse’s record. Dion Waiters wouldn’t allow it.
With the Orange clinging to a 61-57 lead with just under 5 minutes to play, Waiters blocked a 3-point attempt by Darius Johnson-Odom from the top of the key and swooped downcourt for a fast-break layup as Johnson-Odom just failed to get back in time, and Syracuse held on for a gritty 73-66 victory Saturday over the 20th-ranked Golden Eagles.
It was nice to escape after nearly blowing a 23-point first-half lead.
“It was big,” Waiters said about his 10th block of the season. “It was a momentum-changer.”
Indeed.
Waiters then fed Kris Joseph for a 3 from the right side and Scoop Jardine’s lob to Fab Melo gave the Orange a 68-60 lead with 2:13 left. Jae Crowder followed with a 3 from the left corner, but that was Marquette’s last gasp.
Joseph scored 17 points, Brandon Triche added 16, C.J. Fair had 13 points and matched Melo with eight rebounds, and Waiters added 12 points to go with seven assists and three steals.
Johnson-Odom led Marquette with 19 points, Crowder had 15, and Junior Cadougan had 10, all in the second half.
Syracuse (17-0, 4-0 Big East) is two wins away from matching the school’s best start, established a decade ago.
Marquette (12-4, 1-2) entered the game 1-7 against top-ranked teams. The Golden Eagles’ lone triumph was 83-69 over Kentucky in the 2003 NCAA tournament, which earned them a trip to the Final Four in New Orleans, where Carmelo Anthony led Syracuse to its lone national championship. The Golden Eagles lost 82-77 to Duke in November 2010 in their previous try.
After trailing badly in the first half, the Golden Eagles began the second half with a 15-5 charge, forcing six turnovers in the first 6 minutes. Melo drew a goaltending call on Crowder’s layup try with 14:36 left, allowing Marquette to pull to 42-34 as uneasiness began to creep into the season-high Carrier Dome crowd of 25,412.
Johnson-Odom swished a 3 to bring Marquette to 59-57 with 4:59 left.
“Marquette’s going to come back at you — they did driving at us,” Syracuse coach Jim Boeheim said. “But when the game got down to the line, we made a couple of big plays. When you lose a lead, particularly at home, it’s easy to start worrying about what’s happening.”
This was a retribution game for Syracuse. Marquette beat the Orange twice last season, 76-70 at home last January and the second time knocking them out of the NCAA tournament.
In both meetings last season, the Orange contested Marquette’s drives through the paint but still couldn’t stop the scoring as the Golden Eagles went over and through Syracuse’s zone defense.

This zone is much different, and Marquette found out real fast.

The Orange limited Marquette to 6-of-20 shooting in the first half, 1 of 7 from behind the arc, and held the Golden Eagles without a basket for more than 11 minutes while fashioning a 19-0 spurt.

“Any time you get whipped the way we did in the first half, you have to give credit to their staff and their team,” Marquette coach Buzz Williams said. “That’s the only way that you give yourself a chance to beat a team as talented and as well-coached as Syracuse — to play the way we did in the second half. The problem that we have is the Big East says you have to play 40-minute games.”

The rush matched one Syracuse fashioned against Tulane and the Orange also reeled off 23 straight points in a win at North Carolina State.

“We gave ourselves a chance to win the game, but on offense we didn’t capitalize on their mistakes,” Crowder said. “It was pretty tough (to overcome that deficit). Any time you’re doing that on the road, it’s tough to come back. You’re playing one of the top teams in college basketball.”

Waiters started the first-half surge by splitting the defense and feeding Fair for a baseline jumper to put Syracuse up 18-12 at 11:28.

After Johnson-Odom watched his soaring one-handed dunk attempt ricochet harmlessly away from the basket, Melo drew two charges and Jardine fed Joseph for a 3-pointer and a 21-12 lead.

Joseph hit again from the top of the key, then fed Triche for another 3 and a 31-12 edge with 3:33 left. Waiters gave Syracuse a 37-19 halftime lead with a layup with 2.3 seconds left as the shot clock expired.

Last season, the Golden Eagles hit critical 3-pointers in the closing minutes and held a big advantage at the free throw line, going a combined 43 of 56 to Syracuse’s 13 of 21.

On Saturday in the first half alone, Melo drew four charges after getting two fouls in the first 2 minutes of play and both teams ended up taking 23 free throws, with the Orange holding a 17-14 edge at the line.

Marquette, which was coming off a 73-70 loss at Georgetown on Wednesday night after squandering a 17-point second-half lead, finished 6 of 26 (23.1 percent) from behind the arc.

“Our defense in the first half was the best it’s been all year,” Boeheim said “We did a tremendous job.”