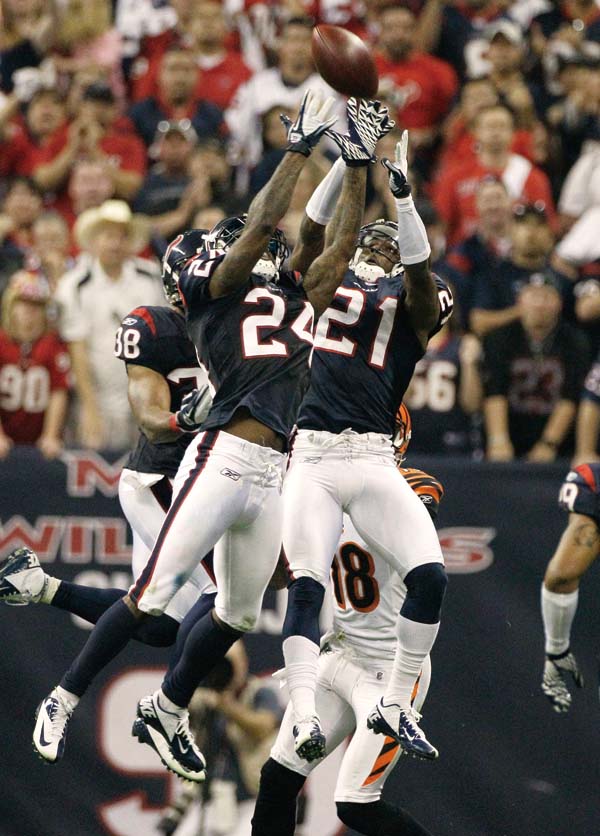 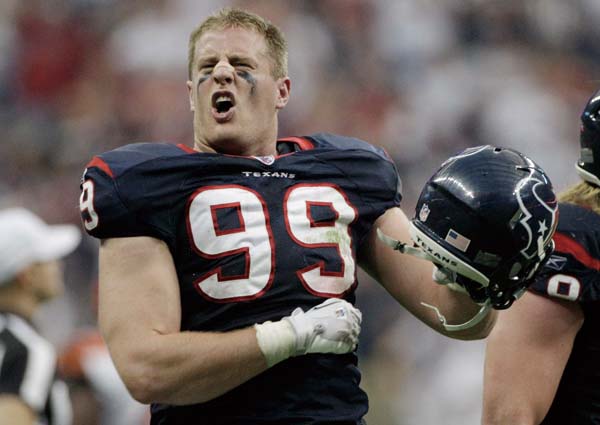 The Houston Texans turned to their kids, then to their stars to win the first playoff appearance in franchise history, a 31-10 rout of the bungling Cincinnati Bengals.
J.J. and T.J. and Andre and Arian.
Rookie J.J. Watt’s leaping interception return for a touchdown late in the first half propelled the Texans in Saturday’s AFC wild-card game.
Third-string quarterback T.J. Yates, another rookie pressed into action, threw a 40-yard touchdown pass to Andre Johnson and Arian Foster followed with his second touchdown of the game, a 42-yard run in the fourth quarter, to finish off the Bengals. (9-8).
After nine seasons of going home early, the AFC South champion Texans (11-6) are heading to AFC North winner Baltimore (12-4) next Sunday.
Watt returned the first of rookie Andy Dalton’s three interceptions 29 yards for a score that broke a 10-all tie with 52 seconds left in the half.
Yates then hit Johnson on a TD pass late in the third quarter, and Foster added his long scoring run to put away the Bengals (9-8). Foster scored on an 8-yard run in the first quarter to tie the score at 7, and finished with 153 yards on 24 carries.
Dalton was 24 of 42 for 257 yards, while Yates was 11 of 20 for 159 yards in the first playoff game in the Super Bowl era matching two rookie quarterbacks.
As the final seconds ticked away, Houston coach Gary Kubiak walked down the sideline wearing a broad smile and smacked hands with players and assistant coaches.
He embraced Johnson — the franchise’s best player — in a moment that was a decade in the making.
And two rookies helped make it happen.
Houston took Watt with the 11th overall pick in last year’s draft, a cornerstone for the reconstruction of the Texans defense. He started all 16 games and led the team with 13 tackles for loss.
But he’d never picked off a pass.
Watt saw this one coming, measuring his jump when Dalton dropped back and snatching the ball with both hands. He sprinted to the end zone as the capacity crowd exploded, and he raised both hands after reaching the end zone.
Watt became the sixth defensive linemen to return an interception for a touchdown in postseason history — excluding the Super Bowl — and the first rookie to do it.
Dalton, meanwhile, rolled his eyes and shook his head as he walked to the Cincinnati bench and watched the replay on the giant scoreboard. It was just his second interception in his last seven games.
The Bengals outplayed the Texans for most of the first half before that, holding down Houston’s offense and controlling time of possession.
Late in the third quarter, Yates got away with a pass that safety Chris Crocker simply dropped. Three plays later, Johnson broke free from cornerback Adam “Pacman” Jones and caught Yates’ pinpoint pass down the sideline to put Houston up 24-10.
As Johnson rested on the bench, Foster walked up to him and gave him a bow, the running back’s customary celebration after a touchdown. Foster has said that the bow is a Hindu gesture of respect.
Foster had a highlight of his own in the fourth quarter, dancing down the sideline for a 42-yard touchdown.