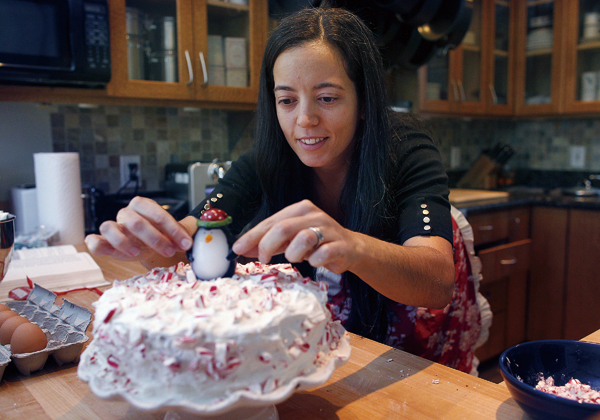 Veronica Descotte believes that all youngsters, no matter how dire their family situation, should be able to feel hopeful at least one day a year.
“Every kid should have the chance to blow out the candles on a birthday cake and make a wish,” she said. “It’s not so much the act of making the wish as it is the mind-set of doing it, the idea that no matter what’s happening with their family, they can still have a wish.”
In October, Descotte launched Cakes on Wheels, an organization focused on giving birthday cakes to families that can’t afford them. Actually, calling it an organization is a bit of a stretch. The entire staff consists of Descotte, the founder and CBO (chief baking officer); her husband, Frank Williams, who serves as the official taster — a task they both say he excels at — and their two dogs, which, between naps, provide moral support while she works in the kitchen of their Minneapolis home.
To hear Descotte tell it, nobody is happier about this than she is. It merges two of the things she likes most: baking, a skill she learned from her mother and grandmother in her native Argentina, and making people happy.
“I love it,” she said of baking as she blended a frosting of cream cheese and white chocolate. “And I believe that we all have it in ourselves to help others one way or another. Ask anyone, and they will tell you that when they helped someone, it made them feel better about themselves. It’s very addicting.”
A Minneapolis woman named Angie, who requested that her last name not be used, got one of the cakes. She said it meant the world to the teenage birthday girl to be able to blow out the candles after everyone sang “Happy Birthday.”
Although Descotte is often invited to meet the child for whom she has made a cake, she usually declines.
“I don’t want to be the one who gives the cake to the kid,” she said. “I want Mom to give the cake.”
Cakes on Wheels was born when Descotte heard a radio interview with a woman who couldn’t afford a cake for her daughter’s 17th birthday.
“She was a single mom working three jobs and raising five kids,” she said. “It was very sad, and I was thinking that if I had just known about it, I would have brought a cake over to them.”
She was driving home from a seminar and couldn’t get the thought out of her mind.
“I kept thinking: What would it take to actually do this, to get cakes for kids who don’t have one?” she said. “It was a two-hour drive, and by the time I got home, I’d figured it out.”
Cakes on Wheels is registered as a nonprofit, but she hasn’t completed all the steps necessary to have donations considered tax-deductible. A few people have given money — there’s a “donate” link on her website — but for the most part, Descotte has paid for all the ingredients out of her own pocket.
“It’s not about the tax write-off,” she said. “That’s not the motivation. Most of the people who have given me money, it’s been like $20. I don’t need much money to make a cake. It’s a small way to make a big difference in some kid’s life.”
In fact, initially she wondered if it was too small of a way.
“I asked my friends if they thought it was too trivial,” she said. “I wondered if I should focus on something more essential. But there are so many great programs in our state already doing that. I figured that kids all need a little special attention. They should be made to feel special at least one day a year.”
Descotte, 30, who came to the Twin Cities to attend Macalester College and ended up staying after she met Williams, is a biologist by training and a venture capitalist by profession. She analyzes and evaluates biotech projects that clients are considering for investments.
Her cooking philosophy is a blend of science and art. The scientist in her prompts her to not just measure ingredients, but also to weigh them. At the same time, she’s not above dabbing a finger into the frosting to test its temperature and texture.
“Please mention that I washed my hands,” she said with a laugh after being caught with her finger in the food. “Baking is a bit like science. You want consistent results, and that means that you need precise measurements. But there’s also room for you to be creative. I like to take a basic recipe and make tweaks in it.”
So far, she has done all the baking herself, “although I’ve got a list of 10 to 12 people who are willing to help me,” she said. “I’ve even heard from pastry chefs offering to help.”
She’s been able to handle the entire production so far because she’s getting requests for only a couple of cakes a week. One of her primary goals is to get the word out that the cakes are available.
“Right now, my biggest challenge is just to get people to know I exist,” she said. “I have a Web page and a Facebook page, but many of these people don’t have computers at home. My target audience is the moms who need help, not the kids.”