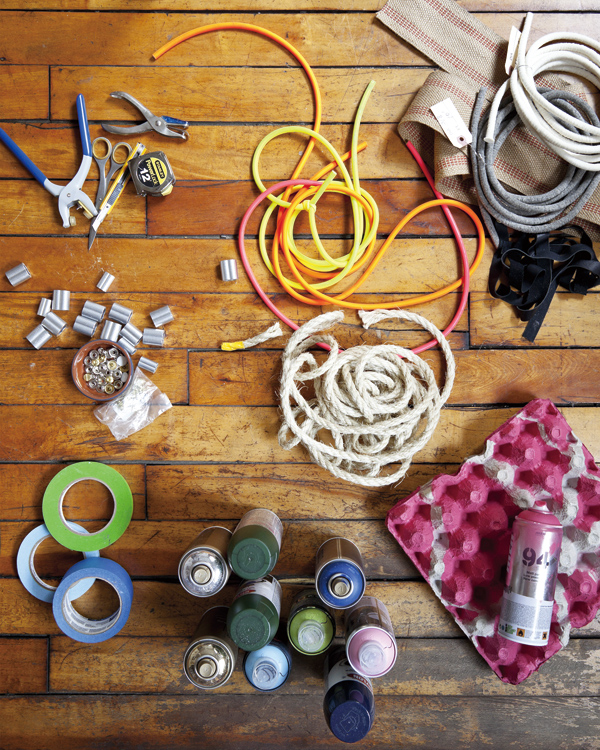 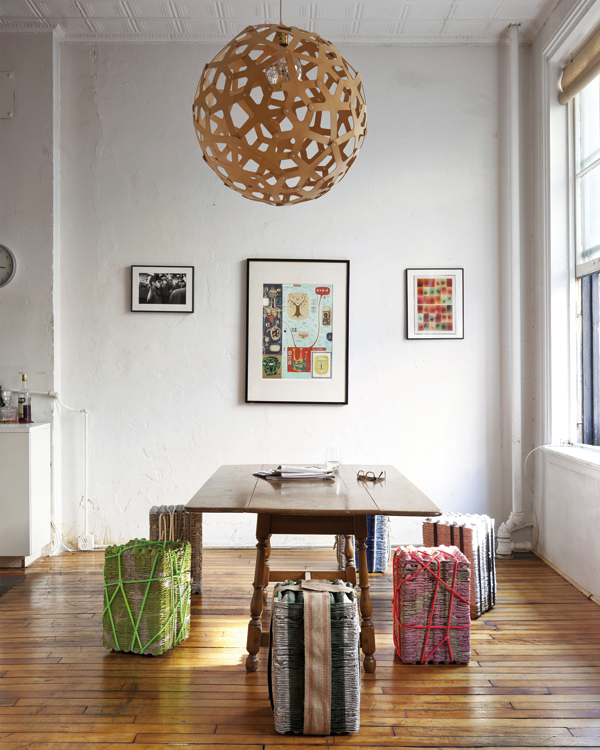 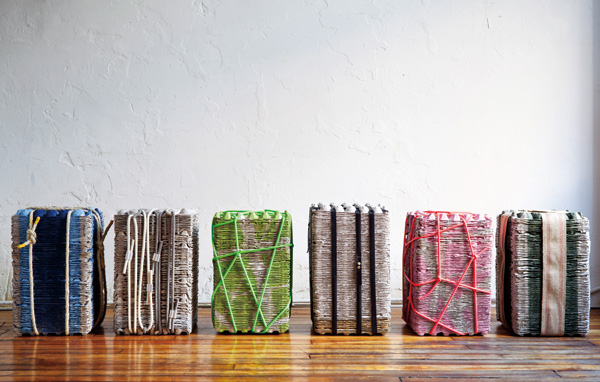 My history of trash collecting goes way back. Long before I was the director of Krrb (a kinder, friendlier, hyper-local version of Craigslist) or the editor of ReadyMade (the magazine, now defunct, that billed itself as the bible of reuse for Generations X, Y and Z), I was a skateboarding teenager in California trolling the Central Valley suburbs for building materials for ramps. Even now, living in Manhattan, I keep my eyes open for anything tossed to the curb that might be turned into something beautiful or useful.
Not long ago, I was making my way home from work in Chinatown when I saw something that made me stop short: 100 egg cartons (or egg trays, I later learned) stacked neatly on the curb outside a Chinese restaurant, in preparation for recycling.
The industrial-size cardboard trays had been used to transport 36 eggs apiece from the farm, but lying there nested together, bound with a red plastic bow, they suddenly took on the appearance of an interesting-looking bar or dining stool. Or the makings of one, anyway.
My first prototype was simple: I applied white spray paint to the trays, cutting four small squares (spray-painted black) and affixing them to the bottom as legs, and securing the stack with colorful old luggage straps to add aesthetic interest and structural integrity.
The result wasn’t bad: the cardboard had a nice amount of give when I sat on it, and the nesting trays provided plenty of support. I began to envision a set of six.
But first I needed more trays – at least 500 more. A few weeks of haunting the curbs outside Chinese restaurants, however, yielded only five. Approaching the owners of restaurants and asking them to hold their empty egg trays for me produced only 10 more. I began to wonder if I had just been lucky the first time around. Did it take months for restaurants to use that many eggs? Was another urban scavenger getting there first?
I decided to try one more time, in a more targeted way: specifically, on a Friday night – because that’s paper-recycling time in Lower Manhattan – and on East Broadway between Bowery and Houston, the center of the city’s Chinese bakeries. In less than an hour, my wife, Heather, and I collected nearly 400. The following week yielded at least 100 more, enough to begin my project.
To turn 600 egg trays into great-looking dining stools, I enlisted the help of Jen Turner, an architect and designer in Manhattan who worked with the architects Tod Williams and Billie Tsien for years, and knows how to turn raw material into something stunning. We decided to make three sets of two, to demonstrate various possibilities.
For our first set, we went with a colorful, loud 1980s style, christening the stools Madonna and Michael (although I argued for Cyndi and George). This was the simplest set. To make them dining height (17-19 inches), rather than bar stool height, we stacked 60 trays for each stool. Then we spray-painted them light green and pink, and wrapped them in Day-Glo pink-and-green rubber tubing we had picked up at Canal Rubber.
For the next set, we wanted a nautical-outdoorsy vibe. Before they were even finished, we decided to call them Scout and Skipper. The construction, again, was simple: 60 trays each, spray-painted army green and various shades of blue, and held together with burlap strips and sisal rope. The most trying part was attaching the natty snaps to Scout’s burlap straps and tying the sailing-inspired square-reef knots on Skipper.
We took a more refined approach with the final set, using felt cord from McMaster-Carr (mcmaster.com) for the straps and leaving the trays unpainted. These two we called Marcel and Eileen, after Marcel Breuer and Eileen Gray.
As projects go, this one took a certain amount of thought and experimentation – far more than my first prototype. But it was an adventure all the way around, from collecting the material to designing and building the stools. And it was reassuring to know that if we didn’t like the final product, we could neatly stack the trays, wrap a red ribbon around them and set them out for recycling. After all, one man’s trash is another man’s treasure.