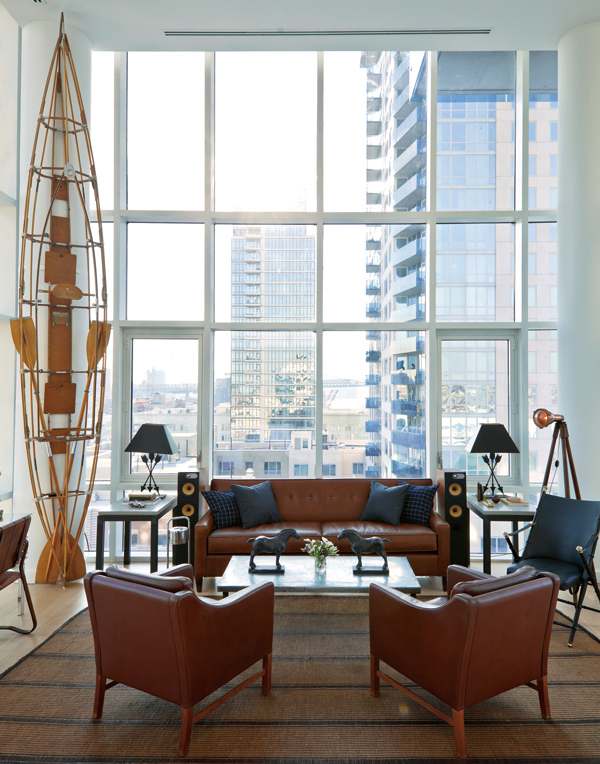 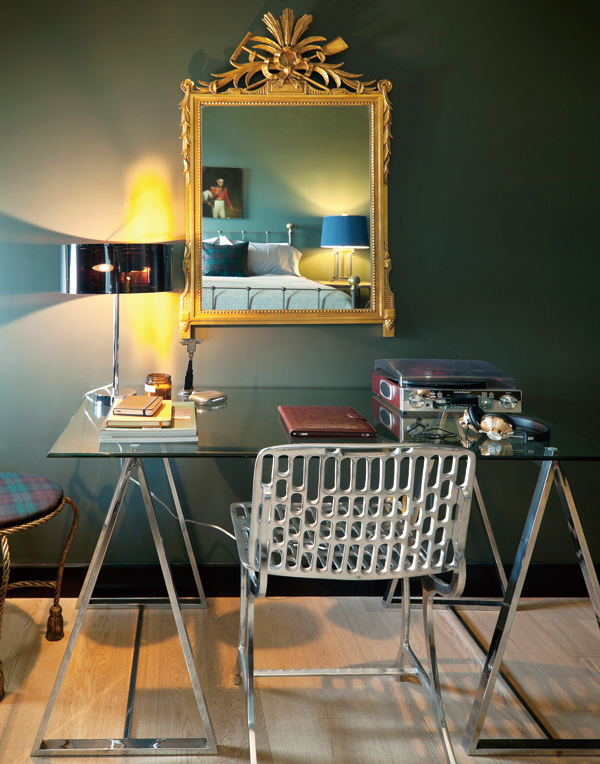 Jenkins’ decorators, the Hovey sisters, both bloggers known for their sense of style, pursued a sort of Proustian approach to home decor, filling the apartment with objects they hoped would evoke memories.

Hollister and Porter Hovey are sisters and bloggers known for their sense of style: Their loft in Brooklyn, layered with memento mori and vintage-store portraits, has attracted scores of admirers online.Still, they had never decorated anyone else’s home.
Hollister, 33, is a senior director at Lazar Partners, a health care communications firm. And until recently, Porter, 28, worked for a music industry public relations firm (she is also a photographer, and will shoot the images for a book on decor they are publishing with Rizzoli in 2013).
Though they had pondered the idea of starting an interior-design firm for years, it wasn’t until Peter Jenkins hired them to decorate his penthouse at the Edge, the glassy condo towers on the waterfront, that Hovey Design was born.
But Jenkins was willing to take a risk, and the Hoveys, with their unconventional taste, were insurance against having a generic home.
Jenkins, 57, is an executive at Booz & Co., a consulting firm, and a co-founder of the independent label Stranger Records. Most of his time is divided between homes in Dubai and Hong Kong, and he travels constantly for work, which means spending many nights in hotel rooms.
So when he purchased the nearly 2,100-square-foot penthouse in July, for $2.15 million, he wanted something “with more of me in it,” he said. “I didn’t want something that looked like the Ritz-Carlton, or the Fairmont, or the W.”
Jenkins knew Porter from Booz – she was an assistant there until this year – and when he asked her to suggest someone to decorate his new apartment, she quickly volunteered the services of the Hovey sisters.
His requests were few: no chintz, no taxidermy. And the stereo speakers had to be a certain distance apart, and about a foot away from the windows. That was non-negotiable; Jenkins is fanatical about acoustics. (As it happens, the space is great for Bach, he said, but not so good for Lana Del Rey, the rising indie chanteuse who released her first single on Stranger.)
The Hoveys pursued a sort of Proustian approach to home decor, filling the apartment with objects they hoped would evoke memories, based on information they got from a questionnaire asking him about things like his favorite toys and movies. It was a technique that struck Jenkins as “a little clunky,” he said, “but it did bring out things I was genuinely interested in.”
The result is an interior punctuated with unexpected details, such as a World War II-era radio-frequency signal generator in the master bedroom. Jenkins, who has an engineering degree from Cambridge, said that as a child he had a fascination with how things worked: “I used to love making radios.”
There is also a Klepper kayak, which the Hoveys believe dates to the 1950s, and reminds him of large balsa-wood gliders he built as a teenager.
The kayak had been packed in two duffel bags at Dickinson’s Antiques in Beacon, N.Y., where the sisters did much of their shopping, and the store’s owner wasn’t sure how big it would be once it was assembled. The answer, they found out, was 20 feet long, a skeletal structure just short enough to be fastened vertically to a column in the living room without hitting the ceiling.
Jenkins said he admired not just the Hoveys’ ability to find unusual vintage objects, but also the ways in which they used them.
The kayak is “genius,” he said. “I would have loved to have the imagination to think of that.”
As Hollister put it, “It’s kind of like a grown man’s erector set.”
Then again, it nearly ended up being suspended overhead. As Porter pointed out, “it would have been an awesome chandelier.”