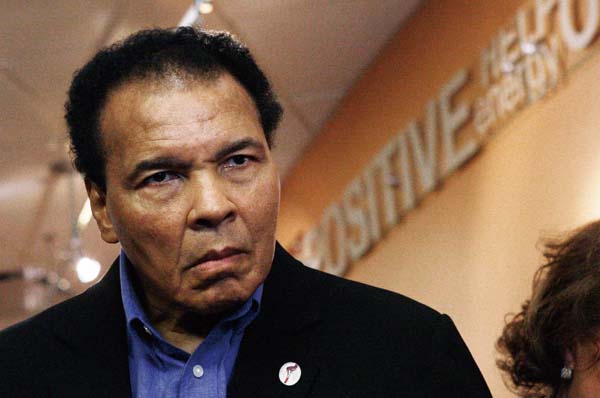 Muhammad Ali is coming home to celebrate another milestone — his 70th birthday.
The iconic heavyweight boxing champion will bask in the limelight once again at a private birthday bash on the evening of Jan. 14 at the Muhammad Ali Center in downtown Louisville. Ali turns 70 on Jan. 17. The party will double as a fundraiser for the cultural and education center that also features a museum focusing on Ali’s long career as a boxer, social activist and humanitarian.
Ali Center spokeswoman Jeanie Kahnke said Saturday that Ali will be surrounded by old friends and people who made a difference in his life, including his longtime trainer Angelo Dundee. The party will feature a dinner, entertainment and speeches.
She described it as a “retrospective look and celebration” of Ali’s life.
“It’s significant for anyone to turn 70 years old,” Kahnke said. “But for such a global icon, who has literally touched the lives of millions of people, it’s a momentous event to celebrate.”
A few tickets remained for the $1,000-per-person event, she said.
Kahnke said that Ali and his wife, Lonnie, are looking forward to returning for the celebration. The Alis have a residence in Louisville but have recently been staying at their home in Arizona, she said. Ali is battling Parkinson’s disease.
A series of community events — titled “Seven Days for Seven Decades” — will be offered from Jan. 15-21 at the center, touching on both the serious and fun sides of Ali.
The events include a “compassion fair” and workshops focusing on examples of compassion throughout the world. An exhibit will delve into the lives of people with dual African American and Native American ancestries. There will be screenings of films based on Ali’s life.
On Jan. 15, a magician will perform in the center’s main lobby — a recognition of Ali’s love of magic tricks. Also, people visiting the center during that week will receive a discounted admission for bringing non-perishable food items for a food bank.
“We really want to thank the community that has supported and loved and embraced Muhammad,” Kahnke said.
The center opened in 2005 and draws about 85,000 visitors a year.