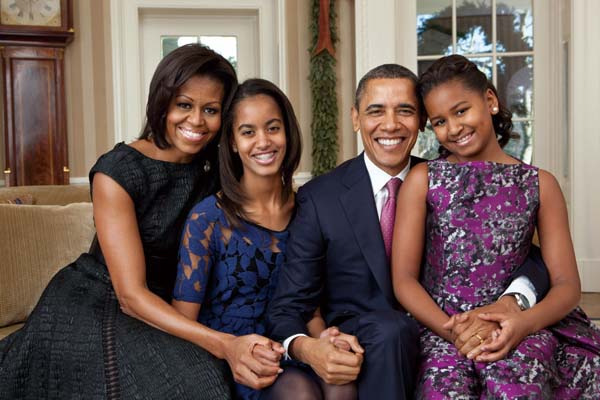 ‘The Obamas,’ to be published Tuesday, is based on interviews with 30 current and former aides, though President Barack Obama and the first lady declined to be interviewed for the book.

First lady Michelle Obama is a behind-the-scenes force in the White House whose opinions on policy and politics drew her into conflict with presidential advisers and who bristled at some of the demands and constraints of life as the president’s wife, according to a detailed account of the first couple’s relationship.
New York Times reporter Jodi Kantor, in a book to be published Tuesday, portrays a White House where tensions developed between Mrs. Obama and former White House Chief of Staff Rahm Emanuel and former press secretary and presidential adviser Robert Gibbs.
The Associated Press obtained a copy of the book, “The Obamas,” Friday evening and The Times posted a 3,300-word adaption on its website that appeared to capture its most revealing accounts. The book is based on interviews with 30 current and former aides, though President Barack Obama and the first lady declined to be interviewed for the book.
The book portrays Mrs. Obama as having gone through an evolution from struggle to fulfillment in her role at the White House but all the while an “unrecognized force” in pursuing the president’s goals.
She is seen publicly as the friendly and popular face of the softer side of the White House, the one reading to school kids or promoting exercise as a means to reduce child obesity.
According to Kantor, early in 2010 as the president’s health care agenda seemed in danger of collapsing, Mrs. Obama let it be known she was annoyed by how the White House was handling the strategy. After media reports indicated Emanuel was unhappy pursuing the health care overhaul, Emanuel offered to resign, Kantor wrote. The president declined the offer.
By that spring, however, Kantor writes that Mrs. Obama “made it clear that she thought her husband needed a new team, according to her aides.”
Among the book’s most provocative anecdotes, Kantor recounts a scene in which Gibbs, frustrated after tamping down a potential public relations crisis involving the first lady, exploded when presidential adviser Valerie Jarrett told him the first lady had concerns about the White House response to the flap. The initial commotion had been over an alleged remark by Michelle Obama to French first lady Carla Bruni-Sarkozy that living in the White House was “hell.”
Gibbs cursed the first lady, who was absent. Kantor writes that Gibbs later said his anger was misplaced and that he blamed Jarrett for creating the confrontation. Kantor writes that Jarrett appeared to have been too quick with her criticism of Gibbs and that two aides to the first lady later said Jarrett had misspoken.
The White House had a cold reaction to the book, calling it an “over-dramatization of old news” and emphasizing that the first couple did not speak to the author, who last interviewed them for a magazine piece in 2009.
“The emotions, thoughts and private moments described in the book, though often seemingly ascribed to the president and first lady, reflect little more than the author’s own thoughts,” White House spokesman Eric Schultz said. “These secondhand accounts are staples of every administration in modern political history and often exaggerated.”
The book, in an array of reconstructed anecdotes, depicts a first couple often wishing they could escape the confining White House life more freely; a president who at times gets deeply frustrated by how the press covers him; and a former chief of staff, Emanuel, who let loose with profane outbursts on staff members. All of those themes have been presented in some form in other publications.
One incident recalled that Jarrett used a phone aboard Air Force One to call a New York Times reporter. The reporter was pursuing a story about how Obama’s West Wing was essentially a big boys’ club, and Jarrett was calling to argue that the premise of a male-dominated operation was overblown. The book says even though Jarrett was the one making the call, it was Obama himself who was managing the response to the Times’ story even before it came out by “personally dictating talking points to the aides who would speak to the reporter.”

In another, the book describes how Obama, after winning a U.S. Senate seat and writing a best-selling book, “The Audacity of Hope,” sought self-protection and privacy as he came to terms with his new fame. Some staffers came up with a word to describe times when the senator couldn’t connect with people: “Barackward,” a combination of “Barack” and “awkward.”

But despite the White House pushback to the book, Kantor also includes many positive portrayals of both Obamas as committed parents and a down to earth power couple who have not lost their perspective.

Other revelations in the book:

— Mrs. Obama initially chafed at life in the White House and for a short period before the inauguration had even mulled staying in Chicago in 2009 at least until the two Obama daughters completed their school session.

— During the struggle to pass health care reform, Obama was committed to tackling the massive problem of rising health care costs despite the political costs. “Michelle and I are perfectly comfortable if we’re only here one term if we feel like we really accomplished something,” the book quotes the president as telling aides.

— Despite her reticence in 2010 to campaign during the midterm elections, the book says Mrs. Obama now has no qualms about 2012. “Michelle had been playing it safe, storing up political capital, and now she wanted to spend it all on her husband’s re-election campaign.”