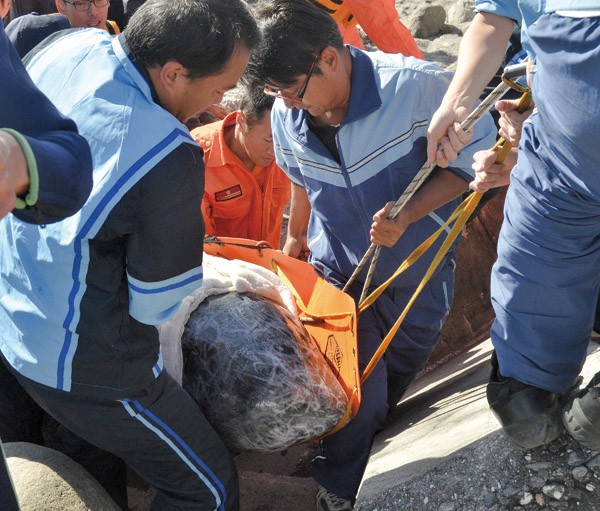 The Coast Guard Administration said that three dolphins, two of them dead, were found separately on beaches in the eastern county of Taitung this weekend.

Three dolphins, two of them dead, were found separately on beaches in the eastern county of Taitung this weekend, the Coast Guard Administration (CGA) said yesterday.
The one that was found alive by fishermen Sunday was beached at Fengli in Taitung, the CGA said.
It was 2.5 meters long, weighed about 200 kg and had apparent tear wounds near the tail but its vital signs were stable, according to the CGA.
The injured dolphin was sent to a medical center at National Cheng Kung University (NCKU) for treatment, the CGA said.
Wang Chien-ping, a marine biologist and cetacean professor at NCKU who happened to be in Taitung at the time, determined that the mammal was a Risso’s dolphin.
Meanwhile, two dolphin carcasses were found Saturday in Lanyu and Lyudao (Green Island), respectively. The one in Lanyu was partially decomposed and the one in Green Island was dismembered, the CGA said.