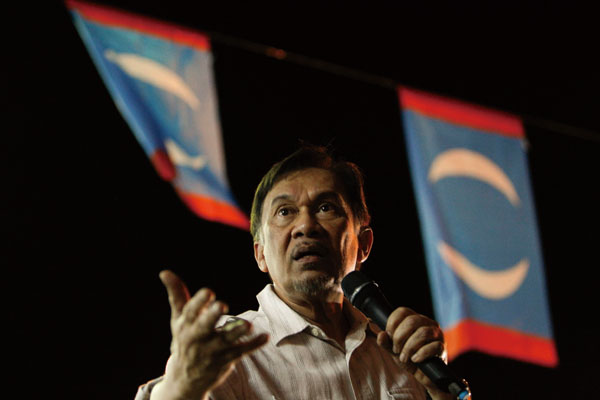 Associated Press
KUALA LUMPUR, Malaysia
Malaysian opposition leader Anwar Ibrahim said Sunday on the eve of a verdict in his sodomy trial that he is prepared to be imprisoned, but hoped that such an outcome would hurt the ruling coalition in the next national elections.
The Kuala Lumpur High Court could sentence Anwar to a maximum of 20 years if it convicts him Monday of sodomizing a young male former aide.
Anwar denies the charges. He says Prime Minister Najib Razak’s governing coalition masterminded the trial in an effort to tarnish his image and potentially banish him from politics. Najib denies any conspiracy.
“We pray for the best, that justice will prevail, but we’re prepared for the worst,” Anwar told The Associated press.
The prosecution’s case in the sodomy trial hinges mainly on testimony by Anwar’s accuser, Saiful Bukhari Azlan, and semen samples found on his body that investigators said matched Anwar’s DNA. Defense lawyers insist Saiful’s testimony contained too many inconsistencies and that the DNA evidence was mishandled and tainted.
Anwar, a 64-year-old former deputy prime minister, was convicted in another sodomy case in 2000. He denied claims that he sodomized his family’s ex-driver, and Malaysia’s highest court freed him in 2004 after quashing his conviction and nine-year sentence.
Anwar said a conviction in the current case could cause the government to face a backlash in the “court of public opinion in elections” widely expected this year.
“Notwithstanding whether I am set free or jailed, the focus should and must be the elections, and the people must decide,” he said. “Make sure you come fully prepared and change the government in the next general elections.”
Anwar has been touring various Malaysian states over the past week for rallies to address thousands of supporters, many of whom are expected to demonstrate outside the court when the verdict is announced.
Anwar was charged in 2008, several months after the National Front coalition endured its worst electoral results in more than five decades of uninterrupted rule.
The opposition now controls slightly more than one-third of Parliament’s seats. It hopes to win power amid persistent public complaints that the government has allowed corruption and racial discrimination to flourish, but the National Front has voiced confidence that its support remains strong in crucial constituencies.