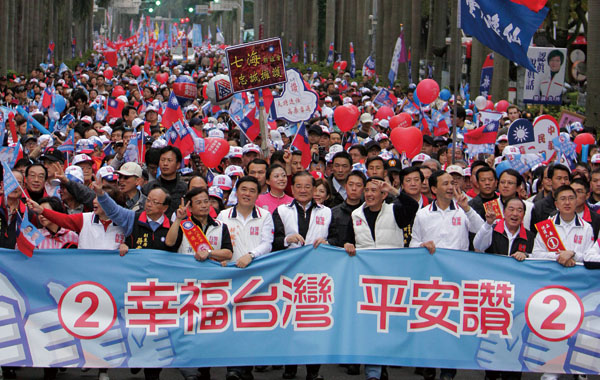 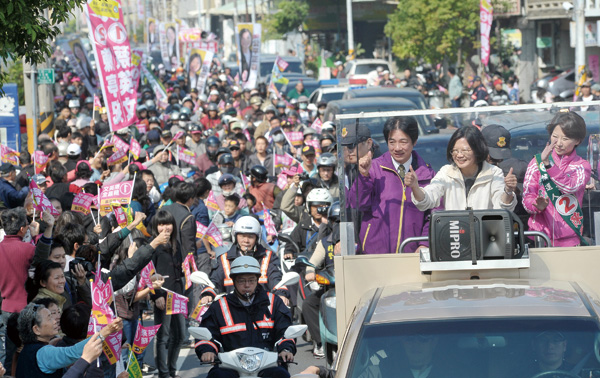 Staff Writer
The presidential candidates of Taiwan’s two major political parties stepped up their campaign yesterday with a series of “Super Sunday” rallies across the island to jockey for voter support ahead of the Jan. 14 election.
President Ma Ying-jeou of the ruling Kuomintang (KMT), who is seeking a second term, was scheduled to lead a parade in Taipei City in the afternoon over a distance of five kilometers from the city hall plaza to the Ketagalan Boulevard in front of the Presidential Office.
In the home stretch of the presidential campaign, Ma’s team is holding simultaneous carnival-like parades in Taipei, Taichung, Hualien and Taitung, six days before the presidential and legislative polls.
First lady Chow Mei-ching and Ma’s running mate Premier Wu Den-yih will lead the parade in Taichung, central Taiwan.
Ma’s campaign chief King Pu-tsung and former Health Minister Yaung Chih-liang will lead another parade in Hualian, eastern Taiwan, while Legislative Yuan Speaker Wang Jin-pyng and KMT Vice Chairman Chan Chun-po will head a fourth parade in the southeastern county of Taitung to rally supporters.
Meanwhile Ma’s main challenger Tsai Ing-wen of the Democratic Progressive Party (DPP) was also slated to appear at a major rally in Taipei on Sunday evening.
The DPP rally in Taipei, to be held in front of the party’s headquarters near the Huashan Park, is expected to attract more than 100,000 people, including DPP mayors and county chiefs and more than 100 leaders in various professional fields, according to the DPP.
Tsai and her running mate Su Jia-chyuan on Saturday launched a one-week campaign tour that will take them around the island on two separate routes in the final push before the presidential election.
However, Tsai was scheduled to break from round-the-island for the DPP’s four “Super Sunday” rallies in Taipei, New Taipei, Taichung and Changhua.
She will resume the south-to-north island tour Monday with a stop in Nantou County.
Meanwhile, James Soong and Lin Ruey-shiung, the presidential candidates of the minor People First Party, were stumping in Hualien on Sunday.
For the “Super Sunday” rallies, the National Security Bureau (NSB) has mobilized additional police and military personnel to provide security for the candidates during the campaign drives.
NSB Director-General Tsai De-sheng said all the security personnel are in place and everything will under control for “Super Sunday.”