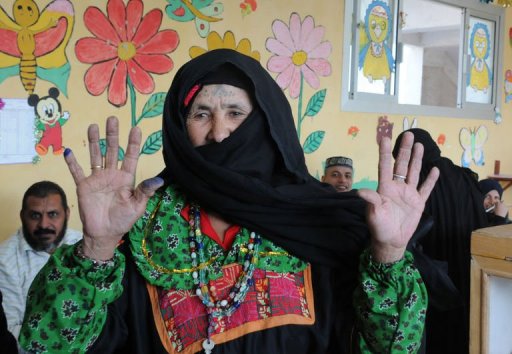 Egypt's two main Islamist parties claimed on Saturday to have together taken 62.2 percent of the vote in the final stage of a general election, maintaining their lead in the overall contest.

The Freedom and Justice Party of the powerful Muslim Brotherhood said on its website that it had garnered 35.2 percent of the party list vote in the polling in the final nine governorates on Tuesday and Wednesday.

The Al-Nur party of the even more conservative Salafists, said it received 27 percent.

The two parties chalked up 65 percent in the first two phases of Egypt's first general election since the February ouster of president Hosni Mubarak.

The elections for the lower house of parliament have divided up the country geographically.
The last stage included the unstable Sinai region, which lies along the border with Israel and the Gaza Strip and includes the country's popular Red Sea tourist resorts.

Under the complex electoral system adopted after Mubarak's ouster, second-round run-offs still have to be held later this month where necessary for the one third of seats that are decided in first-past-the-post constituencies.
From January 29, two-stage elections will then be held for the upper house.

Once the new parliament has been sworn in, a commission will be appointed to draft a new constitution before presidential elections are held by the end of June.

A once reluctant United States is reaching out to the Muslim Brotherhood in a nod to Egypt's new political reality, but concerns linger about the group's attitude toward minorities, women and the peace treaty with Israel.

Secretary of State Hillary Clinton said before the polls that the United States had pursued 'limited contacts' with the Brotherhood as Washington was 're-engaging in' a six-year-old policy in light of Egypt's political changes.

Ottaway said president George W. Bush's administration stopped talking about its Freedom Agenda of democracy promotion after candidates backed by the Brotherhood gained 20 percent of parliamentary seats in the 2005 election.

The administration, she told AFP, 'essentially bought Mubarak's line' that the Brotherhood and its links to Islamist militants were a threat to Egypt's and the region's stability, even though it had renounced violence decades ago.

The most populous Arab country, Egypt has been the lynchpin of US policy in the Middle East since 1979 when it became the first Arab state to sign a peace treaty with Israel.

"The US essentially backed Mubarak in its repression of the Muslim Brotherhood," Ottaway said. US officials also turned down invitations by her think-tank to attend post-2005 meetings with Arab Islamist groups, including Egypt's Muslim Brotherhood.

"For the US now to reach out to the Muslim Brotherhood is a big step, it's a step that's long overdue, but it's a step that the United States has resisted," she added. "It's a huge change and they're doing it out of necessity."

Analyst Nathan Brown said the Brotherhood has also 'given just enough in terms of reassuring signals to slightly raise the comfort level with them in the US' and justify contacts.