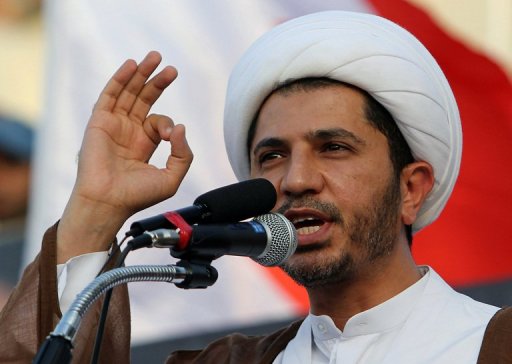 Hundreds of Bahrainis gathered on Saturday for a demonstration called by the Shiite-led opposition defying a ban by police.

Cleric Sheikh Ali Salman, who heads the main Shiite opposition formation Al-Wefaq, appeared along with leading opposition figures among the protesters, according to rights activist Yusif al-Mahafda and footage posted on social networks.

The demonstration on the service lane of a highway leading to Manama was called for by four opposition groups, led by Al-Wefaq.

Riot police blocked the roads leading to the assembly point in Tubli, southwest of the capital, forcing demonstrators to gather across the road, former MP Matar Matar told AFP.

Salman later told demonstrators to go home after fruitless negotiations with the police, saying that the "message was delivered," Matar said.

The interior ministry said in a statement on Friday that it had rejected a request by Al-Wefaq to hold the rally because it would "obstruct traffic along the main road."

Demonstrations have become commonplace in Shiite villages despite a heavy-handed crackdown that ended a month-long pro-democracy protest in mid-March.

Riot police regularly clash with demonstrators and use tear gas to disperse gatherings.

An international probe into Bahrain's crackdown on protests found that 35 people were killed in the unrest, including five security personnel and five detainees who were tortured to death in custody. Hundreds were injured.

The United States on Saturday expressed concern over fresh violence in Bahrain between police and demonstrators, and urged a probe into the most recent clashes, AFP reports.

US embassy officials in Manama meanwhile met human rights activist Nabeel Rajab, a Shiite, who was injured during a demonstration on Friday, the State Department said.

"The United States is deeply concerned by continuing incidents of violence in Bahrain between police and demonstrators," said spokeswoman Victoria Nuland in a statement.

"We urge all demonstrators to refrain from acts of violence and for police and security forces also to avoid excessive use of force."
Rajab, who heads the Bahrain Centre for Human Rights, was hospitalized after the attack that also targeted fellow activist Yosuf al-Mahafdha, their supporters said.

Bahrain is majority Shiite, but the country is ruled by a Sunni monarch and members of the royal family hold the main political and military posts.

Demonstrations have become commonplace in Shiite villages despite government action, including the use of troops from neighboring Saudi Arabia, that ended a month-long pro-democracy protest last year.