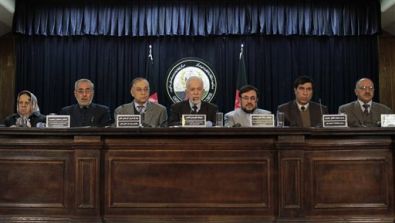 An Afghan investigative commission accused the American military Saturday of abuse at its main prison in the country, repeating President Hamid Karzai's demand that the U.S. turn over all detainees to Afghan custody and saying anyone held without evidence should be freed.

The demands put the U.S. and the Afghan governments on a collision course in an issue that will decide the fate of hundreds of suspected Taliban and al-Qaida operators captured by American forces. The head of the Afghan investigation said U.S. officials told him many of those militant suspects were taken based on intelligence that can't be used in Afghan courts.

The dispute that has unfolded in recent days recreates many of the thorny issues surrounding the controversial U.S. detention center at Guantanamo Bay. There, as at the prison in Afghanistan, American forces are holding many detainees without charging them with a specific crime or presenting evidence in a civil court.

Detainees interviewed during two visits to the U.S.-run portion of the prison outside Bagram Air Base north of Kabul complained of freezing cold, humiliating strip searches and being deprived of light, according to Gul Rahman Qazi, who led the investigation ordered by President Karzai.

Another investigator, Sayed Noorullah, said the prison must be transferred to Afghan control "as soon as possible," adding that "If there is no evidence ... they have the right to be freed."

U.S. Embassy spokesman Gavin Sundwall said Saturday that American officials only received the commission's report after its press briefing. He said all allegations of prisoner abuse are seriously investigated and repeated that the U.S. is committed to turning over all its prisons in Afghanistan "in a responsible manner."

Mr. Karzai on Thursday abruptly demanded that the U.S. military turn over full control of the prison, officially known as the Parwan Detention Center but generally referred to as the Bagram prison, within a month. A spokesman for the president said Saturday that he made the announcement in response to the investigation team's report.

The president's demand for full control of the prison took many by surprise, since the U.S. and Afghan governments had been working on a gradual timetable for transferring responsibility for the prison over the next two years.

The escalating dispute could also threaten delicate negotiations the U.S. and Afghanistan for a strategic partnership deal that could leave a small American security force after most foreign troops withdraw in 2014. The status of detainees is a key unresolved issue in the talks.

According to Mr. Qazi, U.S. officials at the prison said they have delayed turning over about 90% of the estimated 3,000 detainees held at the prison near Bagram because it fears the suspected militants are too dangerous to be released, as they likely would have to be under Afghanistan's judicial system

Officially, U.S. and Afghan militaries jointly run the facility, but the Afghan side controls a small portion with about 300 detainees whose cases are slated to be tried by Afghan judiciary. The U.S. military runs the larger portion of the prison.

Mr. Qazi, who led the ad hoc investigation of the Independent Commission for Overseeing the Implementation of the Constitution, said U.S. prison officials told only 300 of the nearly 3,000 detainees had legal cases against them.

He said he was told that that 2,700 others were suspected Taliban who were captured using intelligence that could not be used in a court.

"The foreign friends told us that based on the rules of the battlefield, they are dangerous and cannot be set free," Mr. Qazi told reporters Saturday.

Nevertheless, the commission repeated Karzai's demand of full Afghan custody of all prisoners as soon as possible, though it did not set a deadline.

"Inside Afghanistan, having a prison run by foreigners is not allowed with the respect of Afghan constitution," Mr. Qazi said.

It's unclear what would happen to those foreign suspects if they were turned over to Afghan custody.