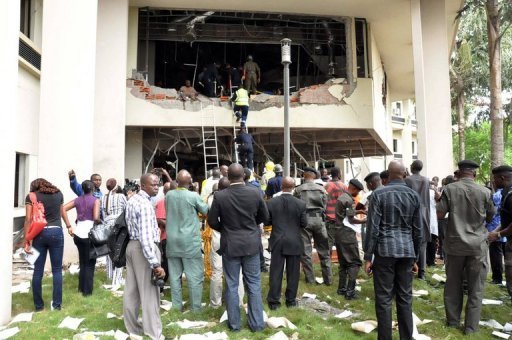 A radical Muslim sect attacked a church worship service in Nigeria’s northeast during assaults that killed at least 15 people, authorities said Saturday, as Christians vowed to defend themselves from the group’s widening sectarian fight against the country’s government.

The attacks by the sect known as Boko Haram came after it promised to kill Christians living in Nigeria’s largely Muslim north, exploiting longstanding religious and ethnic tensions in the nation of more than 160 million people. In the last few days Boko Haram has killed at least 44 people, despite the nation’s president, Goodluck Jonathan, declaring a state of emergency in regions hit by the sect.

Pastor Ayo Oritsejafor, president of the Christian Association of Nigeria, said Saturday that the group’s members would adequately protect themselves. He declined to offer specifics, raising concerns about retaliation.

Hundreds of people have been fleeing areas of north-eastern Nigeria, after a 24-hour wave of violence apparently targeting Christian communities.

More than 500 people have been killed by the group over the past year.
President Goodluck Jonathan, who is a Christian, said security forces would enforce the law "without fear or favour".
"I urge all Nigerians to eschew bitterness and acrimony to live together in harmony and peace," he said on Saturday in a televised address.

But Christian groups have accused the government of not doing enough to protect them.

Pastor Ayo Oritsejafor, president of the Christian Association of Nigeria, said his members would protect themselves against the attacks.

"We have the legitimate right to defend ourselves. We're also saying today that we will do whatever it takes" he said.

The pattern of the killings suggested "systematic ethnic and religious cleansing", he added.

The pastor declined to be specific about how Christians would defend themselves, raising fears of retaliation and an escalation of the violence.

At least 17 people were killed in Mubi, in Adamawa, as gunmen opened fire in a town hall where members of the Christian Igbo group were meeting.

They had been meeting to organise how to transport the body of an Igbo man who was shot dead by gunmen on motorbikes on Thursday evening.