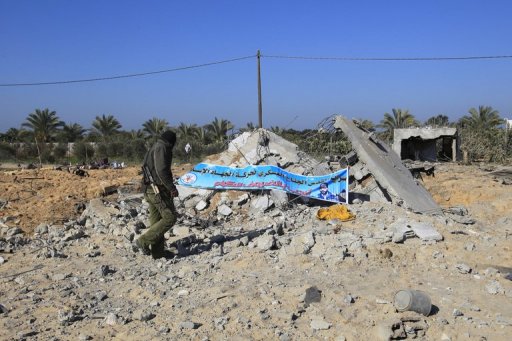 An Israeli air strike east of Gaza City on Friday killed one man and injured at least another, Palestinian medical officials told AFP.

The Israeli military said that the target was a group of men preparing to fire a rocket into Israel. Palestinian eyewitness said they saw militants in the area immediately before the strike.

"Aircraft targeted a terrorist squad that was identified moments before firing rockets at Israel from the northern Gaza Strip. A hit was confirmed, thwarting the rocket fire attempt," a military statement said.

"The aforementioned squad is responsible for the firing of rockets at Israel in the past number of days," it added.
Palestinians named the dead man as Moamen abu-Daff, but did not immediately link him to a specific militant group.

Both fell in open ground without causing injuries or damage.

Early on Thursday morning, Israeli warplanes targeted "terror sites" in central and northern Gaza in retaliation after rockets were fired across the border on Wednesday.

"Israeli air force aircraft targeted a terror activity site in the central Gaza Strip, and a terror tunnel in the northern Gaza Strip," a military statement said, indicating it was a response after five rockets landed in Israel, none of which caused any damage or injuries.

An earlier series of Israeli strikes overnight Tuesday had killed a Palestinian and wounded about 20 others, as the military struck what it described as "global jihad" targets who were planning cross-border attacks on southern Israel from the Egyptian Sinai.

On Wednesday, a senior Israeli officer said the military was preparing for a possible large-scale military campaign in Gaza if the Palestinians did not halt their rocket attacks.
"We are preparing and ready for an additional campaign... to renew the deterrence," Tal Hermoni, commander of the Gaza division's southern brigade, told reporters in remarks widely published in the Israeli press.

Israel's last major operation against Gaza was Operation Cast Lead, a 22-day offensive launched on December 27, 2008 that cost the lives of 1,400 Palestinians -- at least half of them civilians -- and 13 Israelis, including 10 soldiers.