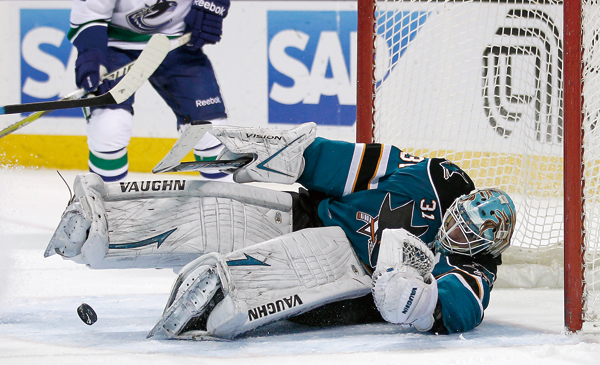 Andrew Ebbett redirected Kevin Bieksa’s shot into the net at 3:23 of overtime to give the Vancouver Canucks a 3-2 victory over the San Jose Sharks on Wednesday night.
Daniel Sedin and Ryan Kesler also scored for the Canucks, who won their second straight and for the fifth time in six games. Roberto Luongo made 33 saves and improved to 9-1-1 in his last 11 games.
Logan Couture and Joe Thornton scored for the Sharks, who lost their second straight after a four-game winning streak. Antti Niemi stopped 28 shots.
The Sharks were unable to take advantage of two power plays in the final five minutes of regulation.
Daniel Sedin gave the Canucks a 1-0 lead midway through the first period, picking up a pass from twin brother Henrik behind the net and forcing a wraparound into the net.
Kesler made it 2-0 early in the second with a power-play goal, scoring off a rebound of Alexander Edler’s shot. Kesler has scored in consecutive games twice this season.
Couture brought the Sharks within 2-1 midway through the second off an odd-man rush he created with an intercepted pass. He played give-and-go with Patrick Marleau for the score.
Thornton scored a power-play goal five minutes later to tie it. Marleau blocked Edler from getting to the puck behind the net following a faceoff, allowing Thornton a clear path to the net.