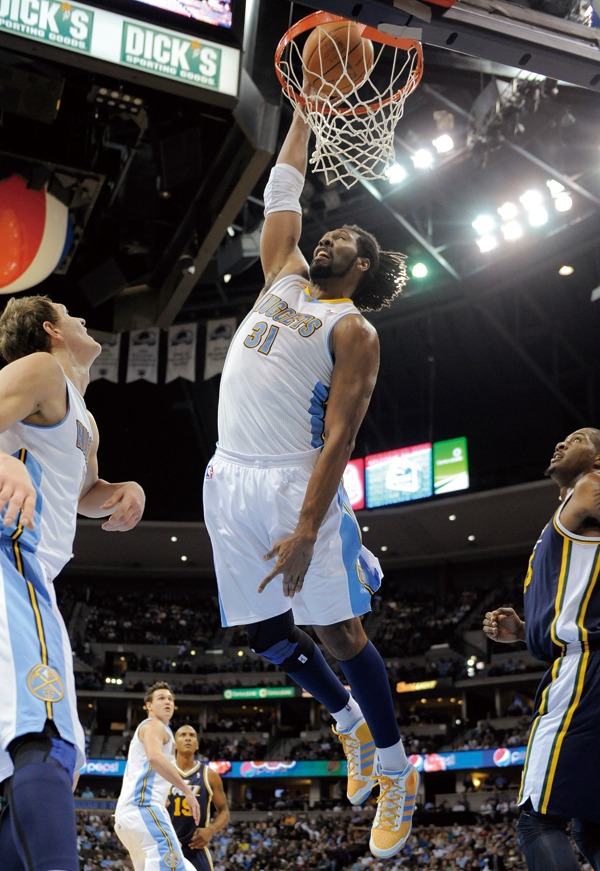 The Denver Nuggets’ fast-paced style is making everything look easy.
Nene scored 25 points, reserve Al Harrington had 18 points and seven rebounds, and the Nuggets rolled to a 117-100 victory over the Utah Jazz on Wednesday night.
Ty Lawson had 15 points and Danilo Gallinari had 11 points and five rebounds for the Nuggets, who have won their first two games by double digits. Denver is 2-0 for the first time since the 1985-86 season.
“Can’t complain about much tonight,” Nuggets coach George Karl said. “There are very few selfish basketball plays out there. There’s a sound commitment to playing the way the team plays best and that’s just attack, attack, attack.”
After some prodding by his teammates, Nene did just that in an efficient 24 minutes. He hit 10 of 13 shots, made all five of his foul shots and pulled down seven rebounds. He also sparked a decisive run in the first half that gave Denver control of the game.
“He’s so unselfish sometimes we have to say, ‘Nene, go the basket, get a bucket,’” Lawson said. “When he does that we know if he gets in trouble he can also find the open man. Sometimes we have to push him to get more aggressive.”
Al Jefferson had 19 points and rookie Alec Burks added 15 points for Utah, which was blown out for the second consecutive night.
Paul Millsap and C.J. Miles scored 13 apiece for the Jazz.
The Nuggets led 42-40 with 5:39 left in the second quarter when Nene took over on offense. The Brazilian scored 11 points the rest of the half and bounced a pass to Andre Miller in the lane to help Denver take a 63-46 lead into the locker room.
“Every night is a mismatch with him, as long as he’s aggressive,” Miller said. “We got the ball to him, made some cuts and played from there. Once he got some easy buckets it opened it up for everyone.”
Lawson, coming off a 27-point performance against Dallas on Monday, had five points in the run and fed Gallinari for a 3-pointer that made it 52-42 with 3:31 left in the second.
The Jazz, who lost by 25 at the Los Angeles Lakers on Tuesday, tried to get back into the game early in the third. They got within 13 on Jefferson’s three-point play, but a basket by Gallinari, a layup by Arron Afflalo and a dunk by Nene made it 75-56.
Nene scored his final points on a jumper to give Denver a 77-58 lead with 6:10 left in the third quarter. He left the game a minute later and watched with his warm-ups on while his team led by as many as 27 in finishing the rout.
“One pass and a shot. You miss those, they’re going out and running,” Utah coach Tyrone Corbin. “We talked about them wanting to create an up-tempo game and that’s to their favor. They’re great at it, that’s how they play. We wanted to control the tempo a little more.”
The Jazz improved their shooting against Denver but gave up easy baskets all night. Denver had 27 fast-break points and shot 53 percent despite missing 12 of its first 14 shots from behind the 3-point line.
“We somewhat fell apart,” Millsap said. “We lost focus. It’s still early in the season. We’re not going to make excuses about it. They came out and worked harder than we did.”