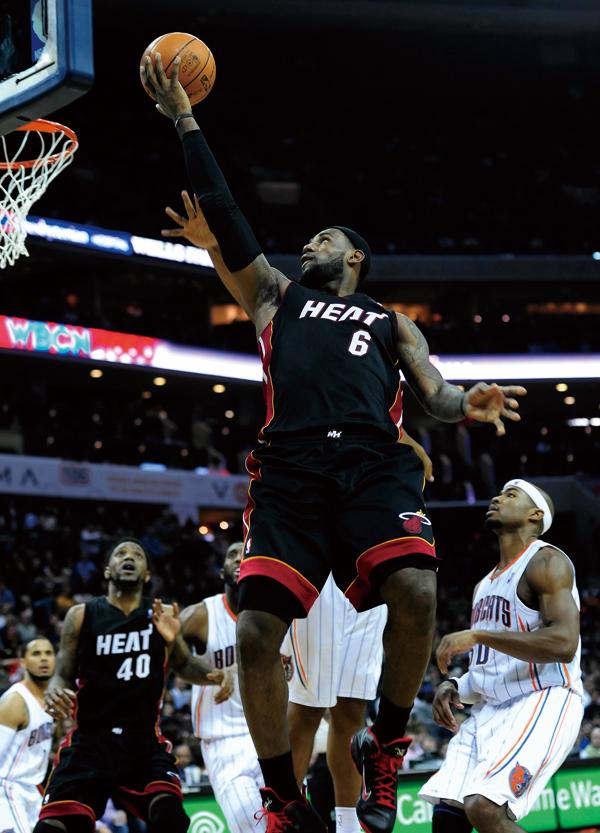 For most of Wednesday’s game in Charlotte, Miami Heat guard Dwyane Wade looked tired on the court and played that way. He even left the game with an injury.
The pain vanished in the final seconds; the tired legs won the game. Wade banked a shot off the glass with 2.9 seconds left to give the Heat its third consecutive victory to begin season.
In its first back-to-back games of the season, the Heat defeated the Charlotte Bobcats 96-95 after trailing for much of the game.
“I didn’t have any lift, so I got a glimpse of the rim and shot-putted it off the glass,” Wade said.
Bobcats guard D.J. Augustin defended the play well, but Wade found a tiny window to get off one of his signature moves. The Bobcats missed their chance to win it at the buzzer when Augustin’s three-point attempt missed its mark. Charlotte took a 95-94 lead with 12.2 seconds left on a three-pointer by Gerald Henderson.
A careless turnover by Wade with 19.6 seconds set up Henderson’s three-pointer. The Time Warner Cable Arena exploded, but the Heat had one more chance to steal away a game it had no business winning.
The possession before Henderson’s three, when Wade slashed to basket and passed up a shot for a poor pass, Heat coach Erik Spoelstra noticed a gap in the Bobcats defense. He called Wade’s number again but this time told him to finish the play.
“The play was there and we saw that he was able to get into the paint, so we ran a similar set and he was able to take advantage of it,” Spoelstra said.
Wade was surprised when he heard Spoelstra call his number in the huddle.
“I ain’t even going to lie,” Wade said. “When he called it, I was shocked because this guy (LeBron James) had it going and I wasn’t in the flow.
“I was about to say, ‘Let LeBron run it,’ but I said, ‘You know what? I’ll do it,’ and I embraced it after I thought about it.”
Wade was a surprising choice for the buzzer beater considering he was playing with an injured left foot and had four points before the fourth quarter. He was hit in the face during the first half and bruised his foot. Wade said he landed normally on the foot but felt pain.
“It’s just a bruise,” Wade said. “So, I came in (the locker room), iced down and taped it up a little different and try to come out and help my team win.”
Wade started the fourth quarter and played the entire period. Bosh played the entire fourth quarter as well, enjoying his best game of the short season. He had 25 points on 8 of 13 shooting to go along with six rebounds. He played aggressively and converted 9 of 14 from the free-throw line.
Charlotte led 60-45 in the first half, shooting 56.8 percent. The Heat shot 41 percent and was outrebounded 25-14 in the first two quarters.
“You’re going to win some of these games ugly, and you need to find ways to grind it out and in different ways,” Spoelstra said. “Charlotte came out and really jumped us.”
Led by Bosh, James and Mario Chalmers, the Heat buckled down on defense and held the Bobcats to nine points in the third quarter. Charlotte scored 35 points and shot 36 percent in the second half.
A fast-break dunk by Bosh cut the Bobcats lead to 79-78 with 5:34 to play and Bosh’s emphatic dunk against DJ White tied it at 86 with 3:28 to go. Bosh then delivered a key block against Corey Maggette in transition, which sparked a 6-2 run in the final minutes.
“Obviously the jumper isn’t working out for me,” Bosh said. “I think everyone saw that on Christmas. So I just want to get down in the post and be aggressive and make some aggressive moves to the basket.”
Just as he’s done since Christmas Day, James carried the team for most of the game. He finished with a game-high 35 points on 13 of 23 shooting to go along with six rebounds and nine assists. He was 9 of 9 from the free-throw line. Wade finished with 10 points and Chalmers had 15.
“Give a lot of credit to Charlotte,” James said. “They gave it everything they had. The first half wasn’t Miami Heat basketball. In order for us to be successful going forward, we have to defend.”