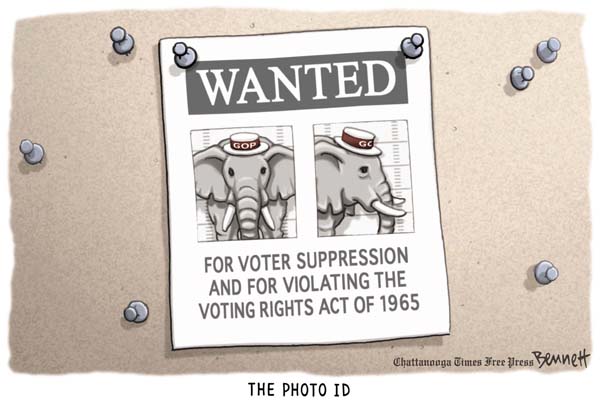 Only days until the Iowa caucuses! Can you believe it? Less than 8,000 minutes to go!
Perhaps this would be a good time to point out that the Iowa caucuses are really ridiculous.
Not Iowa itself, which is a lovely place despite being the only state besides Mississippi to never have elected a woman as governor or a member of Congress. (See if you can get to work on that, Iowa.) It has many things to recommend, including the Iowa State Fair, which, in my opinion, really sets the planetary pace when it comes to butter sculptures.
And Iowans are extremely nice people. I still have fond memories of the hot dog salesman at an aluminum-siding factory in Grinnell, who rescued me from the Steve Forbes for President bus during a snowstorm.
Iowa does have terrible winters. Which limits participation in the caucuses, where attendance is already restricted to registered voters who are prepared to show up for a neighborhood meeting at 7 p.m. on Jan. 3.
The Republicans, who are really the only game in town this year, hope to get more than 100,000 participants. That is approximately the number of people who go to Michigan Stadium to watch the Wolverines play football. However, the Wolverines’ fans do not get free cookies.
Maybe the Republicans will hit 150,000! That is about the same number of people in Pomona, Calif. Imagine your reaction to seeing a story saying that a plurality of people in Pomona, Calif., thought Newt Gingrich would be the best GOP presidential candidate. Would you say, “Wow! I guess Newt is now the de facto front-runner?” Possibly not.
Iowa caucus-goers are supposed to be particularly committed citizens who can make informed choices because they’ve had an opportunity to meet and interact with the candidates. Some of that does happen. In 2008, at the Democratic caucus I attended in Des Moines, there was unusually high support for Bill Richardson, mostly from people who said he had been to their house.
“Caucuses tend to foster more grass-roots participation,” said Caroline Tolbert, a professor at the University of Iowa and author of “Why Iowa?” – a question we should all be asking ourselves.
But, this year, the major candidates haven’t even spent all that much time in Iowa. Until recently, Gingrich only showed up for book signings and the occasional brain science lecture. And Iowa is actually not very good at picking the ultimate winner. The theory is that its caucuses winnow the field, that if you can’t manage to come in at least fourth, you are presidential toast. (John McCain came in fourth in 2008, with the support of 15,500 Iowans. This is approximately the number of people who live on my block.)
It’s that fourth-place goal that has Michele Bachmann, Rick Santorum and Rick Perry staggering around the state trying to visit all 99 counties and eat at least one meal a day at a Pizza Ranch outlet. (Pizza Ranch is a Christian-based, Iowa-based chain that has found success in the conviction that pizza tastes best in a cowboy-themed setting.)
“We have a good plan, and people like us,” Santorum told The Des Moines Register this week. “I hear this all the time. They say, ‘We really like you. You are on my list. You are No. 2 or No. 3 or No. 1,’ and that is a good place to be.”
People, if you had spent the last year doing virtually nothing but visiting with small clumps of voters across the state of Iowa, would you be energized when somebody told you he had you No. 3 on the list? At this point, polls suggest Santorum could come in anywhere from first to fifth. But he’s still like a kid who so desperately lusts after the most popular girl in the class that he is thrilled by being told he will be permitted to drive said girl and her date to the prom.
On Tuesday, our Iowa voters will go off to 1,774 local caucuses, most of which will be held somewhere other than the normal neighborhood polling place. Those who figure out where to go will have to sit and listen to speeches on behalf of all the candidates. Scratch anybody who was hoping to dash out of work during a coffee break.
History suggests that in some rural districts, the entire caucus will consist of one guy named Earl. History also suggests that the majority of the caucus-goers will be social conservatives, which is perhaps a clue as to why Rick Perry discovered this week that he was actually against abortion even in the case of rape or incest.
To summarize: On Tuesday, there will be a contest to select the preferred candidate of a small group of people who are older, wealthier and whiter than U.S. voters in general, and more politically extreme than the average Iowa Republican. The whole world will be watching. The cookies will be excellent.