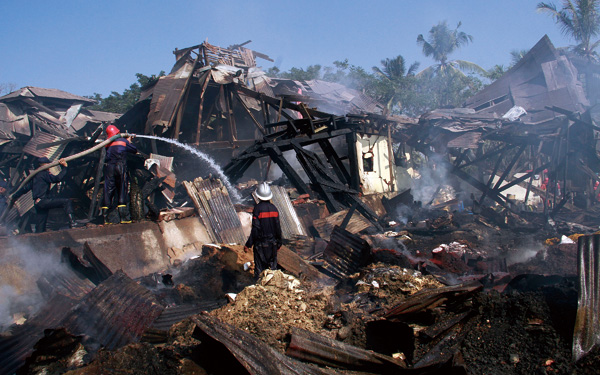 A fire followed by several explosions engulfed many state warehouses and neighboring homes, killing at least 16 people and injuring 108 in Myanmar’s main city of Yangon on Thursday.
The blasts occurred as firefighters were putting out the fire that had started in a state-owned warehouse before spreading to other warehouses and nearby homes and buildings before dawn.
The Yangon General Hospital’s emergency ward was in commotion as dozens of injured people and dead bodies were brought in by ambulances and pickup trucks.
A total of 108 injured people were brought in and more were continuing to arrive, said a senior nurse. She confirmed that 16 people had died.
She said the dead include at least three firefighters who were caught in an explosion during the conflagration in Mingalar Tahung Nyunt township in eastern Yangon.
The nurse did not want to be identified because she is not authorized to speak to the media.
“Many of the dead were hit by flying debris of broken walls and stone slabs that were flung on to the streets due to the explosion,” Maung Win, a 45-year-old resident, told the Associated Press.
The explosions knocked down buildings including a Buddhist monastery near the warehouse. Windows from the nearby buildings were shattered due to powerful explosions, witnesses said.
The explosions rocked the entire city, jolting residents from sleep. A 20-foot (6-meter) -wide and 15-foot (4.5-meter) -deep crater was visible at the site. Black smoke was seen billowing from the rubble Thursday morning.
Firefighters were searching for bodies from among the debris.
It was not immediately clear what caused the fire and the explosion.
Residents said the fire started in a warehouse that stored electronic goods and spread to another warehouse that stored some kind of chemicals. Officials did not immediately given any details.