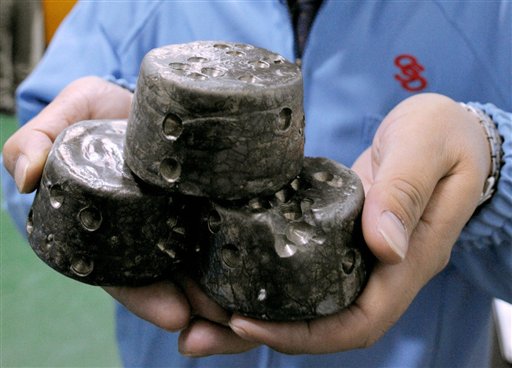 China announced a cut Tuesday in its rare earths export quota as it tries to shore up sagging prices for the exotic metals used in mobile phones and other high-tech goods.

China accounts for 97 percent of rare earth output and its 2009 decision to curb exports while it builds up an industry to create products made with them alarmed foreign companies that depend on Chinese supplies.

China's export restrictions have strained relations with the United States the European Union, Japan and other governments that have called on Beijing to remove its curbs and make its intentions clear.

Despite production and expor curbs, rare earths prices in China have tumbled as U.S. and European economic woes dent demand for its exports. The government ordered its biggest producer to suspend output for a month in October to shore up prices.

But the restrictions have made rare earths much mor expensive abroad, giving Chinese makers of products that use them a price advantage and foreign manufacturers an incentive to shift operations to China.

In a sign of unusually weak demand, the Commerce Ministry said actual Chinese exports of rare earths in 2011 totaled 14,750 tons for the first 11 months of 2011 — the equivalent of just 49 percent of the total annual quota.

In another possible move to tighten control over exports, the ministry's announcement Tuesday said only 11 companies will be allowed to sell abroad. That is down from 26 companies given licences for the first half of 2011.

Rare earths are 17 elements including cerium, dysprosium and lanthanum that are used in manufacturing flat-screen TVs, batteries for electric cars and wind turbines. They also used in some high-tech weapons.

The United States, Canada and Australia also have rare earths but stopped mining them in the 1990s as lower-cost Chinese ores flooded the market.

Surging demand has prompted ccompanies in Canada, California, India, Malaysia, Russia and other other countries to develop rare earths mines, some of which are expected to start producing by 2015.

Prices in China have fallen sharply since August, declining by 45 percent for neodymium oxide, by 33 percent for terbium oxide and by 31 percent for lanthanum oxide, according to Lynas Corp., an Australian rare earths producer.

Its figures showed an equally striking gap between prices in China and abroad, with lanthanum oxide costing triple the Chinese level on global markets, neodymium more than twice as much and terbium oxide near twice as much.