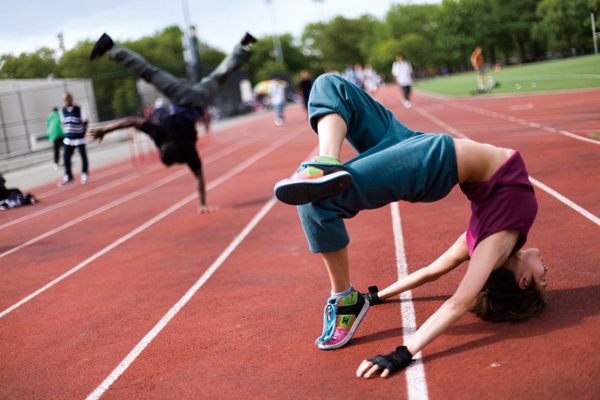 Aristotle believed circular motion to be a distinguishing characteristic of perfection. If you have ever seen a world-class runner cruise around a track, you may well agree that a body curving in motion is a sight of beauty.
On a snowy day in late October, Luis Galvan was not particularly quick or light as he trudged around the otherwise deserted track at McCarren Park in Brooklyn.
He was hunched forward against the wind, a red-and-blue umbrella protecting him from the onslaught of snow. More like a clumsily falling moon rock than a planet harmoniously orbiting the sun, Galvan did not seem concerned with beauty, but commitment.
“As a kid, I left my guts here on this track,” he said, breathing heavily as he shuffled through the sloppy snow. “And once you’ve gotten into a workout mode in your life, you can’t stop. You won’t stop.”
In New York City, bodies tend to rest in motion, so places like the McCarren Park track cater to the needs of the physically curious, the committed and the compulsive.
The track is a place of inspiration, blurred boundaries and shared sweat. Each curve has its function and every turn its task for the figures who are attracted into its orbit, until the track becomes a solar system all its own.
A 49-year-old man built more like a wrestler than a runner, Galvan grew up in Williamsburg, and in the 1970s competed in the mile and two-mile events for Automotive High School.
In the winter, the runners practiced indoors and often got sick from gas fumes, he said, so when spring rolled around, he and his teammates could not wait to hit the track.
“Over there,” Galvan said, gesturing at the 100-meter start line with his umbrella, “we ran sprints, 20, 30 at a time. Not easy for a distance runner who likes to cruise.” He laughed.
It is no secret that athletes, particularly those who are no longer competitive, like to recount their most gut-wrenching moments. Stories about withstanding physical pain, fear and embarrassment initiate athletes into an order that age, ethnicity, gender or preferred sport cannot dismiss them from.
A high tolerance for irritation, it turns out, is also needed at the McCarren Park track sometimes.
Built in 1910, under the reign of Robert Moses, the track served as one of this diverse neighborhood’s pulsing orbs of activity. When the pool opened across the street in 1934 with a capacity for 6,800 people, the track served as a place to heat up before cooling down.
Robin Perl, stretching in the ninth lane on a clear November afternoon, remembers the old days, when children in swimsuits would spill onto the track and the area was a hot spot for flirting and showing off.
“Teenagers would walk from the track to the pool and launch themselves into the water wearing their construction boots – that was very cool – and the girls would swim with just their T-shirts, no bathing suits,” she said. “Anything might happen around here in those days.”
In 2006, the New York City Department of Parks and Recreation committed $1.7 million to resurfacing the track to rubber and transforming the field from a mess of muddy ruts and grassy clumps to a blanket of kryptonite green. In 2008, $1.1 million bought stadium lights and updated the cross-fit gym, the courts and the landscaping.
Concentric circles of activity overlap from outside in, resonate, fuse, disconnect and then finally fade. Ringing the outer edge of the track are separate worlds unto themselves. Players toss silver balls on two petanque courts.
Nearby, break dancers spin in on themselves, galaxies of one, and the grass supports a single yoga practitioner, hugging himself tight in crow pose before shooting backward to plank.

Szymon, Kevin and Patrick, 11-year-old friends, hang out at the track to work on their abs. Kevin talks as he crunches through sit-ups.
“My stomach never hurts when I do these,” he said without losing his breath. “Maybe ‘cause I do 80 every day at home.”
Kevin, they all agree, is the best at sit-ups, but that does not mean they will not try to beat the record, which is 108. After 110, Patrick grimaces, exhales deeply and lifts his T-shirt to examine his muscles. The others assure him that nothing much has changed. A cellphone rings, the boys roll their eyes in a universally adolescent “it’s-the-parents” expression.
Kiki Morris might toughen up those boys if he had the chance. A personal trainer, former boxer and athletic provocateur, Morris can flirt most ladies into joining his workout program. For 15 years by his count, and at least 25 by others, he has taken ownership of the cometlike tail of the track, near the start line to the 100-meter dash, guiding groups through his specialized “traditional tribal fitness” workouts. Twice a day, he tucks his long, black dreadlocks into a hooded sweatshirt and exhorts people to “get out of the gym and into great shape.”
“Kiki is definitely the marathon mouth of the park,” said Robin Bowman, a photographer and park devotee. She had waved to Morris for years while walking her dog. One day, he called her over to the track with his wide smile. “Before I knew it, I had a jump rope in my hands,” she laughed. She has been training with him ever since.

The groups include all ranges of fitness, age and ethnicity. Some do not speak English. Many are middle-aged, trying to stop, if not reverse, the aged softness of their bodies. Others are at-risk children he trains without charge from neighborhoods near and far.

At 6:45 one morning, there are 31 people at the track, most of them runners, some of them walkers and one group of three in matching navy sweatsuits who stroll arm in arm. A father and his two children kick around a soccer ball before school. One man hits a tennis ball against a wall. A dog runs free near a crab apple tree.

“Running here is like playing Paperboy,” Liam Harrison, 32, an animator, says. “You know, that 1980s video game? You better be prepared for all kinds of obstacles.”

Harrison was a runner in high school but claims he took a break for 10 years to focus on his drinking. You would never know it, seeing him and others from the North Brooklyn Runners club ease gracefully out of the last lap of a 1,200-meter interval.

“I once tripped over a little kid,” he said, holding out his hand to suggest the height of a toddler. “And I rolled hard, real hard. She seemed fine.”

Close to the center of the field, pigeons lift upward in unison, whirling in a centrifugal flock over a weekend crowd gathered to watch the Polonia Soccer Club play the Shamrocks. After a lap of their own, the pigeons settle down, drawn by the crumbs from spectators’ hot dog buns.

“We come every Sunday after church,” said Pawel Galanty, 55, who plays in Polonia’s 40-and-up league.

Antoni Trzaskowski, 70, a coach for the team, first played on the field in 1969 when he traveled from Poland with the national team. He shakes his head and remembers dragging his own goals to the muddy field, ignoring the shady corners and the drug deals, listening to the textile manufacturing warehouses on Bayard Street, and fighting with other teams over who owned the field.

The new field seemed like a miracle that fell from the sky, a meteorite changing the surface of the whole neighborhood. With permits now carefully issued by the parks department, the field runs in an organized fashion with soccer, football and Ultimate Frisbee teams sharing the space in relative peace.

Not everyone feels as lighthearted about the renovation. Some turn a suspicious eye to the wealthy inhabitants of the nearby condominiums, completed just as the park renovation project was done.

And one mother will not let her children near the field, claiming the turf is toxic. Children playing pickup football shake their pant legs, and handfuls of the black pebbles roll out.

With winter weather coming, some track inhabitants will move indoors. But others will not be able to resist the track, pulled by something as mysterious and ordinary as gravity.

“I’ve been here a thousand times,” Galvan said from Lane 9, “but each time is like the first time. I guess I connect with that little kid who was me. He’s here, too, cheering me on.”