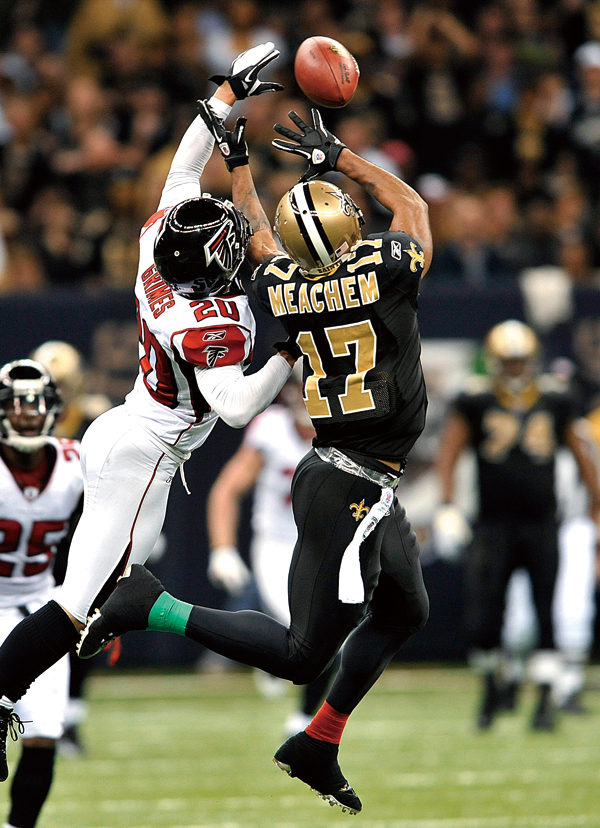 After Drew Brees broke an NFL passing record that stood for nearly three decades, his teammates called on him to make a speech in the Saints’ locker room.
“This record isn’t about one person. There might be just one name that goes in ledger under the record, but it’s really about the team,” Brees told his teammates. “I want everyone to feel a huge part of this, that this record would not have been possible without them.”
It was quite a night for Brees and the Saints — a record and a rout.
Brees set the NFL mark for yards passing in a season, breaking a record Dan Marino held for 27 years, and New Orleans wrapped up the NFC South title with a 45-16 victory over the Atlanta Falcons on Monday night.
Brees nearly topped Marino three years ago, finishing with 5,069 yards passing. But that pursuit rang a little hollow because the Saints were 8-8.
This time, Brees’ prolific passing has led New Orleans (12-3) to the playoffs and a legitimate shot at its second Super Bowl in three seasons.
“We all want this (record) very badly,” Brees began, “but it’s all about winning and we know if we just focus on that, all that other stuff will take care of itself.”
Brees threw for 307 yards and four touchdowns, the last a 9-yard strike to Darren Sproles that set the record with 2:51 to go.
It was Brees’ final pass of the game and it gave him 5,087 yards passing — with one game left. Marino finished with 5,084 yards for the Miami Dolphins in 1984.
Minutes after Brees broke the record, Marino offered congratulations on Twitter.
“Great job by such a special player,” Marino wrote.
As Sproles spiked the ball, Brees thrust his fist triumphantly in the air and started walking toward the sideline while the Superdome crowd went wild and his teammates chased him down. Offensive guard Carl Nicks was the first one to get there and tried to lift Brees onto his shoulder, but couldn’t do it as teammates swarmed around.
“If I could have put him on my shoulders and paraded him around the whole stadium I would have done that. He deserves it,” Nicks said. “It’s like a movie, man. Just a movie ending. It’s beautiful. ... You could tell by everyone’s reaction after he did it how much people care about that guy. We all love him.”

Brees pushed his touchdown total to 276, moving him ahead of Joe Montana (273) and Vinny Testaverde (275) for ninth on the career list. The former Purdue star is the first quarterback in NFL history to pass for more than 5,000 yards twice.

Brees’ first scoring pass went for 8 yards to Marques Colston and the second for 9 yards to Jimmy Graham. Graham’s TD catch was his 10th of the season, a franchise high for a tight end. In the third quarter, Brees hit Robert Meachem for a score from 24 yards to make it 28-10.
The Saints (12-3) also had 463 total yards, giving them 6,857 offensive yards for the season, breaking the 2008 club record of 6,571. New Orleans continues to close in on the NFL record of 7,075 offensive yards set by the 2000 St. Louis Rams.

Brees might have broken the record in the third quarter if not for Sproles’ 92-yard kickoff return, which set up John Kasay’s 29-yard field goal. Brees also threw two interceptions, but New Orleans was still dominant enough to take a big lead.

The game became a romp when Julio Jones was stripped by Scott Shanle and Malcolm Jenkins returned it 30 yards for a score to make it 38-16 in the fourth quarter. The Superdome crowd was in full celebration by then, but the play also meant fans would have to wait until later in the fourth quarter before Brees finally got his chance to break the passing record.

The Saints can earn the No. 2 seed and a first-round playoff bye with a win Sunday over Carolina and a San Francisco loss at St. Louis, which is 2-13.

Atlanta (9-6) is headed to the playoffs as a wild card.

Uncharacteristically, Brees had only a yard passing during a span of a little more than 18 minutes in the second half. Fans howled, “Drewwww!” each time he took the field, and he finally gave them what they wanted after Atlanta failed on a fourth-down try at its own 33. That gave Brees, who needed only 30 yards for the record at that point, just enough space to work with.

The Saints didn’t need another score, but Saints coach Sean Payton said he thought giving Brees a chance to go for the record was “appropriate.”

Falcons coach Mike Smith diplomatically deflected questions about that, saying only, “It is our job to go out there and stop them. It doesn’t matter if they are running the ball or throwing the ball.”

Matt Ryan had 373 yards passing and one TD, including an early 21-yard scoring strike to Jones.

“We didn’t really play well enough in any phase of the game to give ourselves a chance,” said Smith, whose team came in with a chance to stay in the hunt for the division title. “It’s not the type of effort that you want to have with so much on the line with what the outcome could have meant to our team.”

Pierre Thomas scored New Orleans’ first touchdown on a 4-yard run, after which he pulled a bow from his uniform pants, put it on the football and offered it as a gift to a woman with a parasol in the front row behind the end zone.

The referees weren’t cutting Thomas any slack on his Christmas-themed celebration, flagging him for a 15-yard unsportsmanlike conduct penalty.