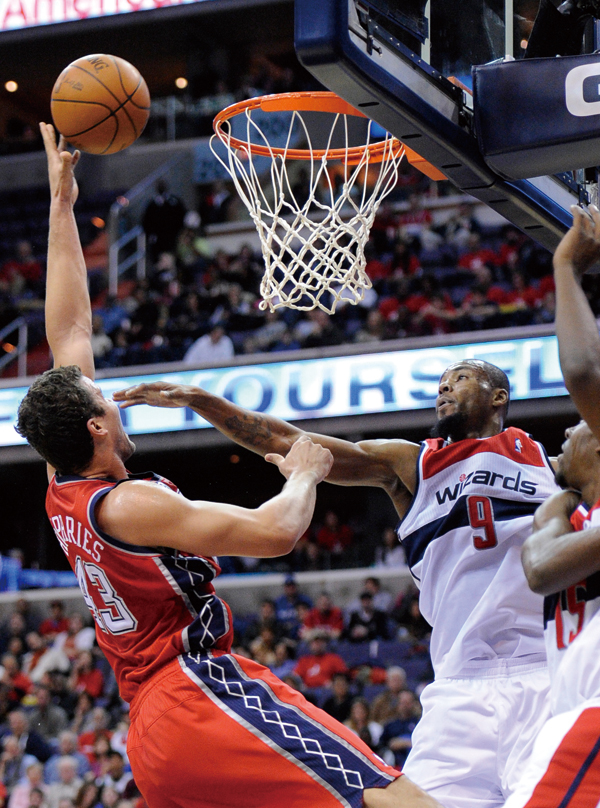 It took only one game for the new-look Washington Wizards to resemble their same old dysfunctional selves.
“Every body need to shut up I didn’t call out my coach or team mates I said I had a bad game need it n the post instead of jump shots,” Andray Blatche tweeted.
Blatche wasn’t happy after the 90-84 defeat in which the Wizards blew a 21-point lead, saying afterward he wasn’t being used to the best of his abilities. He scored 11 points on 5-for-13 shooting and was called for a technical for exchanging words with Kris Humphries
“You can’t keep having me pick-and-pop and shooting jump shots,” he said in the locker room. “Give me the ball in the paint.
That’s where I’m most effective at. I’ve been saying that since training camp: I need the ball in the paint. I don’t want to be the pick-and-pop guy that I used to be. It’s not working for me.”
Blatche has been known to be a bit of a wild card during his seven seasons in the Wizards locker room, but this outburst was exceptional because he had introduced himself as “your captain, Andray Blatche” to the crowd during a pregame speech — and because the team is only one game into the season, playing under the theme “New Traditions.”
If this keeps up, the Wizards could somehow manage to make even a lockout-shortened season seem long.
“It’s disappointing,” coach Flip Saunders said Tuesday. “But, look, we were all disappointed.”
Saunders met with Blatche before practice to sort things out.
“We talked about what he said about as far as wanting to be in the post,” Saunders said. “And I told him, that’s something to my ears. I love hearing that. ... But then he also has to understand that just because you get it at 17 feet, you don’t have to shoot it either. I’m not twisting his arm to do that.”
Saunders also clarified the captaincy situation. He said he plans to rotate captains for the time being because the team had such an abbreviated training camp. Blatche and John Wall served as captains for the first game.
“It was a situation last night, he’s been here longer than anybody else,” Saunders said. “And so we’ll rotate as far as who it’s going to be.”
Before the lockout, Saunders gave Blatche a book titled “The 17 Essential Qualities Of A Team Player.” Blatche has said he read about half of it.
At media day following the lockout, owner Ted Leonsis said: “I talked to Andray, and he understands that the fan base, media are all looking to take cues on can his focus and dedication match his skills.”
Blatche did not speak to reporters Tuesday, opting to exit the court through an alternate door after practice.
The closest thing to a captain-like comment came from rookie Chris Singleton, who already doesn’t care for the taste of NBA losing despite having experienced it only once.
“I don’t want it to be a recurring thing,” Singleton said. “I want to change this culture, and there’s too much losing the last couple of years. Some people might just like that. I’m not used to it, and I’m not trying to get used to it.”