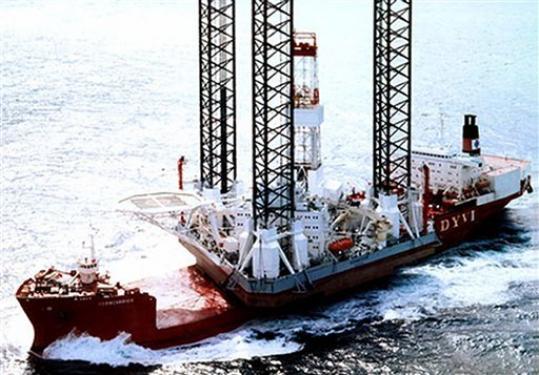 Rescuers are making efforts to search for 49 men, struggling with the extremely harsh conditions in freezing, icy waters off Russia's east coast after their oil rig capsized and sank due to fierce storms.

By nightfall Sunday, four men had been confirmed dead, 14 others had been plucked alive from the churning, icy waters by the ship that had been towing the Kolskaya drilling platform. But the search for the remaining men was hampered by freezing temperatures, a driving blizzard and strong winds.

Dmitry Dmitriyenko, governor of the Murmansk region in Russia's north-west where 33 of the men come from, urged friends and families not to lose hope late Sunday, but admitted the chance of the men surviving in the one degree Celsius (33.8 Fahrenheit) water is approaching zero.

"This is a terrible disaster which took the crew unawares," he said in a statement. "But there is still a chance."

The Emergencies Ministry said that 67 people had been aboard the platform as it was being towed about 200 kilometers (120 miles) off the coast of Sakhalin, a large island just north of Japan in the Sea of Okhotsk in the western Pacific Ocean that until the late 19th century had been the Russian Empire's most remote penal colony.

Of the 67 people aboard, 53 were crewmembers and 14 were workers and support staff, RIA Novosti news agency reported.

Airplanes and helicopters patrolled the area Sunday, but called their search off just after sunset. Ministry officials said two boats will continue the search throughout the night, and the air search team would return with another two ships in the morning.

The Transportation Ministry said the platform started sinking after a strong wave broke some of its equipment and the portholes in the crew's dining room.

One 5-meter (16-foot) wave washed away its lifeboats, leaving the crew with no escape, and several hours later it sank, officials said.

There were no immediate reports of environmental damage -- unlikely as the platform was not drilling for oil when it capsized and carried a negligible amount of fuel.a

The Kolskaya rig -- 70 meters (226 feet) long and 80 meters (262 feet) wide -- was built in Finland in 1985, and is owned by Russian offshore exploration firm Arktikmorneftegazrazvedka. It carried out work under a contract with Russian energy giant Gazprom.

Sakhalin is a largely undeveloped area, dominated by pristine nature. Russia, United States, Europe and Japan have worked off its shores for a nearly decade, producing oil and gas. There have not been any previous significant accidents in the region.

As oil and gas fields in Eastern Siberia are becoming depleted, Russian oil and gas companies are starting to shift their focus to offshore projects, unveiling ambitious plans to tap the riches of the Arctic.

Earlier this year, Exxon Mobil and Russia's largest oil producer Rosneft teamed up to jointly explore oil and gas fields in the Kara Sea with Exxon pledging $3.2 billion of investment on only three fields.

The Investigative Committee on Sunday opened a probe into the accident and said that it might have happened because of a breach of safety regulations, or due to the harsh weather conditions.

Alexei Knizhnikov, an energy policy official in Russia for the World Wildlife Fund, told the RIA Novosti that energy companies ought to learn from the accident.

"This disaster should highlight the high risks of offshore projects," he said. "It's very difficult to conduct efficient rescue operations, whether it's rescuing people or dealing with oil spills, in the weather and conditions of the Arctic."