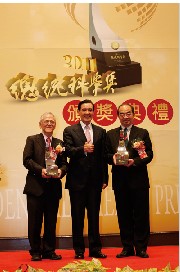 President Ma Ying-jeou awarded the two scientists at 5pm that day during a ceremony held at the Presidential Office.

During a press conference, Dr.Wong Chi-huey, president of Academia Sinica, and chairman of the 2011 Presidential Science Prize Steering Committee, praised the two winners for their outstanding achievements in scientific research.

"They are forerunners in the scientific field and models for the people of Taiwan," he said.

Mr. Wu Jin-lin, secretary-general to the President of the ROC, said that the two winners' extraordinary contributions to scientific research and development have been well recognized at home and abroad.

Dr. Wu Cheng-Wen obtained his doctorate in biochemistry from the Case Western Reserve University in 1969. He has made outstanding achievements in various biomedical fields including biophysics, biochemistry, virology, and cancer research. He was the first to demonstrate the four elemental steps of gene transcription: promoter binding, initiation, elongation, and termination.

Dr. Wu Maw-Kuen obtained his doctorate in physics from the University of Houston, Texas. From 1978 to 1989 in the US, he was proactively involved in superconductivity and magnetism research.

In 1990, he returned to Taiwan to organize a research team working on high Tc superconductors and other oxide compounds that exhibit strong electron-correlated effects at the Tsing Hua University.

Between 1990-2000 in collaboration with his colleagues at the Materials Science Center, his research focused on developing better processing parameters in order to improve the high Tc materials for practical applications. Quite a few breakthroughs had been made.

For the selection and awarding of the prize, the president of Academia Sinica had to convene a steering committee of 15 distinguished scientists and related cabinet ministers. The Presidential Science Prize is presented every two years, with no more than four winners on each occasion (without preference to category). The prize includes a monetary award of NT$2 million and a plaque.