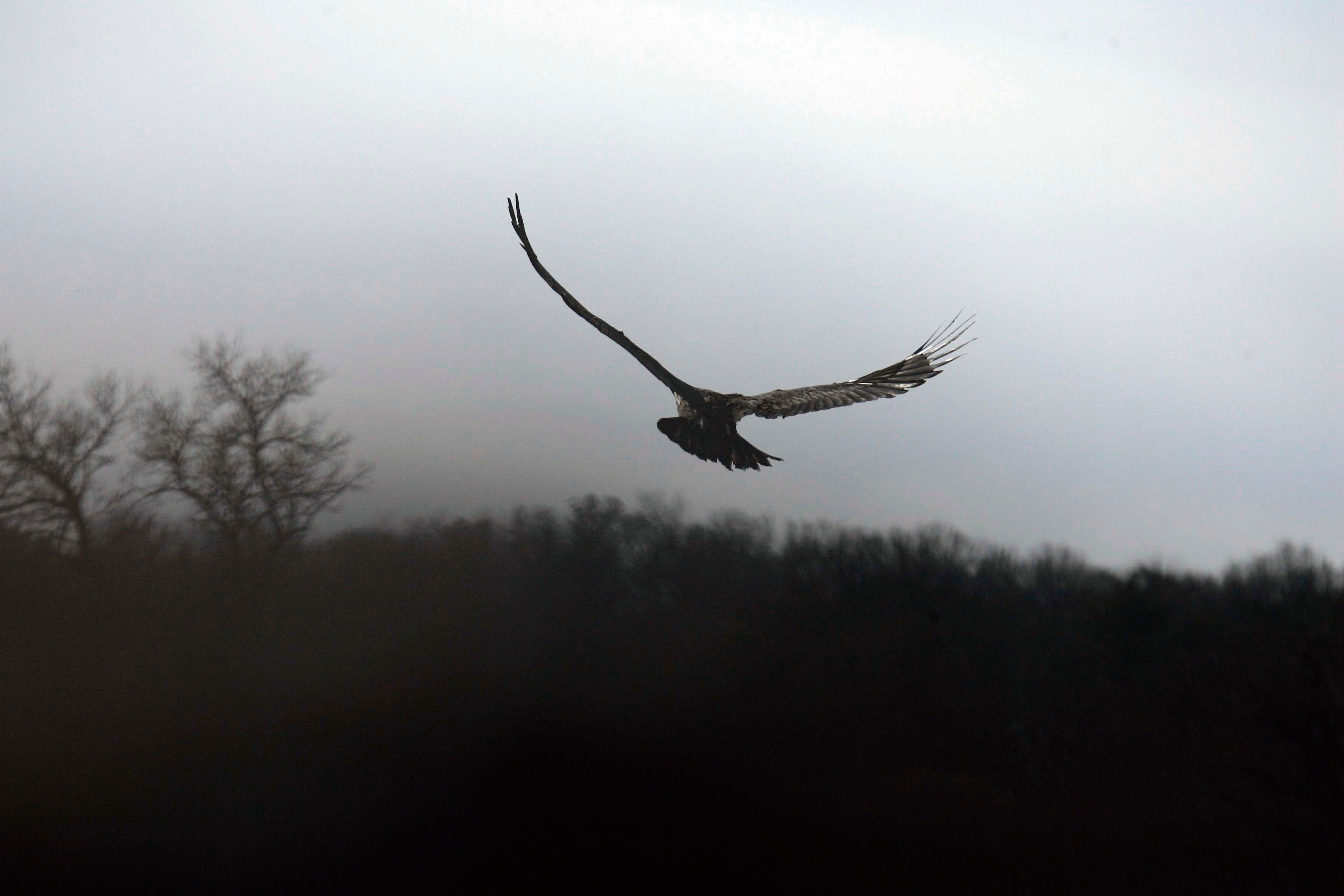 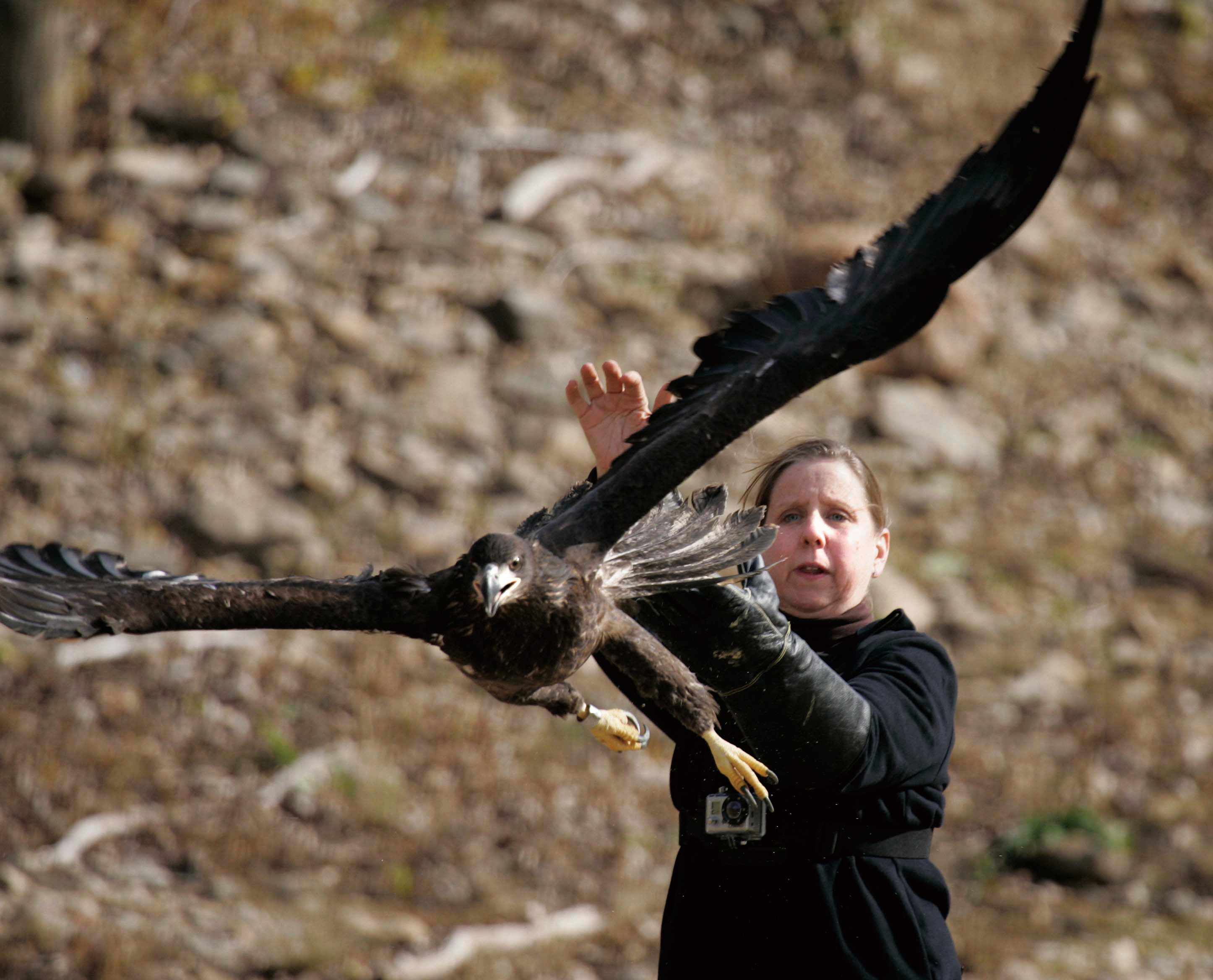 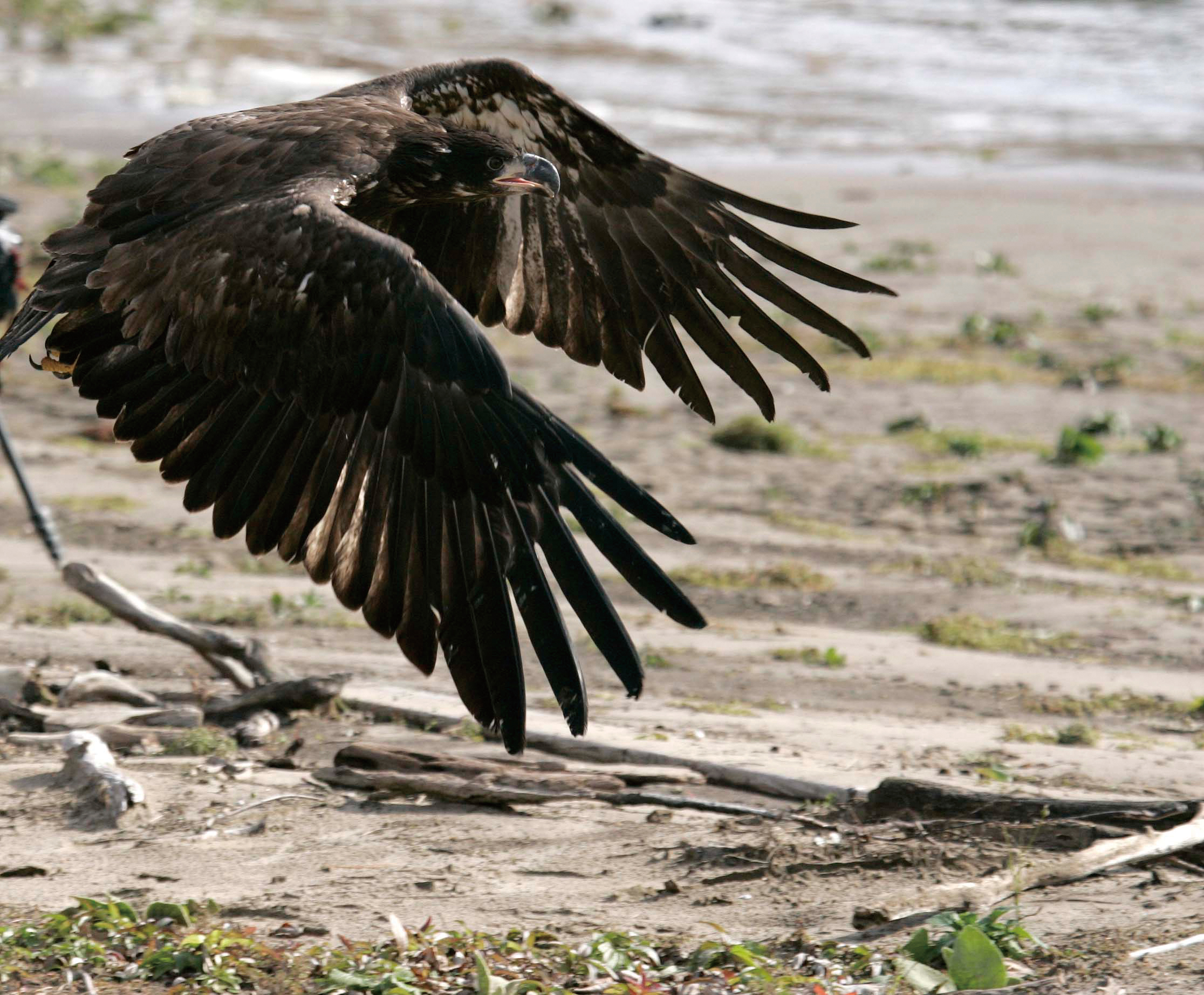 This crowd did not gather for a ball game or a protest, or to gawk at some sort of disaster. They came to the banks of the sleepy Illinois River to witness a little miracle — a happy ending, or an anxious beginning, depending on how you look at it.
Two young bald eagles were about to be released into the wild, more than five months after a storm blew them 85 feet to the ground from their nest, high atop a tree in suburban Chicago.
The crowd, hundreds of people by now, watched eagerly as a small ferry came around a bend in the river and into view.
On it were a small group of naturalists with two shrouded crates that carried the eagles. They were headed for Plum Island, about 100 yards from the crowd that had gathered at Starved Rock State Park in rural northern Illinois.
As the crew carefully, and quietly, transported the crates onto land, the onlookers cheered, and readied their cameras.
“Great day,” Dawn Keller said as she looked up at the blue sky on this recent warm, sunny November day.
Keller is the executive director of Flint Creek Wildlife Rehabilitation, an organization based in the Chicago area that rescued the eagles on Memorial Day. They were about 6 weeks old at the time.
Keller and her army of volunteers have rescued wild animals and countless birds — hawks, turkey vultures, owls. But this was the first time they’d rehabilitated eaglets and helped them learn to fly. Indeed, the fact that this release was happening in a state like Illinois is a testament to how far the bald eagle has come in the last 40 years.
Once in danger of extinction due to loss of habitat and use of pesticides such as DDT, the bald eagle has made a remarkable comeback in many states where it had struggled. They include some you might expect — Minnesota, Wisconsin, Washington and Maine, among them.
But the Mississippi River and the rivers that flow to and from it — including the Illinois River — attract a surprising number of bald eagles, many of which stay over winter because the waters where they fish don’t freeze.
And Plum Island, once slated for a development of cabins and a marina until a local Audubon Society chapter purchased it, is now a protected sanctuary where eagles like to congregate.
“On a good day, you might see 40 or 50 eagles on this island in the winter months,” says Marc Miller, director of the Illinois Department of Natural Resources. Eagle-watching at Starved Rock, he notes, now generates millions of dollars in revenue for the local economy around the park, also known for its scenic river bluffs and waterfalls and canyon hikes. Miller was among those who accompanied the eagles to the island.
But it was Keller, petite yet determined, who took on the task of releasing the eagles, both males with impressive wingspans already, but whose brown heads have yet to turn to the familiar white because they are still so young.
Wearing thick rubber gloves, she opened a crate, as the first of the two eagles put up a healthy fight. That is as it should be, Keller, an experienced wildlife rehabilitator, later said.
“We raise the animals to be wild. None of them like us. None of them thank us — and none of them pay bills,” she quipped.
Saving animals is not cheap. Flint Creek Rehab already had a flight chamber for smaller birds, but had to have a 100-foot enclosure built for the eaglets.
The total cost to raise them? About $20,000, not including food donations from a local grocery store.
Keller says it was well worth it to be able to experience this moment.
“Good luck, baby,” she said, as the first eagle extended its wings and flew out of her arms. It soared over the crowd, then disappeared into a forest of oak and hickory trees on the island.
“Good luck, buddy,” she said to the other, which made a bee-line for that same forest.
A mad rush of camera clicks echoed across the water each time.
Gloria Keeslar, a retired counselor from Rock Island, Ill., who has become a photographer and an eagle buff in recent years, was among those who captured images of each bird in flight. She had to be here, she said.
Even in below-zero weather, you will find her at a lock and dam near her home “clicking that shutter” in hopes of capturing an image of an eagle. She is nervous for these rescued eagles, but hopeful.
Because they are juveniles heading into the frigid winter, there is no guarantee they will make it.
But, Miller from the Illinois DNR says, their chances of survival are greatly improved because they can learn to fend for themselves by watching the more experienced eagles that come here to dine on fish that pass through and congregate at a nearby dam.
These eagles have already done remarkably well, given the fact that they weren’t even capable of flying when they were first rescued.
At the time, rescuers built a new nest for them in hopes that their parents would come back and care for them. But that didn’t happen.
Keller says it makes this release that much more satisfying because returning animals to the wild, whenever possible, is always the goal.
“Releases are really joyous moments for us. So I wasn’t sorry to see them go,” she said afterward. “I was really happy to see them go.”