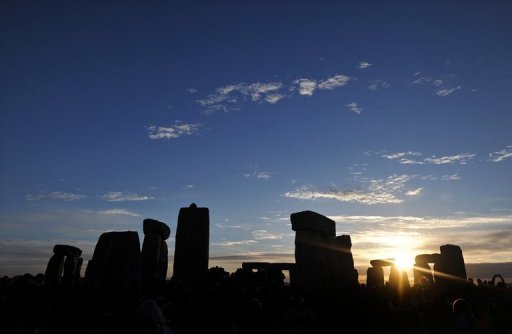 The Olympic torch will visit famous sights such as Stonehenge on its journey around Britain before the London 2012 Games, organizers said Monday.

The flame will also scale mountains, telescopes, take a ride on the train and a dash through a shopping center on its 70-day tour.

The flame is going on a 12,875-kilometer journey, with 8,000 runners bearing the torch for a mile each on its trip to the far reaches of the kingdom.

After being lit at Olympia in Greece, the flame will begin its journey on May 18 at Land’s End and continue for 70 days until the opening ceremony of the Games on July 27.

The relay will go within an hour’s travel time of 95 percent of the British population, taking in famous sports venues, historic sites and places of outstanding natural beauty.

After setting off from Land’s End, the torch will go to the 1,085-meter summit of Mount Snowdon, the highest peak in Wales, and then scale the giant telescope at the Jodrell Bank observatory in Cheshire, northwest England.

It will stop off for a ride in a TT sidecar on the Isle of Man en route to Northern Ireland, where it will visit the hexagonal basalt columns of Giant’s Causeway.

On June 8 the torch moves to Scotland, risking an encounter with the Loch Ness Monster before reaching John O’Groats, at the northwestern tip of Scotland.

The flame goes past the Angel of the North statue outside Newcastle on June 16, before it hops to a lantern for a ride on the Flying Scotsman train.

On June 25, runners will zip through the Victoria Arcade shopping center in Leeds, northern England, while the torch will visit the Stonehenge prehistoric monument on July 12.

When it arrives in London, it will spend the night in the Tower of London on July 20 before touring the city, heading down the River Thames from Hampton Court Palace to the Olympic Stadium for the opening ceremony.

A map of the torch route across the UK can be found at www.london2012.com/olympictorchrelaymap